Neglected neighborhoods in Indianapolis that have been targeted for development will soon have another way to attract investors.

More than 150 census tracts in Indiana—including 36 in Marion County—are expected to be included in a new federal initiative that provides a tax incentive for investing capital gains in low-income areas.

Dubbed, “Opportunity Zones,” the areas must have a poverty rate of at least 20 percent or a median family income no higher than 80 percent of the state median (or of the metro-area median, if that’s higher).

The program, which was created under the Tax Cuts and Jobs Act of 2017, allowed governors to nominate up to 25 percent of all low-income census tracts in the state for the designation. In April, Gov. Eric Holcomb recommended 156 tracts to become opportunity zones—the maximum amount allowed for Indiana.

The U.S. Treasury Department has yet to approve the recommendations but is expected to do so. Once that step is completed, the designations apply for 10 years.

Tedd Grain, deputy director of the Indianapolis office for the Local Initiatives Support Corp., said the group encouraged the governor to include neighborhoods the organization is already targeting. He said officials were pleased to see every area they’re involved in either overlaps or is completely included in the selected census tracts.

“We’ve been working in some of these areas for over 10 years, so we know them really well,” Grain said. “We just think it will accelerate the available capital for neighborhood investment, and our intent is to make sure that it benefits the inclusive growth agenda.”

Washington, D.C.-based Economic Innovation Group, which proposed the program in 2016, estimates $6 trillion of unrealized capital gains exist nationwide that could be poured into these neglected areas.

“It’s never been tapped into before for community development,” said John Lettieri, co-founder and president of the nonpartisan Economic Innovation Group. “We’re going where the capital is.”

So how do investors reap a tax benefit for supporting a designated opportunity zone?

Some details of the program are still being ironed out by the federal government, but the basic structure has been set.

Opportunity funds will be created by a variety of entities—possibilities include banks, economic development groups or organizations like LISC and Central Indiana Community Foundation. 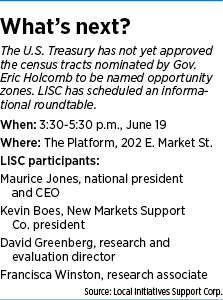 The funds need a targeted area or interest, but they have plenty of flexibility. For example, a group could create a fund for Midwest opportunity zones or for Indianapolis zones, or even one for health care facilities in Indiana zones.

Each fund must invest at least 90 percent of its assets in opportunity zones, but those investments can be spread throughout multiple zones.

Grain said one idea LISC is looking into is creating opportunity districts, similar to the neighborhood designations the group already has in place. Then a fund would be created for each district.

“What we will be doing is making sure that any of the opportunity funds will be set up so we can apply them to these neighborhoods,” Grain said.

Plus, any additional gains earned from the opportunity-fund investment are tax-free.

For example, an investor who sells a stock that results in a $1 million gain could put that money in an opportunity fund, avoiding a $238,000 tax bill that would come from a long-term capital-gains tax rate of 23.8 percent.

Then, in 10 years, if the value of the opportunity-fund investment grew to $2 million, the investor would pay $202,300 in taxes on the original $1 million gain and nothing on the second million.

Of course, it’s always possible the opportunity-fund investment doesn’t grow, although the tax reduction on the original gain would still apply.

“There’s no full safety net for the investor,” Lettieri said.

The 156 census tracts nominated by Holcomb are in 58 counties and include portions of 83 cities and towns. The areas cover a combined 1,000 square miles and the homes of more than 500,000 Indiana residents.

Marion County’s 36 nominated tracts are the biggest share. Boone, Hendricks, Morgan and Johnson counties each have one census tract on the list. Shelby County has two and Madison County has four.

None of the recommended census tracts are in Hancock or Hamilton counties.

Keeley Stingel, executive director of the Homeless Coalition of Southern Indiana, served on the governor’s committee that chose the recommended tracts. She said the group made the selections based on data and the nearly 2,000 suggestions it received from the public.

“The tracts include historic downtowns, areas in need of redevelopment, and other areas planned for growth,” Stingel said. “The selected tracts include rural, suburban and urban tracts that reflect Indiana’s unique makeup.”

Some of the Indianapolis areas on the list are already booming with development, including the Massachusetts Avenue and East 16th Street corridors, where a flurry of mixed-use projects have already been completed or are in the works.

The zones also cover a wide swath of land along the White River downtown, where local officials are discussing ways to better use the waterway.

All five of the neighborhoods targeted in LISC’s Great Places 2020 initiative overlap with the opportunity zones.

Each neighborhood already has a blueprint for the types of development and investment that would make sense for its community.

For example, the city has proposed to build its $572 million criminal justice center in the Twin Aire neighborhood, and LISC’s plan calls for new residential, retail and maker space.

Catherine Esselman, real estate development manager for Downtown Indy, said she’s pleased to see the zones overlap with areas that have projects in the pipeline.

“That makes it that much more attractive,” Esselman said. “It’s already attractive on its own merits based on complimentary developments, but it is another reason why an investor would choose this location. … It’s just icing on the cake.”

Lettieri said the funds are “really geared toward new creation” of businesses, rather than supporting established companies.

He expects the zones to attract a wide range of developments that could include housing, commercial uses, energy projects or startups that need space to grow.

He said he could see young entrepreneurs choosing the areas, because they will be more affordable places to invest and grow.

“Traditionally, [young entrepreneurs] can’t find the capital,” Lettieri said. “This gives them a funding path to be able to do that.”

Lettieri said more guidance and regulatory framework from the federal government are still forthcoming, so it’s likely capital won’t start flowing until later this year or early next year.

In the meantime, he said, communities need to create a strategy for what sort of investment makes sense for the designated zones.

“The incentive is just a tool,” Lettieri said. “It’s not a strategy on its own. And it’s not a solution to all the problems.”

The good news, he said, is that Indiana “hit it out of the park” on how it selected zones, because the Governor’s Office created an advisory group that included stakeholders from not-for-profits, other areas of the state, and business executives.

And LISC is already preparing for the next steps. The group has scheduled an event June 19 to discuss how the city can take advantage of the incentive and what it could mean for Indianapolis. National LISC President and CEO Maurice Jones is expected to attend, along with several other LISC officials.

“When we talk about the process nationally, we look at Indiana as one of the best in class,” Lettieri said. “That sets up the next stage very well.”•