Home » Ex-Lauth executive: ‘Every day is a struggle’ after a year of unemployment

Michael Hartman earned a six-figure salary as a vice president at Lauth Group Inc. until he was laid off in early 2008.
Since then, he’s struggled to find a job—any job that would allow his family to stay in their Westfield home.
Meanwhile, Hartman, 47, has emptied his savings, fallen behind on bills, and expects he will have to file bankruptcy even
if he finds a job soon. He talks about the harrowing struggle of unemployment.

As told to Cory Schouten.

I’ve sent out 600 resumes since I was let go. I even took a trip to
Texas, thinking it was the most recession-proof state, and set up six interviews.
One place said they wanted to hire me when they get funding, but of course they didn’t
get it. Five years ago, there might have been five or 10 applicants for a job. Now there are 300 applicants
for every job. You’ve got to beat out all of those people to get in the door. You can only job search so much and hope
the phone will ring.

Every day is a struggle. We’ve got a 4-year-old who goes to preschool
three days per week. I send him off, then sit down at the computer to job search for a couple of hours. CareerBuilder, Monster.
I’ve got an interview today. I’m going to try to sell my pants off.

Bill collectors are calling
on a regular basis. When you go from a salary of $147,000 to unemployment of $390 per week, you can’t sustain
that model too long. When I left, Lauth gave me a small severance package that lasted about 10 weeks. That was fortunate because
a lot of people at the end didn’t get anything. 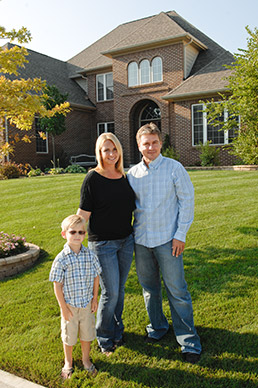 Mike and Nikki Hartman and their 4-year-old son Gavin stand outside the Westfield home they
hope to keep. (IBJ Photo/Robin Jerstad)

I started at Lauth in 1999.
Overall, they treated me pretty well. I was vice president of site engineering. At the
peak, 24 people across the country reported to me. We had to let go of about 70 percent of them in January
2008. They let me go in March.

My wife worked at Lauth, too. That’s how we
met. She was an administrative assistant. She left five years ago to be a stay-at-home mom. After losing my job, we needed
some other kind of income other than unemployment. She got a job at the Westfield Fire Department as executive assistant to
the chief. They loved her and she got the job over 200 or 300 other people. She makes about $30,000. It’s the joke of
the house—she sends out one resume and she gets a job. I send out 600 and get nothing.

I think
she’s frustrated, with all the network and connections I have, why someone out there doesn’t offer me
a job. I wrote a 12-page portfolio, I guess some people are intimidated by it. I also have a three-page resume I send out.
I guess I haven’t found the just-right combination. I’m either overqualified or underqualified. I liken myself
to The Three Bears.

After 20 years in engineering and real estate development, it’s kind
of hard to look for something different. I’m pretty much out of luck. They’re looking for transportation and wastewater
engineers; I have a professional land-surveyor’s license. I’ve tried to leverage my management and leadership
experience. I’ve applied for everything from a security guard to a manager at AutoZone to CEO jobs. I’ve tried
it all. My main focus obviously is to get an income so I can keep my home.

It’s been a year since
I made a payment on my house. I live in Oak Manor in Westfield. When we bought here, homes ranged from $450,000 to
$650,000. Who knows what they’re worth now? I haven’t received any foreclosure notification. Houses in my neighborhood
have been up for sale for two years. I don’t think the banks want them back that quick. They’re holding out hope
that people will figure out a way to keep their homes. Every day that we don’t have a mortgage notice is a victory.
Every day a sheriff doesn’t show up is a victory.

The banks have been awfully patient.
I think they would negotiate on terms. We have a first mortgage for $450,000 and a second mortgage for $100,000. I want to
talk to them but I don’t have anything to offer right now. I don’t have a job. I’m willing to pay whatever
I owe on it balance-wise, other than the fees, and refinance it. But again, I have no negotiation powers because I don’t
have a job.

I noticed my accounts at a local credit union had been closed. My son had a $700
savings account and they took it since it was attached to my Social Security number (and a defaulted second mortgage). I made
up my mind I was going to get his money back. I know it’s my fault and I know that I owe and deserve my money to be
taken away. But not a 4-year-old, that’s beyond comprehension. Their policy is not to take it from minors but it took
me calling a vice president to get any action. Eventually, we got the money back.

My credit cards are
all closed. A lot of them had gone into collection. I think I had one card with $10,000, the rest had $1,000 here
or there. The balances got kind of high toward the end because it was feast or famine. I had to use them for stuff around
the house. I didn’t use them for luxury items. I couldn’t pay anything after a while, so they shut me down.

We had leases on our vehicles, a Chevy Avalanche and a Chevy Trailblazer, both 2007s. We went and
turned them in, had to eliminate the car payments. I drive a 1996 Olds Aurora now and she drives a 2000 Ford Explorer.

Recruiters said last year that I should start a company doing real estate site investigation and engineering.
They said more firms would look to outsource those jobs. I made my own brochures and cards and started marketing it. Instead,
the opposite happened, and companies decided to train people internally to handle the functions. They began to focus on leasing
and filling existing space and stopped doing new development.

I’m trying to make a career change
with an MBA geared toward health care management from Indiana Wesleyan University. Health care will always be needed. I started
the online program in January.

We’ve had family members help us out monetarily here and there.
We have some frugal family members who have saved over the years, and we pay back what we can when we can.

My
oldest son is Derek. He lives in Fishers, just graduated from Ball State, and is in the management program at Mike’s
Express Carwash. His goal is to implement a business plan he developed in Ball State’s entrepreneurship program. Gavin
is 4. Very smart boy—obviously all parents say that about their children. He doesn’t understand the concept of
what’s going on. We try to tell him it’s just a phase we’re going through. Soccer is starting up soon.

We don’t do much now. Basically when I get my money I try to save as much cash as I can,
pay what I can to keep the lights on. The only extravagant thing we have is cable. If we eat out, it’s McDonald’s
for 10 bucks. We go to the grocery store, buy stuff and cook it here. Friends ask us to do things with them and we can’t
afford it. They offer to pay, but I’m too proud a person to do it.

This whole experience has really
taught us a lesson. We didn’t live beyond our means. We were putting money in savings, which we’ve depleted
now. But we have learned, even going forward, should I ever earn a salary like that again, we will never buy brand-new vehicles,
for one. We know what to live within. Our priorities right now are keeping the lights on, and paying for insurance, phone
bills and basic necessities.•