A sprawling network of pipes lurking far below the JW Marriott hotel under construction downtown will never be seen by
guests. Yet the PVC-like plumbing system is as integral to the tower’s design as its flashy façade.

The 34-story, 1,005-room structure, which will anchor a $425 million, four-hotel complex at West and Washington streets,
is slated to open by February 2011—in time to host Super Bowl visitors the following year.

Already functioning,
though, is a dewatering system that is keeping the depths of the upscale JW Marriott dry. Such a system is necessary because
the hotel’s three-level underground parking garage extends about five feet beneath the property’s water table,
which is roughly 30 feet below ground.

The city’s water table typically is higher in locations closer to
the White River, said Jeff Wylie, senior project manager at Indianapolis-based Circle Design Group Inc. The company, which
serves as the mechanical, electrical and fire-protection engineers for the hotel project, designed the underground grid of
pipes.

“In Indianapolis, especially in the downtown area, if you have a deep garage or deep basement, it’s
not uncommon to have a dewatering system,” Wylie said.

Another building equipped with the system is Market
Tower. Opened in 1988, it, too, has a three-level underground parking garage.

“You had a very limited footprint
to the building,” said Bill Browne, CEO of Indianapolis-based Ratio Architects Inc., which designed Market Tower. “At
some point the expense crosses the line and it makes more sense to [install a dewatering system] than not to do it.”

Installing such a system is fairly inexpensive because most of the material is PVC-type piping, Wylie said. Operational
costs of the pumps running constantly present the largest drain on the pocketbook, he said. 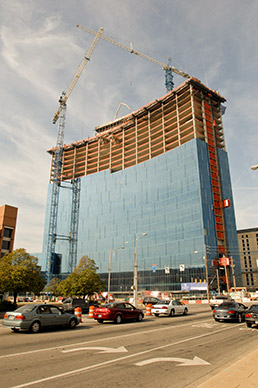 A warren of underground
pipes drains water from beneath a parking garage. (IBJ Photo/Robin Jerstad)

Vincent P. Drnevich, a geotechnical engineering
instructor at Purdue University and past-president of the Indiana Society of Professional Engineers, said the expense is justified.

“If you consider the cost of real estate,” he said, “they’re probably a pretty good investment.”

In New York City, which is surrounded by water, dewatering systems are quite common, Drnevich said.

At the JW Marriott, between 4,000 and 5,000 feet of perforated pipe are arranged in rows 30 feet apart—both horizontally
and vertically, like a grid—just below the parking garage floor slab. Water drains into the six- and eight-inch pipes
through the perforations and is collected in two large sump basins.

The basins are about four feet wide and
nine feet deep and are outfitted with two pumps each that together extract about 1,200 gallons—24 bathtubs full—a
minute around the clock.

“[The water] goes right to the river, which is where it was headed anyway,”
Wylie said. “We’re just speeding up the process a little bit.”

Each basin has two pumps in
case one fails. A backup generator is available should a power outage occur. In the event of a total system breakdown, relief
valves would allow water into the lowest level of the parking garage to prevent rising water from buckling its floor slab,
Wylie said.

Carmel-based REI Investments and Merrillville-based White Lodging are the hotel’s developers.
Jeremy Stephenson, vice president of development for REI Investments, said the underground system is insurance against “the
50-year or 100-year flood event.”

This is not the first time one of REI’s projects has required such
additional protection. The developer has installed similar pumps in other developments with underground parking, including
a Marriott in Louisville, Stephenson said.

Even so, developers mostly eschew the systems for two-level parking
garages, said Alan Tucker, a principal of Indianapolis-based CSO Architects. The firm, along with St. Louis-based HOK Inc.,
designed the JW Marriott.

Developers and designers of the hotel attempted to squeeze 1,000 parking spaces into
a two-level garage to avoid digging into the water table. But the size of the property and the design of the building made
it impractical, Tucker said.

Adding to the complexity of the project was the fact that contractors had to install
temporary wells to draw the underground water down far enough to complete the excavation of the property.

The
JW Marriott plans to use some of its abundance of water to irrigate plants and shrubbery.