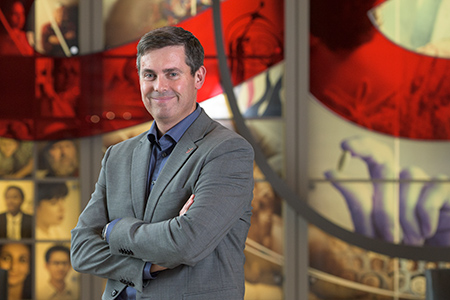 He’s supported candidates of both parties in Indiana; Republicans from states like Montana, Idaho and Nevada; and fundraising committees linked to GOP leadership in Congress.

And he’s not alone. An IBJ analysis of political giving by the CEOs of Indiana’s biggest companies (based on IBJ’s lists of largest companies by revenue) during this election found that 56 executives have donated almost $650,000 to nearly 92 organizations and candidates seeking federal office.

The list, which Ricks leads, includes the leaders of companies such as Simon Property Group, Duke Realty and OneAmerica Financial Partners. It does not include donations to state and local races and parties, and the election cycle is two years for all races, except the Senate, which has a six-year fundraising cycle.

Many of the CEOs donated to their own company’s corporate political action committee or their industry’s trade association PAC, which is common for executives. But the donations stretch far beyond that.

The leaders lean toward supporting Republicans, but several are not afraid to cross party lines. In fact, Democratic U.S. Sen. Joe Donnelly, who is in a tight re-election race against Republican Mike Braun, is the top recipient overall for donations from the executives. 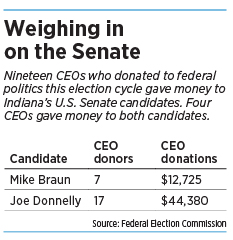 “These are the people who have disposable income,” said Sheila Krumholz, executive director of the Center for Responsive Politics. “They are a magnet for politicians from across the country who are seeking support.”

Most of the CEOs who have donated did not respond to IBJ for this story or were unavailable. But political experts and the two CEOs who did speak with IBJ said the contributions are generally motivated by a desire to be politically involved, knowing candidates personally or feeling passionate about certain issues.

“Most of my donations are to Democrats. I’m more in line with the Democrats’ values, but there are Republicans I’ve supported,” said Emmis Communications Corp. CEO and Chairman Jeff Smulyan, who has donated nearly $15,000 this election. “I think it’s very important for people to get involved, whatever their beliefs.”

Nearly 20 percent of all the contributions from Indiana’s top CEOs this election cycle went to their company’s corporate PAC or a trade association PAC.

Corporate PACs can serve as an extension of a company, donating to candidates and other groups that support the company’s goals, because businesses cannot give directly to candidates.

“Generally speaking, the PACs are mirroring the strategy of the company,” Krumholz said. “The PAC is giving very strategically to advance their legislative agenda.”

For example, J. Scott Davison, CEO, chairman and president of OneAmerica Financial Partners Inc., has given nearly $20,000, with the contributions nearly evenly split between the American Council of Life Insurers PAC and OneAmerica’s PAC, which both support the insurance industry’s interests.

“He represents the interests of more than 2,000 employees as well as all of the participants and policyholders who depend on OneAmerica to provide assistance and ensure their commitment to protect their families,” said a company statement provided to IBJ.

These types of PACs are largely funded by the company’s management team, which is why CEOs often put their donations there, Krumholz said.

“I think very often they are giving to the PAC because they want to be a team player and to support the company’s interests in Washington,” she said.

Plus, it could be a way for executives to encourage political involvement throughout their companies.

“They can sort of put their own money on the line to encourage others to do so,” said Eleanor Powell, assistant professor of political science at the University of Wisconsin. 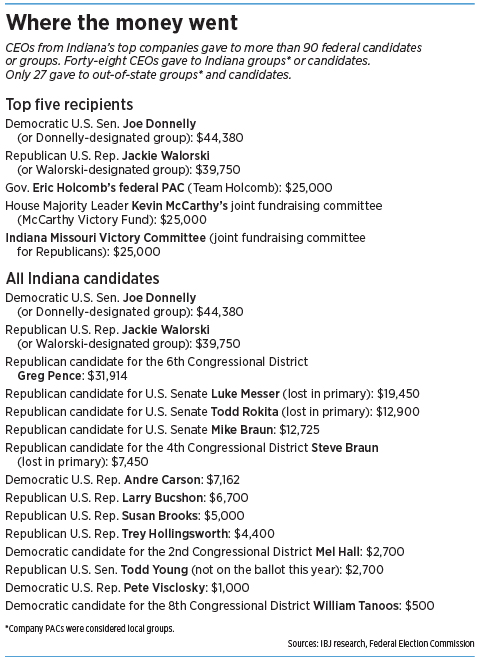 David Simon, CEO of Simon Property Group Inc., has donated $55,400 to Republican candidates or groups this year, including a PAC that supports President Donald Trump’s agenda, a joint-fundraising committee for U.S. Senate candidates in Indiana and Missouri, and the National Republican Senatorial Committee.

Business leaders usually are more conservative and that’s especially true in Indiana versus places like San Francisco or Seattle, according to Michael Malbin, co-founder and executive director of the Campaign Finance Institute.

“It’s not surprising to see them leaning more toward one party than the other,” Malbin said.

Powell said the emphasis on giving to GOP candidates or groups could also be because that’s the party in power right now. And CEOs want to make sure they have a foot in the door.

“It’s not that you’re trying to bribe people necessarily,” Powell said. “But [the CEOs] can make sure they get their opinion heard. When they call, someone is going to pick up the phone.”

Giving to both sides

But 16 executives still donated to candidates or groups of both parties.

Ricks, for example, gave $160,500 to Republican candidates or right-leaning groups, but also gave $22,800 to Democratic candidates or groups.

That includes $4,400 to Donnelly and $1,000 to Heidi Heitkamp, the Democratic U.S. senator from North Dakota who is also in an intense re-election battle.

“I want to make sure there are smart people that are balanced,” Murphy said. “I don’t agree with any of them on everything and I don’t expect to.”

“There are times I will give nothing,” he said. “I will tell you it’s not a great science. It’s just what tends to move me and what I feel good about doing.”

“Both of them, I think, have good values; they’re good people, even though they represent different political persuasions,” Murphy said.

Most of the time, when the Indiana CEOs split their giving, it favored Donnelly. Of the 16 who gave to both parties, 12 gave to Donnelly.

Only four executives overlapped and gave to both Donnelly and Braun. They were Ricks, Michael Petrie with Merchants Bank of Indiana, Phillip Terry with Monarch Beverage Co., and Mark Schroeder with German American Bank.

Marjorie Hershey, a political science professor at Indiana University, said even though corporate executives typically give to Republicans, it makes sense that Donnelly is the top recipient, because he is the incumbent.

“It’s to try to guarantee that, if they have something to say, the incumbent will listen to them,” Hershey said. “He is an incumbent, and he stands a fair chance at winning.”

The CEOs barely gave to any challengers this year. Even though they’ve collectively made donations in seven of Indiana’s nine congressional races, only two challengers have received money—Democrat William Tanoos received $500 from First Financial Corp. CEO Norman Lowery for his bid in the 7th District, and Hall received $2,700 from Murphy.

“Most giving is for the purpose of getting access to people who have power,” Hershey said. “That’s why challengers are at such a disadvantage.”•