Home » Are local governments ready for the storm clouds brewing? At least they have time to plan. 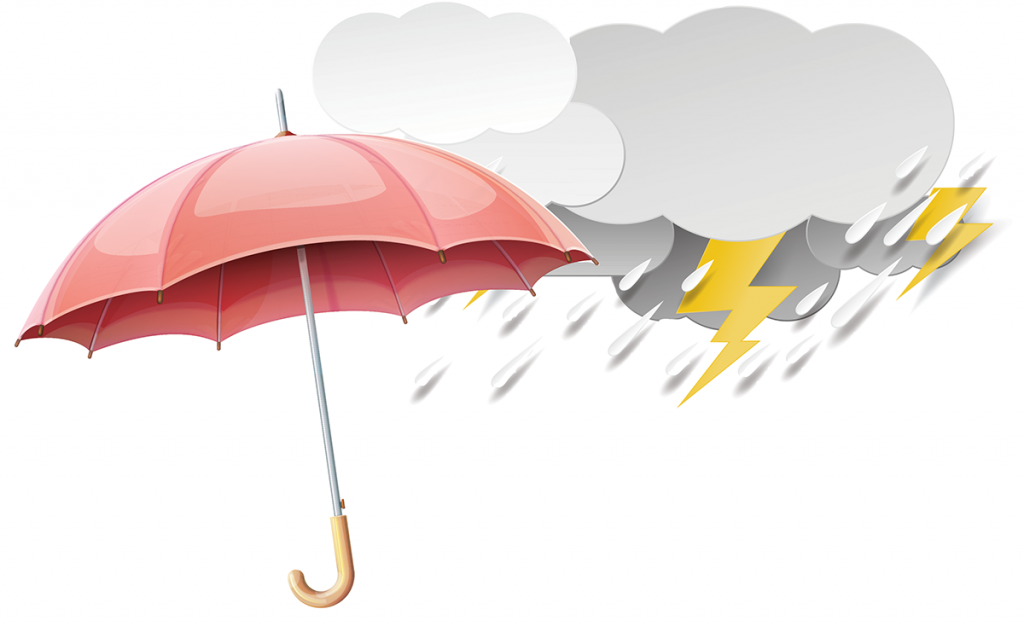 The economic downturn caused by the novel coronavirus will force some local governments to plunder their cash reserves, while others will likely be forced to cut their budgets to the bone.

City and county officials are grappling with the sacrifices they’ll have to make as plummeting employment, delayed collections and reduced economic activity cut into tax revenue. Though some are equipped with healthy coffers, others are deferring maintenance and suspending capital projects until they can determine whether their budgets have any fat left to trim.

“For most, this will be the challenge of a lifetime,” said David Bottorff, executive director of the Association of Indiana Counties.

Unlike private business owners and state government, local public officials will have a nearly two-year runway to prepare for COVID-19’s full impact on their primary funding streams. That’s because property and income tax disbursements are based on previous years’ assessments.

“They’ll be hit for sure, but at least they’ve got some time to plan,” said Larry DeBoer, an economy professor at Purdue University.

The study focuses on local option income taxes but also considers the smaller disbursements counties might receive from innkeeper’s, food and beverage, and gambling taxes.

Researchers found, under the more-optimistic scenario, that the state’s local taxing districts—think counties, townships, libraries, cities, towns and more—could lose a cumulative $299 million due to the impacts of COVID-19. That would be a drop in income taxes alone of about 8%.

If the local economy is slow to recover, that income tax number could be closer to $469 million, or about 12%.

“Our first scenario is especially rosy, suggesting a return to normalcy and baseline economic conditions in the second half of 2020,” the center’s executive director, Michael Hicks, said in a written statement. “Scenario 2 is more likely, suggesting continued economic performance well below baseline through 2020.”

Though local units of government have become more reliant on income taxes since the state-approved property tax caps in 2008, that funding is only a portion of what keeps local government afloat. The study does not consider potential impacts to property taxes, state aid for schools and roads, or potential federal stimulus funding.

If the nation does fall into a three-quarter recession, those revenue sources could drop significantly as well.

“We have been observing and participating in economic estimates of the impact of COVID-19 since January,” Hicks said. “The only consistent observation over this period is that every projection has worsened following later analysis.”

At least one impact is immediate for local government revenue.

Gov. Eric Holcomb signed an executive order in March that, among other things, waived penalties on late property tax payments for 60 days. As a result, some local governments are anticipating a cash flow problem as a significant portion of the payments they expected are delayed.

If a city’s or county’s reserves do run short, they might have to consider borrowing money through tax revenue anticipation bonds—essentially short-term loans paid back when a government receives money it is expecting.

The bond bank’s executive director, Mark Wuellner, said 52 government bodies have responded to a survey gauging interest in the midyear loans. During a typical year, that number is closer to two or three.

But a number of city and county officials say their rainy day funds and other cash reserves should be enough to get them through the lean times.

“For the last 10 years they’ve been developed, rainy day funds have largely been designed as a tool for flexibility. Now, it’s raining,” DeBoer said.

Matt Greller, CEO of Accelerate Indiana Municipalities (formerly the Indiana Association of Cities and Towns) said even those local governments that find themselves with healthy reserves will likely defer maintenance and ongoing capital projects.

“It’s a lot of patchwork fixes.”

“We have been said to be in the best financial shape of any unit of government, besides the state,” McKinney said. “But we’re going to be prudent and watch new projects over the next one to three years—however long it takes.” 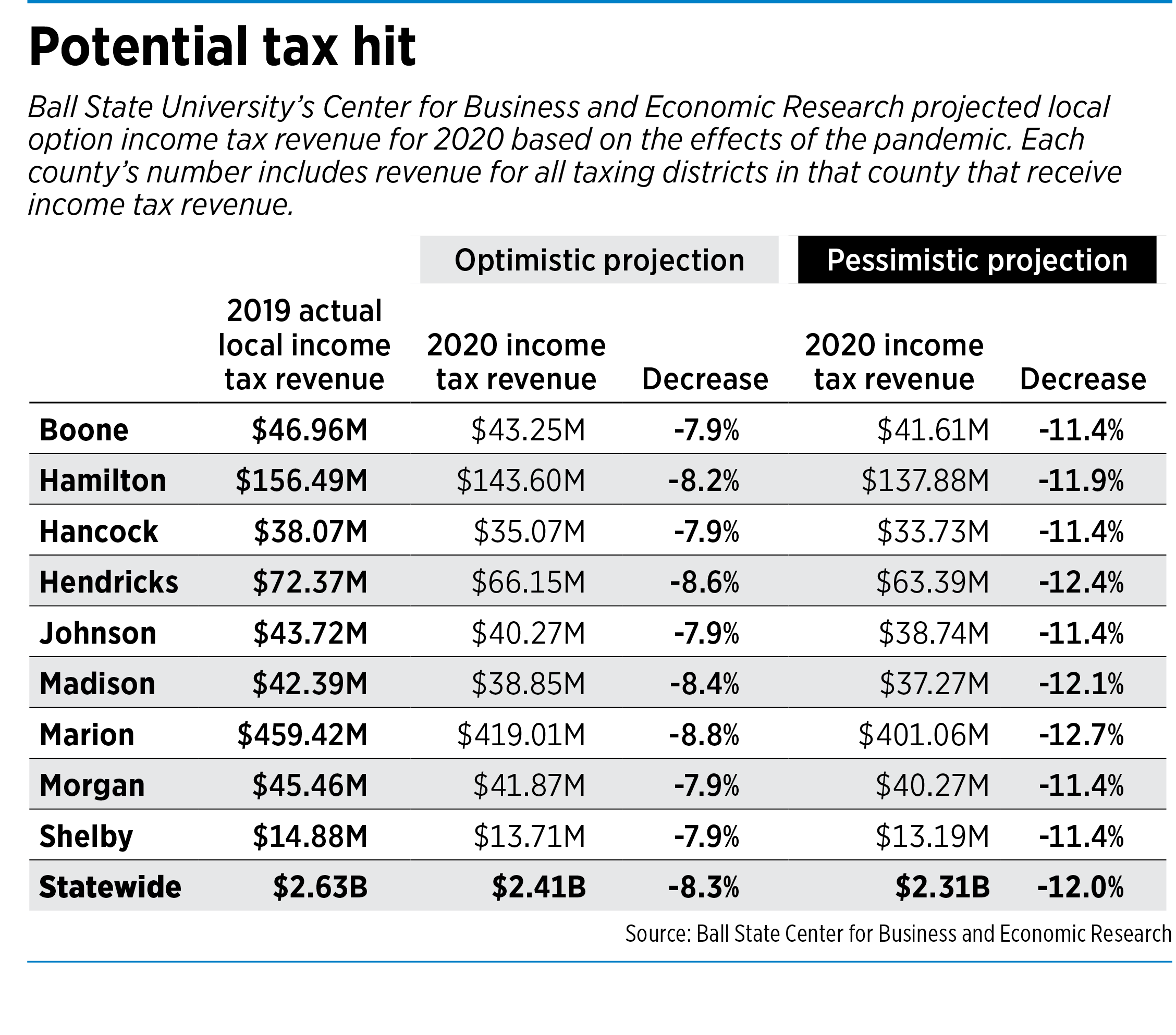 He’s confident, though, that Hamilton County’s $55.3 million in reserves is enough to prevent any layoffs or major disruptions to county activities.

“It’s definitely a situation where we think we’re going to have to reanalyze or reprioritize certain things,” McKinney said. “The county council is confident we can take care of those projects on our plate.”

Even so, McKinney said county officials are holding off on using cash for some projects, including $15 million to $20 million for a judicial center expansion and an anticipated $5 million to $15 million in cost overruns on improvements to State Road 37. Those projects might still move forward, he said, but they will likely have to be financed by bonds rather than those cash reserves.

The Association for Indiana Counties’ Bottorff said, for the most part, local governments throughout central Indiana have enough financial reserves to adjust without much disruption. It’s those counties that were already teetering near the edge that will need help.

Anton Neff is board president for the Association of Indiana Counties and an Owen County councilor. He and his fellow council members have already cobbled together alternative funding sources this year to address the $900,000 tax revenue shortfall created by a filing error.

“In all honesty, part of that was buying time until the next budget year when revenues would normally increase,” Neff said. “We’re going to be faced with a little bit more of a challenge, just starting from behind.”

Though Owen County was able to mitigate that blow with some line-item adjustments and deferred vehicle replacements, county officials are returning to the budget now to see whether delayed improvements to the county jail and other facilities might make up for the next shortfalls caused by the pandemic.

If they don’t, Neff said, the county might not be able to give its employees pay increases next year and it might institute a hiring freeze. He said officials will know more when they meet for a budget planning workshop in the next month or so.

“Right now, we’re reacting to the issues at hand,” he said.

Mayors across Hamilton County are generally optimistic about how far their cash reserves will carry them.

Jim Brainard was 12 years into his nearly quarter-century tenure as Carmel’s mayor when the 2008 recession struck.

“We had far less in savings then, but we still managed to get through without a tax increase. We paid our bills and did not have to lay off any employees,” Brainard said.

The city did cut $3 million in road paving projects for one year and reduced that spending by half in the following year.

But Brainard doesn’t anticipate having to make those cuts this time. He said the city ended 2019 with $11.9 million in its rainy day fund, and has $50 million in other unencumbered reserves.

“That’s very healthy for a city our size. We’ve been putting money away for several years knowing, at some point, something was going to happen,” Brainard said. “This went on for year after year during the Great Recession, and I don’t anticipate that happening this time. If we get people back to work in 60 days, it’s going to be a very small blip.”

In Noblesville, City Controller Jeff Spalding said the city has reserved a portion of its income tax revenue distributions each year for times like these. As a result, the city has $17 million in its rainy day fund and another $15 million in its general fund.

“From that standpoint, we’re in a fairly enviable position to respond to the news as it plays out,” Spalding said. “I am probably a less doom-and-gloom type of person, but that doesn’t mean there won’t be challenges. There are always challenges.”

Already, Fishers has canceled all training and travel for the rest of the year that isn’t required to maintain a license or other accreditation. The mayor has also decided not to fill any vacant positions, and officials are working to lock in fuel costs as far into the future as possible.

“When you have revenue challenges in your operating revenue, the only way to really address that is to curb your expenditures. Most of our capital projects will continue moving forward,” Fadness said.

Barring any unforeseen expenditures, he said, Fishers has enough in its reserves to last four or five months. He’s not leaving it to chance, though.

“We are in the same purgatory as the financial markets, the stock markets, as small businesses,” Fishers said. “It’s not only the current situation we find ourselves in; it’s that so many variables are unknown. Until those variables are identified, you’re going to see a lot of us play a conservative role.”

Cities elsewhere are taking a different approach to saving for the future. Greenwood is pressing pause on any project that hasn’t already been funded.

“We have several things that would be considered shovel-ready,” Wright said. “If we were able to get some of that stimulus money coming through the federal government, we could still get those projects funded.”

Some of the estimated $2.6 billion in federal funding provided by the CARES Act will trickle down to local governments, but it’s unclear how much. The law requires 45% of a state’s fund be set aside for local governments with populations of 500,000 or more, but in Indiana, that would apply only to Indianapolis.

“We have sufficient cash in our property tax funds to support our operations through a downturn,” Wright said. “The capital is the main thing that would have to be paused or done over several years instead of a year or two.