Home » Banks are beefing up their loan-loss reserves

Banks in Indiana and elsewhere have recently begun bulking up their reserves against possible loan losses—though they also say they don’t yet see clear signs of trouble ahead.

Despite fears of a recession in the broader economy and outright softening in the tech sector, banks aren’t reporting signs of trouble in their loan portfolios. At the same time, many banks that were reducing their reserves last year are now building them back up.

“We’re in a very interesting point at the emergence of the credit cycle right now,” said Scott Siefers, a New York City-based senior research analyst and managing director at Minneapolis-based Piper Sandler Cos. “I think we all intuitively have this sense that tougher days are emerging, and likely will be with us several months from now and perhaps into next year—but we’re just not seeing any actual deterioration now.”

Siefers’ focus is on banking, and he follows companies that include Evansville-based Old National Bank and Muncie-based Merchants Bancorp. 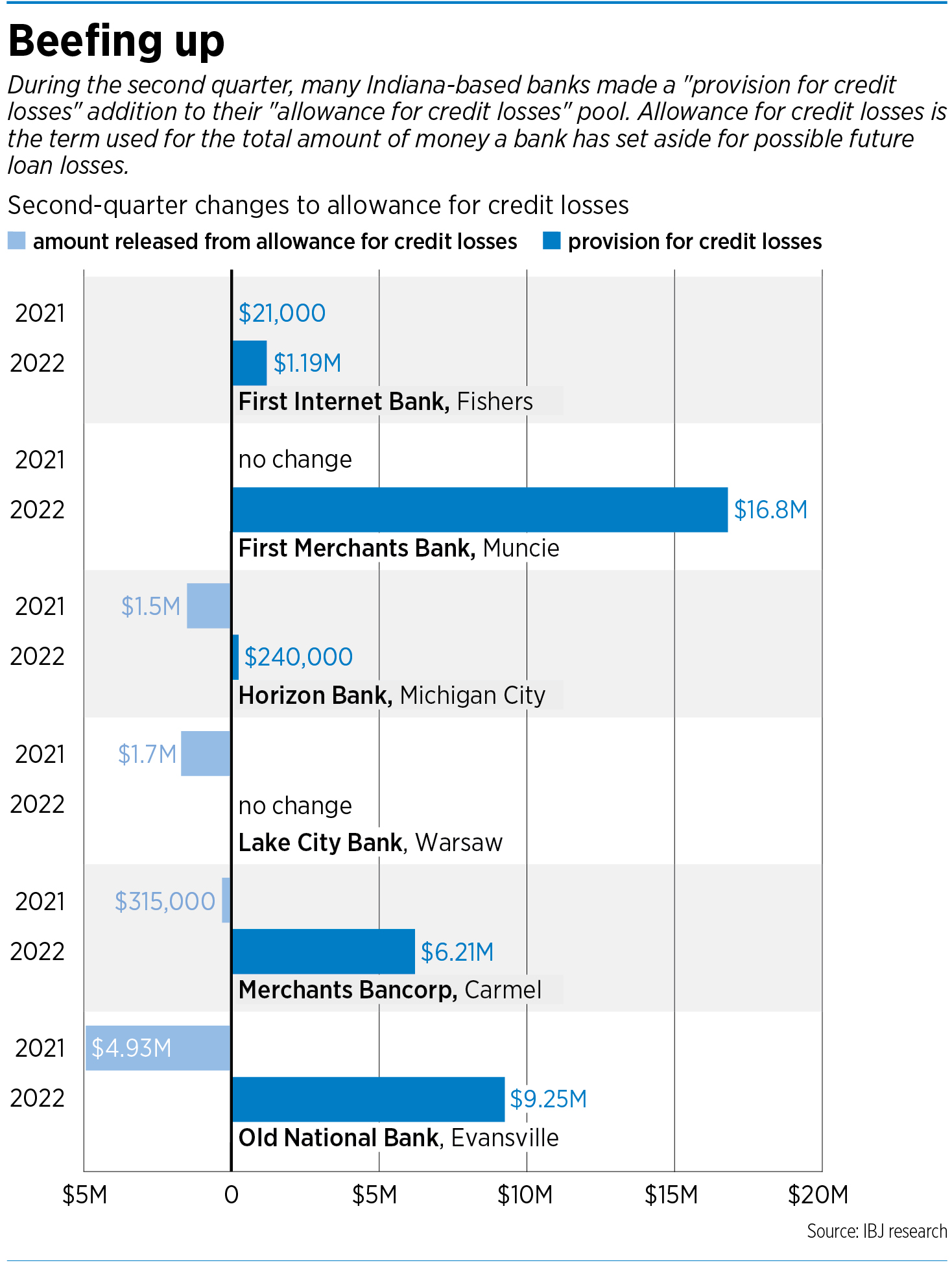 Each quarter, banks decide how much money they will set aside to cover possible loan losses. This amount, which is called a provision for credit losses, can vary from quarter to quarter. If a bank believes it might incur greater losses in the future, it can increase its quarterly provision. If a bank feels its reserves are sufficient and credit quality is strong, it can also record a negative provision by releasing some of its reserves.

In early 2020, banks made huge provisions for credit losses because they feared the pandemic would trigger a wave of loan delinquencies. Those delinquencies didn’t happen, and in fact credit quality has been much stronger than anticipated since then, with many banks paring back their reserves because their loans were performing so well.

Much of the reserve-building last quarter, Siefers said, is related to the fact that loan balances are growing. As a bank’s loan portfolio gets bigger, so does the amount needed to protect against potential losses.

Nathan Stovall, an analyst at S&P Global Market Intelligence, said S&P “fully expected” banks to increase their credit-loss provisions this year, in part because of overall loan growth and in part because credit losses are expected to return to more normal levels over the next year.

“You couldn’t have this abnormal [low] level of loan losses continue,” Stovall said.

But he emphasized that he does not anticipate a hard downturn ahead. “I just don’t think that we are in a situation where we’re going to see severe deterioration in the near term.”

Old National said both loan growth and caution played a part in the bank’s adding to its reserves last quarter.

During the second quarter, Old National added $9.25 million to its credit-loss reserves. That’s a noticeable swing from the same period a year earlier, when the bank released $4.93 million from those reserves.

But economic uncertainty was also a factor in Old National’s decision to add to its reserves, he said.

The bank doesn’t see clear signs of trouble ahead, Falconer said, but “the [banking] industry has had a track record of incredibly good credit quality for quite some time now … at some point, it just has to get back to normal.”

Nonperforming loans made up just 0.2% of total loans last quarter at the bank; a year earlier, that figure was 0.19%.

But Lake City is also carefully watching the economy.

“We are closely monitoring the impact of ongoing supply chain challenges, the impact of inflation and rising interest rates on our borrowers, and broader economic conditions,” President and CEO David Findlay said in Lake City’s second-quarter financial announcement, released July 25. “While we are pleased with our overall loan quality measures, we will continue to look for any signs of a potential recession.”

At Fishers-based First Internet Bank, nonperforming loans made up 0.15% of the bank’s total loans last quarter, which Chairman and CEO David Becker said is “very close to an all-time low for us.”

First Internet focuses on commercial banking, though it does have some consumer business, including a long-standing business in financing individual RV and horse-trailer purchases. Despite inflation and high gas prices, Becker said, the bank has not seen any rise in delinquencies in its RV lending portfolio.

The quarter-over-quarter increase, Becker said, was “100% due to loan growth.”

JPMorgan Chase & Co. CEO Jamie Dimon made headlines in June when he advised investors to prepare for an economic “hurricane.”

Becker disagrees with that outlook, predicting that any upcoming turmoil will be more like a tornado—a targeted problem that causes trouble for individual borrowers rather than a systemic problem that sweeps through and affects many.

Becker also acknowledged the complexity involved in forecasts when so many factors are at play, including strong employment numbers but also high oil prices, troublesome inflation and the ongoing war in Ukraine.

“I don’t think there’s an economist alive today that’s tried to run a crystal ball with all the factors in the world today,” he said. “The jury’s still out as to how this thing’s going to end up.”•