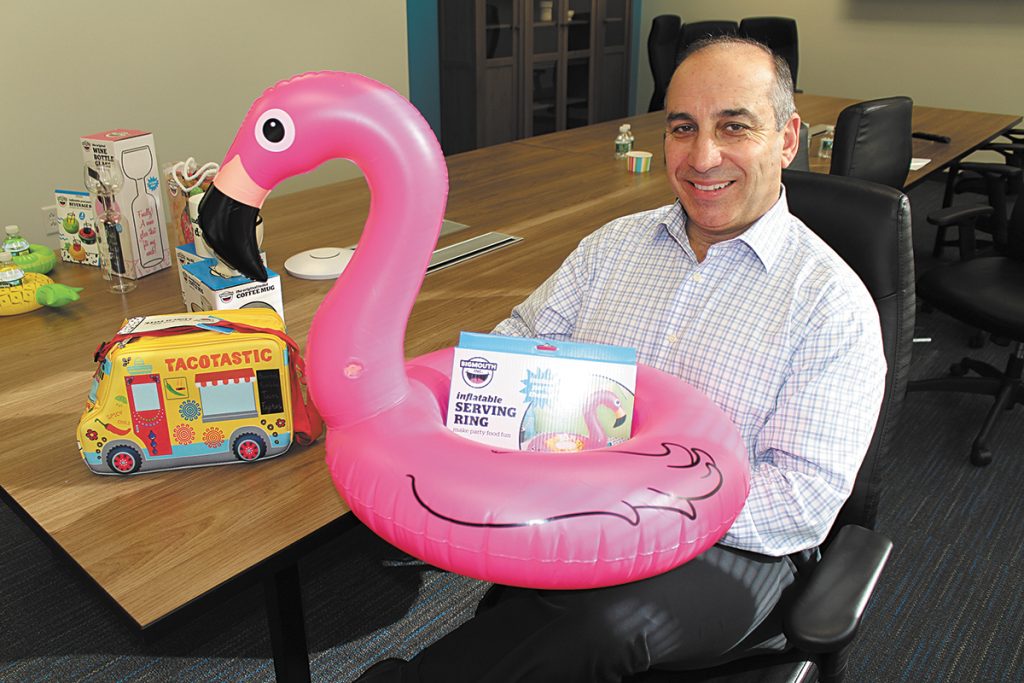 In 2017, then-CEO Frank Carpenito was upbeat about BigMouth’s products and its future. (Photo courtesy of the Hartford Business Journal)

Indianapolis-based investment firm CID Capital was brimming with optimism when it acquired Connecticut-based novelty products company BigMouth Inc. in November 2016 for an undisclosed sum. It said in a statement at the time that BigMouth was “still in the early pages of their success story.”

And in a 2017 interview with the Hartford Business Journal, BigMouth’s then-CEO said the company was aiming for $50 million in revenue that year, with annual revenue of $75 million to $100 million possible over the next few years.

The company defaulted on a debt payment April 1 and its board and CEO resigned a few weeks later. By the end of that month, a partner in the deal, Charlotte, North Carolina-based Capitala Private Advisors LLC, had filed suit against BigMouth, and a Marion County judge had put BigMouth under the control of a receiver who is now liquidating the company.

In a document included in the court filing, BigMouth cites various reasons for its financial troubles—including sharp sales declines caused by stay-at-home orders.

Observers, though, offer mixed opinions about how the COVID-19-related economic downturn might affect other private-equity-backed firms, whose financing typically includes a significant amount of debt. And they don’t foresee a wave of business failures, even in the consumer-products sector, which is vulnerable to economic fluctuations.

“This is a one-time event,” said Faraz Abbasi, senior partner at Indianapolis-based private equity firm Centerfield Capital Inc. “We feel, [in] the third and fourth quarter, things are going to start coming back.”

BigMouth, though, doesn’t appear to be headed for any comeback.

From the outside, it’s difficult to get a complete picture of where things went wrong.

CID Capital Managing Director Scot Swenberg, who was a member of BigMouth’s three-person board of directors until April 16, did not respond to multiple phone messages and e-mails.

BigMouth’s court-appointed receiver, Gregg Stewart of Jensen Beach, Florida-based Rinnovo Management LLC, declined to comment, as did attorneys for Capitala, the North Carolina firm that has sued BigMouth in Marion Superior Court. The docket in the case does not yet include information on who will serve as BigMouth’s legal counsel.

But according to court documents, BigMouth’s troubles began before COVID-19.

On Jan. 10 of this year, Covves and BigMouth reached a confidential settlement in which BigMouth agreed to pay Covves an undisclosed sum over the next two years.

When CID acquired BigMouth from its founder, Steve Wampold, in 2016, financing for the deal came from both Capitala and Tampa, Florida-based Cadence Bank. That financing included a $25 million term loan and a revolving credit commitment of $4 million.

By Jan. 30 of this year, that original credit agreement had been amended twice and Cadence Bank was no longer part of the deal.

BigMouth missed a debt payment April 1, putting the company in default under the terms of that agreement.

BigMouth appointed Stewart, of Rinnovo, chief restructuring officer on April 13 for purposes of liquidating the company.

In a document authorizing this action, the board wrote that BigMouth “has suffered significant setbacks and challenges including, among others: numerous customers canceled, delayed or significantly reduced orders for 2020 delivery; sharp decline in retailer sell-through of the company’s core products resulting from state mandated stay at home orders, and company lack of liquidity necessary for ongoing operations.”

The same day, Capitala asked the court to appoint Stewart as receiver. On April 25, the court did so.

Though BigMouth blamed a decline in retail sales for its woes, that does not mean all consumer-products companies or all private-equity-backed companies are suffering right now, Centerfield’s Abbasi said.

Centerfield’s investment portfolio currently includes 26 companies in various industries. About a third of those companies are struggling right now with 40% to 50% sales declines, Abbasi said. But another third are holding relatively steady and the rest are performing well.

Abbasi serves as chairman of the Small Business Investors Alliance, a private-equity industry group. Based on his conversations with other firms, they are also seeing similar results among their portfolio companies.

Food manufacturers and food distributors are generally doing well right now, Abbasi said, and companies that are considered essential businesses during the shutdown are mostly holding their own. Others are not faring so well, including a Centerfield-owned event rental business in North Carolina that has furloughed most of its employees.

“Facing COVID-19 fears in addition to already reduced expectations, PE fund managers appear to be headed for a difficult time. We believe they are likely to fare better than others might anticipate given the circumstances,” the report said.

The report also noted that private-equity-backed firms that are consumer-focused will likely be hardest hit because widespread layoffs, furloughs and economic uncertainty will depress consumer spending.

The effect on consumer products companies will depend on the price and type of objects they sell, Abbasi said. “Obviously, consumers have been hurt by high unemployment and [less] discretionary income.”

Moderately priced items will likely be hurt less, he said, and some items, especially at-home entertainment goods like board games or backyard game equipment, or things sold primarily online, are selling well.

Steve Jones, a professor of finance at Indiana University’s Kelley School of Business at IUPUI, also said he doesn’t expect private-equity-backed firms to struggle any more than other companies.

During the Great Recession, Jones said, deals were more heavily weighted toward debt, and “some of the firms really got themselves into trouble.”

As a result, he said, private equity deals today tend to rely less on debt, making the deals less risky if the company hits a rough patch.

Private-equity ownership also offers some advantages, Jones said—namely, that the companies can turn to their private-equity owners for guidance in tough times. “The model is actually a model that works fairly well in a crisis for that reason.”

At Centerfield, Abbasi said he and his colleagues are spending much more time communicating with their portfolio companies’ managers than usual. “We are on weekly calls right now. Three months ago, we used to do monthly calls.”

Centerfield’s portfolio companies are using a variety of approaches to weather the economic downturn, he said. Many have secured forgivable loans through the U.S. Small Business Administration’s Paycheck Protection Program. Companies are also instituting management pay cuts and negotiating with lenders.

“Anything the board can do to spruce up liquidity in these times is what the boards are focused on,” Abbasi said.

In some cases, Centerfield has invested additional equity in its portfolio companies, a strategy Abbasi predicts might become more widespread. “Equity infusion is going to get a lot more common down the road if the COVID-19 shutdown lasts a lot longer than it already has.”

Coming into the pandemic, private equity firms were generally flush with capital, so they have the ability to help their portfolio companies financially. The tough part, Abbasi said, is determining whether it makes sense to do so.

“There is liquidity [available] but the challenge is, do you want to put good money after bad?” Abbasi said. “It becomes a very difficult situation if you’re seeing a company go down. We can support it only to a certain extent.”•