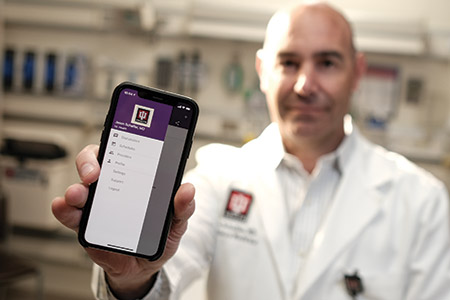 IU Health is transitioning from pagers to a system that allows doctors to send patients’ medical records back and forth on their smartphones. (IBJ photo/Eric Learned)

For more than half a century, doctors have stubbornly stuck by their pagers, even as other workers, from delivery drivers to nuclear-plant engineers, have given them up for more up-to-date communications devices.

Since the first pager was patented in 1949 and used in New York’s Jewish Hospital, millions of doctors have done their daily rounds in hospitals with the gadget clipped to their waistband, always ready to hear the beep that might signal a medical crisis on the other end.

They like the devices’ reliable, far-reaching reception—which can range hundreds of miles—and the weeks and weeks of battery life.

But now pagers are going the way of medicine tins, bleeder knives and other health care relics of bygone eras—mostly over concerns that private health information can be intercepted and compromised, putting patients and hospitals at risk.

Increasingly, hospitals across the country and in Indiana are turning to encrypted software that can be used on smartphones and other mobile gadgets, allowing doctors to communicate by text, voice or video. Some software can even tap into a patient’s electronic medical information, lab results, X-ray and other scan results, speeding up the process of sharing medical information, instead of paging and waiting for callbacks.

“Drug dealers and physicians are the last two groups to use pagers,” said Dr. Jason Schaffer, associate chief medical information officer at Indiana University Health. “And drug dealers moved off of them 10 to 15 years ago.”

Today, about 500 IU Health doctors across the state still use pagers—which are usually a one-way form of communication with the sender’s identity and urgency level unknown.

But the health system, with 16 hospitals and dozens of clinics and urgent care centers, says it is phasing out the use of pagers, with plans to take them away from all doctors by the end of the year.

By 2020, IU Health will also take pagers away from nurses, chaplains, social workers, janitors, patient-transportation workers and others.

The health system says it hasn’t noticed any problems with patient information being hacked or compromised. But they say tapping into pager frequencies is not difficult, and they want to avoid problems.

“We did have an eerie demonstration by our information security folks, where they demonstrated in real time just how many of these pagers they could look into,” said Dr. Seung Park, IU Health chief medical information officer.

“Combine that with the fact that we have noticed cases where patients have received targeted advertisements and targeted solicitations. It does make us wonder if somebody is listening in on those non-secure airwaves.”

Other health systems, from Community Health Network to Johnson Memorial, say they have sharply reduced or discontinued the use of pagers in the past year or two.

The U.S. pager market peaked at 45 million devices in the mid-1990s, but a few million pagers are still in use, mostly in health care, according to global research firm Frost & Sullivan. Analysts say about 80% of hospitals still use pagers, but that is changing quickly.

For decades, pagers transmitted basic information: just a 10-digit phone number the doctor could call to talk to an operator, a nurse or another doctor.

But more advanced pagers became able to relay short alpha-numeric messages, with specific patient information. If the senders weren’t careful, the information could be too detailed, identifying a patient and protected health information, such as diagnosis or lab results.

The huge technology switchover comes amid high-profile stories of unencrypted patient information—including a name, date of birth, diagnosis and treatment—getting exposed on open radio waves, in violation of federal privacy laws. In some cases, ham-radio users with a $20 antenna have picked up a pager’s signals.

That flies in the face of the nation’s strict laws on sharing sensitive health information without permission.

‘You have to be careful’

Central Indiana hospital systems that still use pagers say they try to be careful about what kind of information health workers can send over pagers, limiting it to general information.

Some health-privacy experts say they advise doctors and hospitals to avoid sending confidential health information through pagers, because it is so vulnerable.

“Any time you’re communicating protected health information, you have to be careful you’re using a secure means,” said Mark J. Swearingen, a health care attorney specializing in privacy issues for Hall Render Killian Heath & Lyman in Indianapolis. “There are more secure means to communicate than pagers.”

Yet, pagers have been popular for so long because they often work in places cell phones don’t—such as the far corners of hospital buildings, with dead zones for Wi-Fi and cellular signals.

Pagers operate on lower frequencies than cell phones, which allow for better reception in places with thick walls and underground areas, according to the Kansas City Star, which published an investigation last year into how hospitals have been exposing patient data every time they page one of their doctors.

The paper quoted an unknown information technology worker who stumbled across hospital pager information while playing with an antenna, which he bought to get TV channels on his laptop computer. The worker saw patient data from the University of Kansas Hospital, Children’s Mercy Hospital, and other medical centers as far away as Michigan and Kentucky.

The unencrypted data included information on hundreds of patient visits, some of them for such sensitive issues as drug overdoses, suicidal thoughts and alcohol withdrawal, the newspaper reported.

Central Indiana hospital systems that still use pagers are restricting the types of information they receive and are moving toward outright bans.

Eskenazi Health said it will phase out pagers by November and replace them with software called Epic Secure Chat, a system built into the health system’s electronic medical record system. The software is made by Epic Systems Corp., based in Madison, Wisconsin.

Franciscan Health says it has phased out pagers “except for a few of our critical on-call groups.” Instead, it is using a secure texting service from Vocera System, based in San Jose, California, which uses a voice-recognition system similar to voice assistants Siri and Alexa that nearly eliminates the need to touch the device.

Johnson Memorial Health said it began phasing out pagers two years ago in favor of the Lynxit, software doctors can access via a smartphone app, made by iWT Health, based in Henderson, Kentucky.

Still, it’s taking time to get everyone onto the new platform. “There are still four or five providers who haven’t finished the transition yet,” Johnson Memorial spokesman Jeff Dutton said.

Community Health Network said it started phasing out pagers early this year, going from 2,300 to 1,500, with a goal of fewer than 300 by the end of the year.

“With any technology, there is always the risk that communication can be compromised,” said Dan Blueher, Community Health Network’s manager of telephone operations. “Pagers are old technology and carry the most risk of being compromised.”

Community Health is turning to a smartphone app made by Boston-based Everbridge Inc., along with Vocera text-ing and voice communications software.

Several other health systems, including Hendricks Regional and Ascension St. Vincent, either declined to discuss their software or did not return messages to IBJ.

It is using software from Indianapolis-based Diagnotes Inc., which allows doctors to send patients’ medical records back and forth on their smartphones, and chat by secure text, voice or video. Diagnotes’ technology also allows hospital administrators and floor nurses to look at schedules and contact information for on-call specialists, allowing them to reach them in a hurry.

“When we began this project, our intent wasn’t just to replace pagers,” said Park of IU Health. “It was to give our clinicians something fundamentally better.”

Diagnotes, a privately held company with 15 employees, said it is seeing a growing acceptance by health systems of new types of communications technology.

“There’s no question that moving from older technology platforms to newer ones requires an understanding of the value that the newer technologies bring, and a desire to continuously improve the performance of their organization,” said Dave Wortman, co-founder and CEO of Diagnotes.

Many doctors readily admit the obsolescence of pagers. Dr. Mary McAteer, an Indianapolis pediatrician, said her first pager, presented to her as a resident in the 1980s, was as big as a transistor radio.

“I had to wear a white coat with large, reinforced pockets in order to keep track of it,” she said.

The pager emitted an “ear-piercing screech,” followed by an operator’s voice that relayed the number to call. If she missed the message, she couldn’t replay it. The following year, she traded in that pager for one with a vibrating function, but even that startled her.

“I usually forgot when I put it on silent, which vibrated so intensely I would shudder severely,” she said, “and cause my colleagues to laugh hysterically at me.”•