As a financial tool for individual charitable giving, the donor-advised fund has been around for decades.

But for a variety of reasons—economic factors, federal tax reforms and the pandemic among them—DAFs are gaining major traction right now.

Over the past several years, the number of DAFs in the United States, the amount contributed to these funds and the amount distributed to charity from them have all seen significant growth, with no signs of a slowdown.

Jim Macdonald, the Indianapolis-based Indiana and Kentucky market manager for J.P. Morgan Private Banking, said his clients are also taking notice. “The interest in this as a topic has definitely been on the upswing.”

Most donor-advised funds are affiliated with what’s called a national charity, which can be either an independent organization like the National Philanthropic Trust or a charitable organization affiliated with a financial institution like The Vanguard Group Inc., Fidelity Inc. or The Charles Schwab Corp. Of the 873,228 DAFs that existed in 2019, about 731,000 were administered by a national charity. 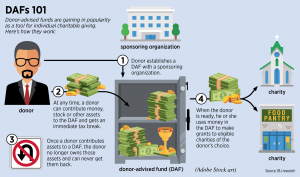 The remaining 59,000 were administered by a single-issue charity—a not-for-profit with a specific focus, such as a faith-based organization, a university or a cause like the environment or international relief.

Experts say donor-advised funds can be a good tool because individual donors can contribute to a fund and get a charitable tax break now, then take more time to decide where those donations should go. DAFs can also make giving easier and more convenient, and even shift a donor’s mindset and habits to encourage greater giving.

“It’s become a very, very popular tool because it’s so easy and so flexible,” said Rob MacPherson, vice president of development and strategy at the Central Indiana Coummunity Foundation.

CICF and its affiliates, the Indianapolis Foundation and the Hamilton County Community Foundation, administer a combined 458 DAFs between them. That number has been growing steadily, MacPherson said, at about 10% each year the past 20 years or so. “We have many more funds joining us than are closing.”

But these experts also say DAFs aren’t the ideal answer for every situation. Depending on whom you want to give to, it might make more sense to give directly.

Because the National Philanthropic Trust’s most recent report includes data only through 2019, it doesn’t reflect the effects of the pandemic. But by all accounts, COVID-19 has actually accelerated the interest in DAFs.

“We’re still busy. The trend is that it’s going to continue,” said Mary Jovanovich, senior manager of business development for Schwab Charitable. The organization is based in San Francisco, though Jovanovich is based in Indianapolis.

For the fiscal year that ended June 30, Jovanovich said, DAFs administered by Schwab Charitable distributed a total of $3.7 billion in grants—a new record, and up from $3.1 billion the previous year. The giving came from both new and existing DAFs.

Jovanovich said one reason DAFs have become particularly popular the last few years is the federal tax reforms of 2017, which lowered personal income tax rates in several tax brackets. The rate for the top income bracket fell from 39.6% to 37%. That spurred some people to make charitable donations before the rate changed, so they could lock in a larger tax break.

Making charitable donations through a DAF offers the same tax benefit as donating directly to a charity. But the DAF’s advantage, Jovanovich said, is the chance to lock in a tax break without the need to make that donation at once. “It allows you to spread out your donations but get the tax deduction in the year you need it the most.”

So, Jovanovich said, some donors now choose to contribute multiple years’ worth of charitable contributions to a DAF so they can hit the higher threshold and itemize their deductions for that year.

As a way to reduce capital gains taxes, Fulk said, a person might choose to donate appreciated shares of stock to charity. Typically, the stock is then sold and the cash goes to the charity.

DAFs are an ideal way to handle gifts of stock, he said, because those funds’ administrators have the expertise to handle donations that need to be converted to cash before a charity can accept them.

MacPherson, at CICF, said his organization once handled a charitable donation of grain from a farmer with a DAF account. It has also handled donations of real estate, retained life estates and shares of privately held businesses. “We can accept very complicated gifts. The Humane Society would not be able to process 50 shares of an LLC.”

Another potential factor encouraging the growth in DAFs: In some instances, the barrier to entry is getting lower.

In contrast, Cummings said, it typically takes “many millions of dollars” to establish a family foundation.

Some DAF administrators have a minimum requirement for establishing a fund, but others have dropped that requirement altogether.

While DAFs had already been growing in popularity, the zero-minimum phenomenon might be helping fuel that growth, said Una Osili, associate dean for research and international programs at the Indiana University Lilly Family School of Philanthropy.

Those in the field also cite the pandemic as contributing to the boom.

The economic disruption from COVID-19 created both great need and great interest in giving to meet those needs, Jovanovich said.

Those who can afford to give, she said, are increasingly focused on making big gifts during their lifetimes so they can see the results of those gifts. She cites the pandemic as a reason those attitudes are shifting. “In the past, it was always a given that you left all of your money to your family, and that’s not the case now.”

In that spirit, Jovanovich said, using a DAF can elevate the experience of giving. She has some clients who have given their DAFs names like the Give it all Away Fund or the Clever Girl Fund. “It does allow people to experience the joy of giving in a different sense.”

Much of the recent growth in DAFs has come from national charities such as those established by Charles Schwab, Vanguard and Fidelity.

Part of that is likely the convenience factor—someone who already has money at one of these big firms can easily move some of that money into a DAF administered by the firm’s charitable counterpart.

According to the National Philanthropic Trust report, the number of DAFs grew 220% from 2015 to 2019. The subset of DAFs administered by national charities grew 371%, while the subset administered by community foundations grew only 21%.

That said, there are good reasons a donor might want to establish a DAF at a community foundation rather than a national charity.

A donor might want to support local hunger initiatives, for instance, but not know much about specific local groups. Community foundations can help a donor think through that process.

“We really understand the philanthropic landscape in our respective communities,” said William Rhodehamel, president and CEO of the Hendricks County Community Foundation in Avon. “We can work with [donors] to help them refine what their goals are, to really create the impact they want.”

The Hendricks County Community Foundation administers 28 DAFs with a combined $6.95 million in assets.

MacPherson, at CICF, agreed. “We don’t just have 458 [DAF] clients. We have 458 true philanthropic partners.”

Fulk, at Valeo, said if his clients want their charitable contributions to stay local, or if they need guidance about where to give, those clients might be better off with a DAF at a community foundation.

Greenfield said some of her clients have DAFs both at Vanguard Charitable and at a community foundation.

“Community foundations do phenomenal work in their communities,” she said. “We all have similar missions, to increase philanthropy, but we do it differently.”

Despite their numerous advantages, proponents say, DAFs are not always the best choice.

So, Jovanovich said, donors don’t need to set up a DAF if they want to give now to a specific charity. “It’s silly to pay the fees. Give more money to charity.”

DAFs also carry restrictions on where money can go. Once donors contribute to a DAF, the money is no longer theirs and they can’t get it back. Donations must go to a charitable cause and cannot go to individuals.

A donor, for instance, can’t use a DAF to give a college scholarship to a particular student, Greenfield said. “There’s certain situations where it’s just not the right tool.”•