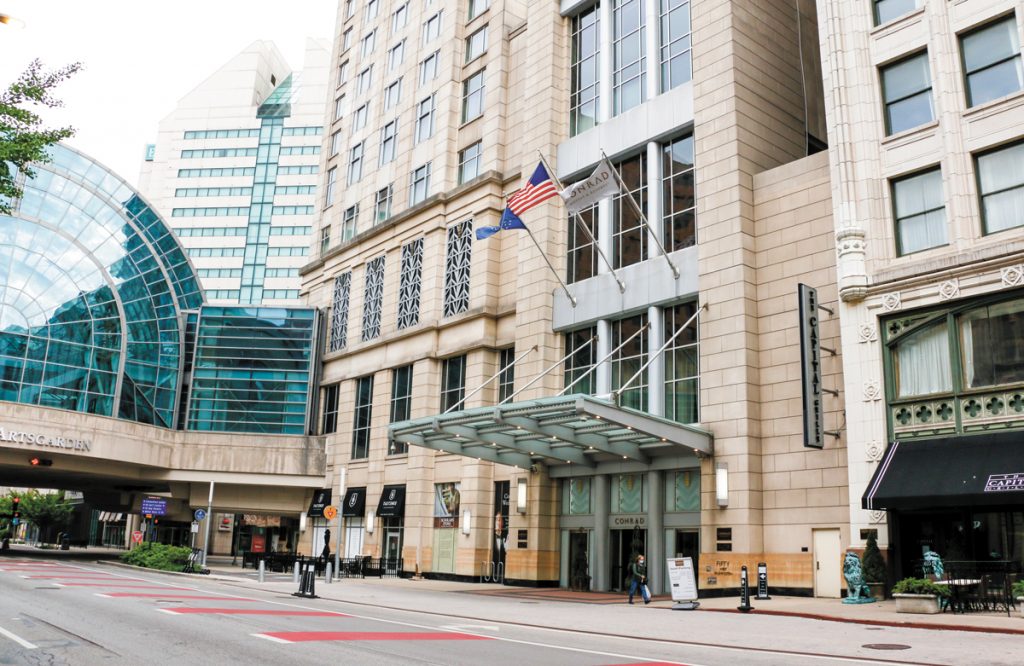 Many Indianapolis hotels could face delinquency or default on their mortgages in the years ahead, as they cope with severe strain from the coronavirus pandemic’s wreckage of the hospitality industry.

Most hotels in the Indianapolis area have occupancy rates below 20%, with downtown rates hovering around 7% and room prices cut by half since mid-March.

And with the summer convention lineup falling by the wayside or in doubt, those figures likely will stay in the cellar for months.

“Nobody’s economics are set up to operate at [these] levels,” said Dave Keller, a hotel financing expert with the Indianapolis office of Chicago firm JLL. “Every hotel is under enormous stress, so the question really becomes which owners have the financial wherewithal, credibility and respect to … help them weather this storm.”

IBJ reviewed records for 34 central Indiana hotels with loans in the form of commercial mortgage-backed securities, or CMBS—a financing method used by about 30% of U.S. hotels—based on public data as of April 30 from research firm Trepp LLC.

The analysis found at least 20 CMBS hotels are at risk of missing debt payments if the rest of 2020 does not bring marked improvements.

In CMBS lingo, a debt service coverage of ratio of 1 means a hotel’s net cash flow for the year exactly matches its debt service, not counting reserves or revenue already earned.

IBJ identified hotels at risk by slashing the debt service ratio for each hotel in half, which equates to the loss of 50% of its net cash flow for a full year. IBJ deemed a hotel at risk if that calculation pushed the debt-service coverage ratio below 1 or if it already was late on debt payments as of April 30.

The examination (which did not take into account hotel cash reserves, as they are not public record) found the area’s vulnerable CMBS properties include some of its most prominent—among them Conrad Indianapolis, Embassy Suites Downtown and Hyatt Regency.

The three hotels, which collectively carry $146 million in debt, are among eight downtown properties to have their coverage ratios fall below 1 under a cash flow “stress test.”

Eleven other CMBS hotels in central Indiana also saw their coverage drop below that mark under the test.

Already, six CMBS-backed hotels are late on their debt payments as of the end of April—each by fewer than 30 days, meaning they’re not yet delinquent.

In fact, JLL’s Keller said he expects “virtually every hotel loan in the country will be unable to make its debt service payments for April, May, or as long as this [situation] lasts.”

A CMBS is created by taking a group of loans, bundling them together, then selling them to investors as a series of bonds.

CMBS loans are attractive for hoteliers because they typically offer more favorable terms and larger loan sizes than do banks and other traditional lenders.

But experts say that, when borrowers struggle to make payments, CMBS loans can be trickier to navigate—in part because the workout process is more rigid than if the borrower were working with a single lender.

Even so, struggling CMBS borrowers sometimes can muddle along for years without losing their properties through foreclosure.

For example, in the financial collapse of 2008, the peak in hotel CMBS defaults did not hit until 2011, according to Moody’s, a credit rating agency.

Mark Owens, head of hospitality capital markets for Los Angeles-based CBRE, said hotels that fail to maintain a 1 debt-service coverage ratio struggle “because they don’t have enough money to pay debt service from ongoing operations,” and the nationwide shutdown of most non-essential travel has amplified those problems.

Many lenders establish cash traps on CMBS loans. The traps capture surplus cash flow in an auxiliary account if a hotel’s debt coverage ratio falls below a certain level and debt payments can’t be properly serviced.

Some experts say they see hope in the Indianapolis area’s CMBS data.

Doug McCoy, the Al and Shary Oak Director of Real Estate at Indiana University, analyzed the Trepp data and concluded that more than one-third of the 34 hotels might have substantial cash reserves.

That’s based on the assumption that the healthy debt service coverage ratios that hotels were able to maintain pre-COVID-19 allowed them to sock away extra cash.

“Of course, during the crisis, that [cushion] is going to go away,” he said. “But I think it speaks to their capitalization, their reserves, access to liquidity and good management.”

McCoy noted that 14 properties were at 2 or higher, meaning their annual net cash flow was at least twice their debt payment. Another 11 hotels had ratios of 1.5 to 1.9.

“When I see some of these good debt coverages on a normal operating basis … I’m seeing that these folks are good operators that have probably planned well with reserves and access to liquidity,” he said. “So, I would argue that it seems we have some good stability in the Indianapolis hotel market.”

As of April 30, only two Indianapolis CMBS-backed hotels—the Holiday Inn Express & Suites East off Shadeland Avenue and the Suburban Extended Stay Northeast near East 82nd Street and Interstate 69—were already below the 1.

The largest CMBS hotel borrower in central Indiana is the JW Marriott and Fairfield Inn & Suites, with a loan balance topping $122 million.

The JW Marriott/Fairfield is the largest hotel complex in the state, with 1,173 rooms. It also boasts central Indiana’s best debt service coverage ratio—4.18.

Owens does not fault hotels for temporarily closing. In fact, he said, it’s likely part of a strategy to ensure they don’t take on additional debt.

“In some cases, it may be advantageous to shut down because you’re having to write [more] checks on top of the debt service amount that is required,” he said, referring to payroll, utilities and other expenses.

Generally, the only recourse available to struggling CMBS hotels is through special servicing, which allows owners to negotiate for payment deferrals or forbearance to avoid defaulting or becoming delinquent with their payments.

But it doesn’t come easily.

CMBS-backed hotels generally struggle to secure those forms of financial support—commonplace with traditional mortgages—because the loans use a servicer, or middleman, to stage negotiations. It is rare that the borrower interacts directly with investors holding the bonds.

The Hyatt Regency entered special servicing in late March for its $65 million loan balance; it’s currently the only local CMBS hotel with that designation. The hotel’s owner, Louisville-based Columbia-Sussex, did not return a call from IBJ seeking comment.

Hotelier Jim Dora Jr.—whose company owns the Crowne Plazas downtown and at the airport, among other hotels—said he’s begun negotiations for special servicing of some of his properties but declined to be specific.

He said it’s challenging for CMBS-backed hoteliers to start relief conversations—and it’s additionally difficult now that thousands of other hoteliers are all seeking similar aid.

“The CMBS market is specifically much more difficult than a typical lending situation, because it is more difficult to negotiate a forbearance agreement,” said Dora, CEO of Indianapolis-based General Hotels Corp. “You don’t have the flexibility” available with other loans.

“Each property owner is going to have to figure out how they manage through this time,” he said. “But I think common sense would [suggest] that, with no consumer demand, no guests and no demand generators, other hotels will follow” the Hyatt’s lead.

Hoteliers and hospitality industry experts told IBJ the financial problems from COVID-19 already far exceed those fueled by 9/11 and the collapse of 2008.

Mike Wells, president of REI Investments, said hotel operators generally had more equity in their properties going into the COVID-19 crisis than they did going into the 2008 crisis.

Even so, “not being open or being open at 8% or 10% occupancy is a pretty bitter pill for any hotelier to swallow,” said Wells, whose company co-owns the temporarily shuttered Indianapolis Marriott Downtown. “And if it continues for a long period of time, that makes it even harder.”

Dora said this is the most challenging time he’s experienced in his more than three decades in the hotel industry.

“This is an economic situation that is as bad as it could possibly be, especially within the service industry,” he said. “A hotel needs to have a certain amount of occupancy to be profitable. We’re not even close to those occupancies right now.”

General Hotels has furloughed or laid off most of its 1,400 employees. It’s also imposed what Dora called “extreme cost controls” and ramped up efforts to bring in contract business.

This includes making use of the airport Crowne Plaza—which has an $8.9 million CMBS loan—as an Indiana State Department of Health overflow site for COVID-19 patients.

“If this is a ‘stress test,’ then I’d hate to see what the real test is going to be,” Dora said. “We’re counting every penny. The goal is that we get to the day that business starts to pick up.”

Tamm, the lobbyist, said it will take two to five years for the local hotel market to fully recover.

A bustling convention industry will be key to that revival, though that’s not on the horizon yet.

Organizations have canceled their Indianapolis conventions into early July, and events later in the year—such as Indy PopCon, FDIC International and the the National FFA—likely will see much smaller crowds than usual, if they move forward at all.

“If we’re unable to get large groups and conventions going again,” Tamm said, “those hotels that really cater to those markets will continue to be closed.”•