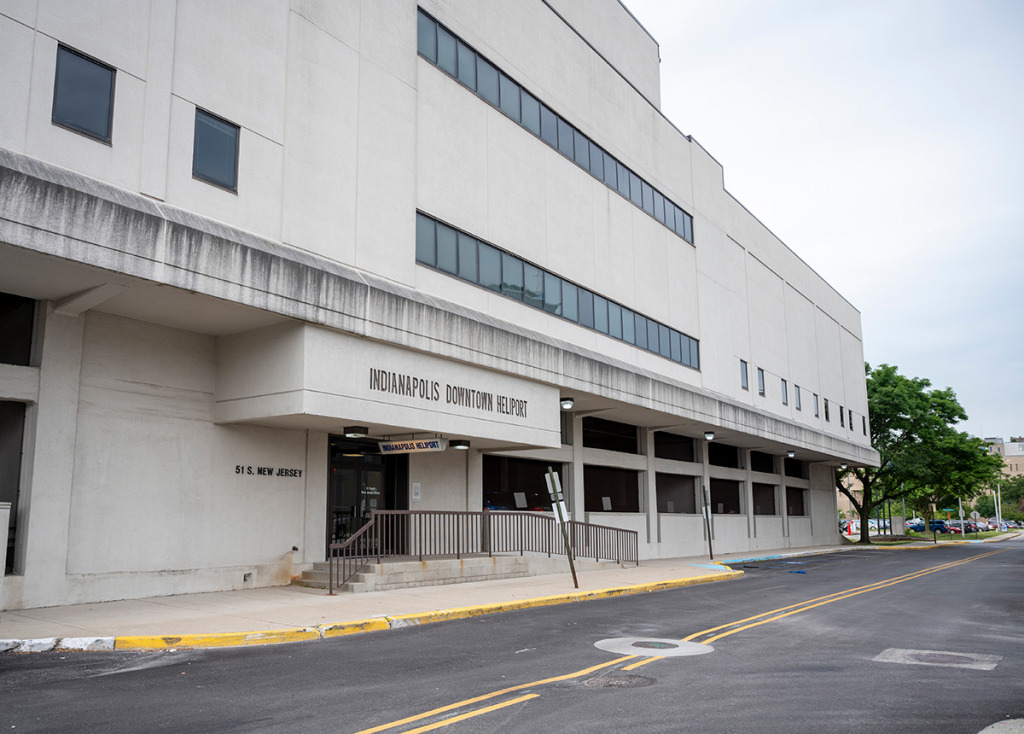 The Indianapolis Airport Authority plans to sell off the Downtown Heliport and make room for new development. (IBJ photo/Mickey Shuey)

The Indianapolis Downtown Heliport isn’t likely to cease operation until early 2023 as its owner continues working with Indiana University Health to finalize plans for the health network’s LifeLine operations.

The Indianapolis Airport Authority said it hopes to receive tentative approval to decommission the facility at 51 S. New Jersey St. by the end of February. It is working with the Federal Aviation Administration to secure the designation, which is crucial for future redevelopment of the site.

The city and airport authority last year confirmed to IBJ their plans to make the facility available for redevelopment proposals that could include multifamily, retail or commercial uses.

“The IAA is currently in process of responding to the FAA’s technical questions as part of securing the agency’s approval for this transition,” the authority said in a statement this week. “Overall, we are committed to the spirit and terms of a memorandum of understanding executed with the city’s Department of Metropolitan Development in July of 2021 that will result in revitalization of the area surrounding the heliport.”

In October, officials from each agency separately said they expected to complete the decommissioning process by the end of 2022. But the move been delayed as work continues to secure a new home for the LifeLine’s operations, which is currently the heliport’s only tenant.

“IU Health LifeLine is in close communication with the Indianapolis Airport Authority on the relocation plan of our downtown operations, which are expected to be finalized soon,” IU Health said in a statement.

The property cannot be marketed, put out for bid or sold until it is decommissioned for aviation uses. Once that happens, the city and airport authority can put out a formal request for proposals on the property to start the redevelopment process.

The agreement between the city and authority calls for the airport and the city to collaborate on a sale of the property, either to the city directly or to a third party. In either case, the buyer will be required to pay fair market value for the property.

The heliport, which opened in 1969 as Beeline Heliport, occupies 4.9 acres extending west to east from New Jersey Street to East Street, with Pearl Street to the north and an active set of railroad tracks to the south. It is surrounded by a 5.3-acre parking lot, a few smaller surface lots and a Best Western Plus hotel, all of which have separate owners.

It’s also near other sites that are prime for redevelopment, including the Marion County Jail that sits just a few blocks west, and the 10-story building at 603 E. Washington St., which recently sold to Sweet Real Estate for inclusion in an undisclosed project. Tenants in that building are expected to vacate the property by late 2023.

City officials confirmed that a future heliport district could still include an aviation component, but haven’t offered specifics. Such an element would require further approval by the FAA.