Home » Judge dismisses much of Larry Dixon’s suit against NHRA 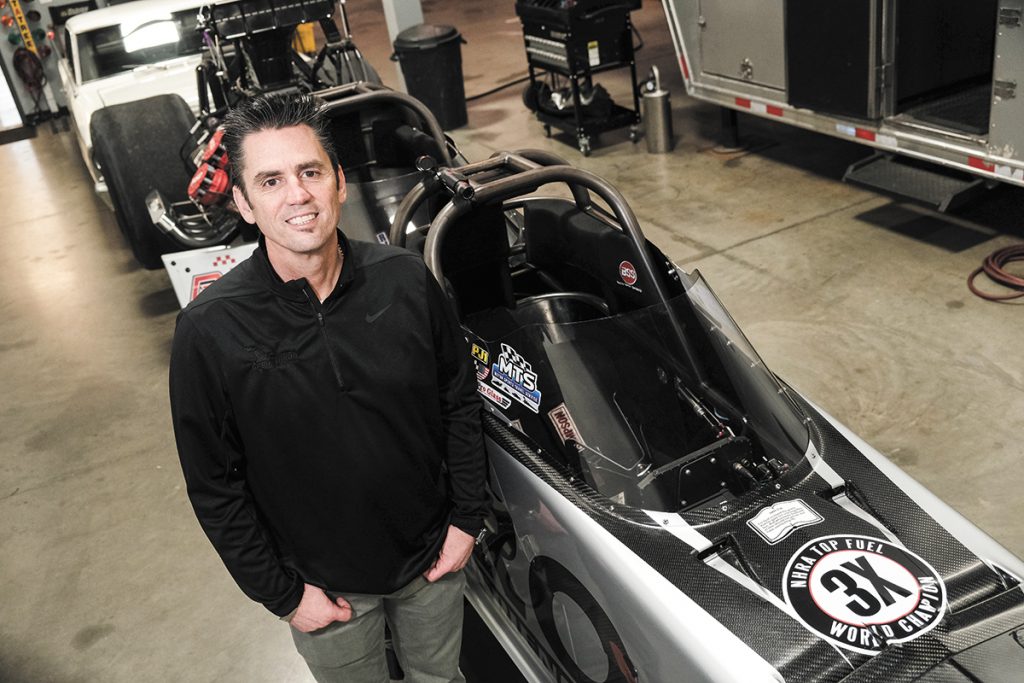 A U.S. district judge has largely sided with the National Hot Rod Association in its fight with three-time champion drag racer Larry Dixon, dismissing most of the claims in Dixon’s antitrust lawsuit against the California-based group.

Dixon’s attorney declined to comment specifically on the ruling but said Dixon has not given up his fight.

He already has filed a motion asking the court to reinstate claims that the NHRA defamed him, violated his due process rights, committed trade libel and breached its own contract.

The NHRA did not respond to requests for comment, but the association has previously said it does not comment on pending litigation. Its attorneys have filed a response opposing Dixon’s request for reconsideration.

Sweeney’s ruling comes a year after Dixon, who lives in Avon, brought the federal lawsuit against the NHRA.

At the center of the dispute is Dixon’s private development and exhibition of a two-seater dragster car, which gave paying fans the ability to partake in the thrilling speeds of drag racing as a passenger.

In 2017, Dixon rolled out the two-seater to capitalize on the growing fan-experience market as drag racing enjoys a resurgence in popularity. The dragster went on display at a Las Vegas trade show with an expired NHRA safety sticker attached to it, which an NHRA representative in attendance spotted. 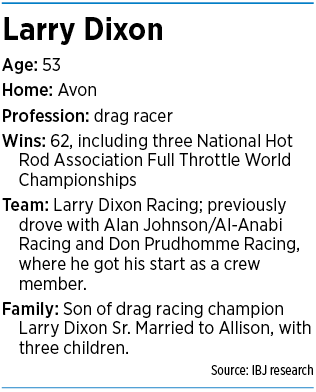 A few days later, Dixon was indefinitely suspended from participating in NHRA events in a “statement of action against participant” that stated the tag on display incorrectly implied NHRA approved of the car.

Dixon appealed the decision. When that didn’t work, he filed suit—on April 11, 2019, in the U.S. District Court for Southern Indiana.

The NHRA then asked the court to dismiss the claims, which Sweeney largely did—tossing the defamation, due process, trade libel and contract claims.

But the judge gave Dixon—who did not respond to online requests from IBJ for comment—30 days to amend other parts of his complaint.

One of his lawyers, Monica Cooper, a senior attorney at Texas-based Lanier Law Firm, declined to comment on the ruling but told IBJ: “We will continue to vigorously pursue the case.”

Dixon’s original complaint states his dragster was blacklisted from more than 140 NHRA-member racetracks and that the NHRA has deprived him of his livelihood. He hasn’t participated in an NHRA event since the suspension, which was lifted in July 2018 though the association continued to ban the dragster from all its member tracks and events.

His suit also accused the NHRA of making numerous misrepresentations to Dixon knowing they were untrue and of coercing him to stop promoting his two-seater dragster in exchange for reinstatement in the organization.

Dixon, an Indiana drag-racing legend and the son of Larry Dixon Sr., who raced in the 1960s and 1970s, got his start as a crew member for another legend, Don Prudhomme. He eventually took over as driver for the team when Prudhomme retired in 1994.

He raced for that team for 15 years before driving for Alan Johnson/Al-Anabi Racing. Then he formed his own team, Larry Dixon Racing, which is based in Brownsburg.

Sweeney’s 39-page order was filed March 30 in response to the NHRA’s motion to dismiss the entire lawsuit.

The NHRA argued that, in its contract with Dixon, he agreed to release the organization from all claims related to its disciplinary decisions and that its rulebook includes a covenant not to sue.

Sweeney agreed to dismiss the due process, breach of contract and misrepresentation claims. The court found that the NHRA abided by its own rules and that its procedures “comport with due process.”

Dixon and his team had also argued that the NHRA defamed him by “intentionally and recklessly” publishing statements about the safety and insurability of the dragster that “were designed to impugn Dixon’s character and to decimate the profitability” of the dragster.

In his order, Sweeney said Dixon had not given the court sufficient guidance on what claim he was pursuing—defamation, libel or both—and under what law—Indiana or California—he made the claim.

As such, he granted the motion to dismiss the defamation and libel claims. He also dismissed a coercion claim, saying Dixon failed to provide the court with the relevant law for making the claim.

While several claims in Dixon’s lawsuit have been dismissed for good, others were dismissed without prejudice, meaning they can continue to be litigated.

While the NHRA’s motion to dismiss claims of trespass, economic duress and antitrust was granted, the judge has given Dixon and his legal team 30 days to amend their original complaint to further show cause for those claims. That amendment is due to the court by April 29.

Dixon claims the NHRA interfered with his property rights by trespassing into the cockpit of his dragster and removing the NHRA sticker during that 2017 trade show, which was not hosted by the NHRA. In order to prove trespass, Dixon needed to show that the NHRA “dispossessed” him of the car, impaired its condition or value, or deprived him of use of the car for a substantial amount of time. In his complaint and subsequent responses, Dixon proved none of that, Sweeney wrote.

Dixon also claimed the NHRA threatened him with his career if he “did not bend to the NHRA’s whim and refrain from promoting, marketing and operating the two-seat dragster anywhere in the world,” causing him economic duress.

But the NHRA argued that Dixon could participate in NHRA events while still promoting his dragster. He just can’t promote his dragster at NHRA-sponsored events or tracks.

The judge found the NHRA “merely required” Dixon to comply to its rulebook.

“This is not a wrongful act, and the court need not even reach the other elements of the claim. Plaintiffs have not sufficiently [pleaded] a claim for economic duress,” Sweeney wrote.

Only one claim—conversion—survived the motion to dismiss. Dixon argued the NHRA committed conversion by wrongfully taking the safety sticker from the dragster during the trade show without permission and that he suffered damages as a result.

Because the sticker was expired and the dragster was on display at a non-NHRA event, Dixon argued, the sticker belonged to him.

The judge wrote that it remains unclear whom the sticker actually belongs to and that the question would better be addressed later in proceedings. He denied the NHRA’s request to dismiss that claim.

Because the conversion claim was not dismissed, Dixon’s tortious interference claim also survives.

That claim argues the NHRA intentionally damaged Dixon’s relationships with other businesses and parties, which caused him economic harm.

The organization did so by “strategically” visiting Dixon’s two-seat dragster at the trade show “in an effort to undermine and derail” his efforts to promote and market the car, the claims says.•