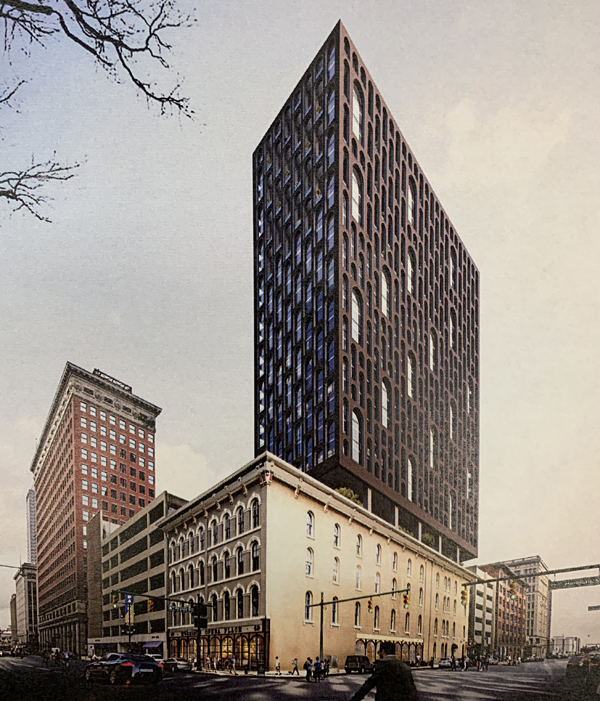 The owner of the historic Morrison Opera Place building in downtown Indianapolis is proposing a towering $60 million, 22-story addition that would be used for hotel and residential uses.

Bruce Bodner—who has owned the 149-year-old building at 47 S. Meridian St. since 1997—told IBJ he would like the development to be one of the “most unique, cool projects in Indianapolis.” The addition would boost the building from four to 26 stories.

Plans for the building, which housed a Hard Rock Cafe for 20 years until the restaurant’s closure this year, call for an addition that contains a 220-room “lifestyle” hotel and 32 residential units. The original building would be used for a signature restaurant and a terrace bar.

A hotel brand has not yet been determined, nor has the mix of residential units. Bodner said he expects there to be condominiums and market-rate and workforce-rate apartments.

Much of the building has been vacant for several years, with Hard Rock Cafe anchoring the ground-floor corner space at Meridian and Maryland streets from 1999 until its lease expired in March.

Plans call for a horizontal gap of 27 feet between the top of the existing 43,777-square-foot building and the bottom floor of the addition. That area would be used for a pool and other amenities for hotel guests and residents. The hotel would be occupy floors six through 17 and the residential units would be on floors 18 through 26.

The first floor of the opera house would be used as a restaurant, the second floor as the hotel lobby, the third floor for meeting space and back-of-house operations, and the fourth floor for additional commercial space, including a bar area.

Before the project can move forward, it must receive approval from the Indianapolis Historic Preservation Commission because it is in the historic Wholesale District.

The IHPC plans to hold a preliminary hearing for the development on Oct. 17. That meeting is intended to give the commission an opportunity offer feedback on the design, rather than to cast a vote.

Bodner, who so far is the only investor in the project, said he plans to seek incentives from the city in the form of tax-increment financing.

He said he expects to receive pushback from some members of the commission who could have concerns with the project’s design, but said he believes the proposal is a “great way to preserve” the building.

He said he views his project in the same vein as the $66 million mixed-use project at 421 N. Pennsylvania St., which earlier this month received approval for $9.8 million in TIF financing from City-County Council—amid criticism from some councilors.

While Bodner declined to say whether his project would be feasible without incentives, he noted “I clearly see a path forward if TIF is available.”

He said he believes the building, which is underutilized, is “uniquely positioned for an expansion,” particularly when compared to other historic downtown properties.

Bodner said is confident the market would be able to absorb the hotel rooms he is proposing.

Several other downtown hotels also are in the works or have been proposed, including the Tru by Hilton near Lucas Oil Stadium; a Kimpton Hotel at 1 North Pennsylvania St.; an Avid hotel at 324 Wilkins St.; an Even Hotel at 808 S. Meridian; an unnamed hotel in the King Cole Building near Monument Circle; and the long-lingering Drury project in the former IBJ building along East Washington Street.

Those are in addition to the two Hilton-branded hotels proposed for Pan Am Plaza.

Bodner was prolific local developer in the 1990s who owned CVS stories throughout Indiana before going through a Chapter 11 bankruptcy in 2011 due to the failure of a 62-acre mixed-use project in Avondale, Arizona.

The Opera Place building, which was built around 1870, has rich historical character, both on its interior and exterior. It was added to the National Register of Historic Places in 1979.

On the outside, the four-story building boasts arched windows on its upper floors and an Italianate-style cornice at the roof. Its interior is marked by a brick facade; exposed wood beams and trusses; cast iron columns and more. According its National Register application, the Italianate design that the building’s exterior typifies “was popular for commercial buildings in this area of Indianapolis from the period just before the Civil War to about 1880.”

According to public records, the building was constructed by Indianapolis businessman William H. Morrison after a fire destroyed the Morrison Opera Block on Jan. 17, 1870. Its second owner was M. O’Connor & Co. Wholesale Grocers, which occupied it from 1886 until 1924. From then until 1977, the Colonial Furniture Co. and its successor People’s Outfitting Co. occupied it.