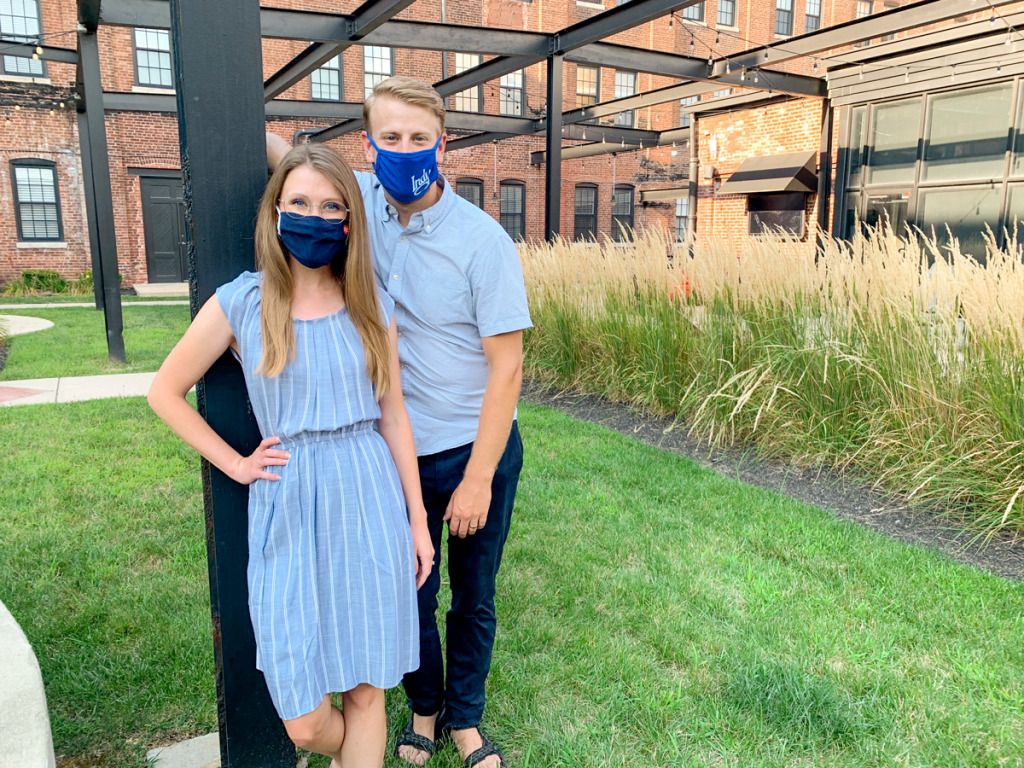 The only outdoor space Katie and Joshua Cline have at their Harding Street Lofts apartment is a shared courtyard. The pandemic has made them want space for a yard and garden. (IBJ photo/Lesley Weidenbener)

The pandemic has thrown millions out of work and deflated entire industries. But not the residential real estate market. A year ago, it was humming. Today, in the teeth of the pandemic, it’s roaring.

“Honestly, I have not been affected at all by COVID,” said Jennil Salazar-Scott, associate broker for Re/Max Ability Plus.

“Post-COVID [after Indiana relaxed restrictions on businesses], I’ve been busier. We have not seen this kind of market before, where we have multiple offers on properties that would not have sold as quickly before.”

Credit this feeding frenzy over new listings to bargain-basement mortgage rates, a relative shortage of new prospects (because some potential sellers don’t want strangers traipsing through their homes in the midst of a plague), and pent-up demand.

Some buyers need housing for a brand-new reason. After spending months in virtual lockdown, they’ve learned their residences just don’t serve their needs. Or more accurately, the needs of a family in quarantine.

“Early on, some of our members joked that everybody’s going to know what’s wrong with their houses now, because they’re stuck inside them,” said Karl Berron, CEO of the Indiana Association of Realtors. “There’s a lot of folks who are experiencing their homes in new ways, and reexamining what housing means to them right now.”

The combination of pandemic woes and record low rates means sales are on the rise, despite low inventory.

“We started out the year ahead of last year’s pace, had a big dip in the early days of the pandemic, and now we’re actually above last year’s pace again,” Berron said. “If you would have told me in mid-March that we’d see this kind of rebound, I probably wouldn’t have believed it.”

“There is still very healthy housing demand, and inventory turns over quickly enough that buyers who aren’t seeing what they want on the market right now are watching for new listings very closely,” said Chris Dykes, managing broker at Carpenter Realtors. “The moment a new home comes on the market, they contact their broker.”

Architects and real estate agents have already seen substantial pandemic-inspired changes, from a new distaste for open floor plans to a sudden resurgence in demand for swimming pools.

Perhaps one of the biggest is in what buyers consider to be a favorable location.

“There’s been a little bit of a change in the sorts of areas people are wanting to move to and leave,” Berron said. “Search activity in rural and small towns has been stronger, and has struggled a little bit in urban areas.”

Amanda Pendleton, home trends expert for the online real estate marketplace Zillow, says this trend is breaking huge in places like New York City and San Francisco, and to a lesser degree in secondary markets. The reasons are fairly obvious.

“Ideally, a great location is close to amenities like restaurants and shops,” Pendleton said. “It’s in the center of everything. But now that those amenities are no longer available, at least in the near term, they’re becoming less desirable.

That’s one of the reasons Katie and Joshua Cline, who married nearly one year ago, have changed their search criteria for a house. They’ve lived for three years in an apartment at Harding Street Lofts, just west of downtown. When they started looking to buy, they wanted to stay downtown, close to shops and restaurants and most of the things they like to do.

That was before the pandemic closed all their favorite places.

“It took about two months for us to go crazy and really crave an outdoor setting that we don’t really have here—and that we can’t afford to have if we buy downtown,” Joshua said.

The Clines started shifting their activities outdoors. They bought kayaks. They are spending a lot of time on the water.

And their housing interests changed, too. Now, they’re looking for something a little farther out of the city core, where they can have more yard, store their outdoor equipment and get to the water more quickly.

“We want to grow food. We’re talking about having a large garden, maybe a small farm,” Katie said. “That’s a thought that developed during COVID.”

Architects are also seeing a huge boom in demand for home-based amenities.

“People are realizing that they don’t need to be running around all the time, and that staying home is pretty comfortable,” said Mark Demerly, president of Demerly Architects. “And with low interest rates, it’s a great time to refinance and put money back into your house.”

One of the biggest architectural losers might be the open floor plan, in which the first floor is basically one partition-free mix of kitchen, dining and living spaces.

That’s a workable arrangement when you, your spouse and your kids take off for work and school every morning at 8 a.m., reconvene at about 6 p.m. and go to bed a few hours later. But as numerous families have already discovered, it’s much more problematic when you’re trapped together for weeks on end. A few more walls could provide a welcome shot of privacy—and soundproofing.

“Homebuilders predict that open-concept floor plans are going to be a thing of the past as people come to value more walls, more doors and privacy in general,” Pendleton said. “It’s really tough to make a phone call or have a Zoom meeting when your teenage son is clipping his toenails right behind you.”

Homeowners are looking at their abodes with new eyes, said Clete Kunce, principal and founder of the architectural design firm One 10 Studio. They’re desperately searching for dead or under-used spaces to carve out an office—or just someplace to get away. That can include everything from garages to attics to particularly spacious walk-in closets.

“We’ve been getting calls from people who are trying to figure out how to add an ‘away’ space,” Kunce said. “Not necessarily a dedicated office, but somewhere they can go.”

For obvious reasons, a fully functional home office [or offices] sits highest on most buyers’ and remodelers’ wish lists. It also might be the COVID-inspired trend with the most legs, given that companies now seem more interested in allowing their staffs to work from home post-pandemic.

In that case, making do with a corner of the guest bedroom or the space in the basement next to the water heater is no longer tenable.

“Right now, people are just doing makeshift things,” Kunce said. “Last week, somebody told me he was sitting on the edge of the bed in his bedroom, because that’s the only place he has to go. The kids are at the kitchen table and his wife has one of the other bedrooms.”

Close on the heels of home offices is a new interest in home workout areas.

“There’s more emphasis on a dedicated place to work out, since public gyms can be dangerous,” said Jason Shelley, executive director of the American Institute of Architects Indiana.

Another indoor space that’s getting more attention is the kitchen—even though this is traditionally one of the most expensive home improvements, with the least payoff when the house sells. But these days, with more people making more meals at home, that equation has changed.

“That’s a trend we’re going to start to see down the road,” Pendleton said. “If everything in the home is working except the kitchen, you’ll see people addressing that. They’ll do whatever they have to do to get their home optimized for the new normal.”

Technology is the other big indoor upgrade. More bandwidth for movie streaming and videoconferences and more gigantic TVs to stare at. But while that old staple from the ’80s, home theaters, doesn’t seem poised for a comeback, home-wide sound systems are drawing interest.

“That’s kind of coming back, because, even if you’re working from home, you want a little music in the background,” Kunce said. “Maybe they’re used to that from their days at the office.”

The pandemic has also changed how people perceive their yards—not as something to mow, but as a substitute for public parks and pools. Which is why elaborate, tricked-out porches, decks and patios are big, as well as more elaborate landscaping.

The pandemic has midwifed an explosion of interest in one of the most problematic of all outdoor improvements—the home pool. The dig against them is that they cost a fortune to install, require lots of man hours to maintain, and add no value. Indeed, in pre-pandemic days, they could actually detract from a home’s price.

“It’s great in the summer, but on the 12th of January when you’re looking at that ugly, leaf-covered pool cover, it’s not all that great,” Kunce said.

But even a high-maintenance outdoor amenity can sound like a bargain these days. Either that or a hot tub, which is also in huge demand just now.

“I was talking to one of our sponsors the other day, who works with hot tub salespeople,” Shelley said. “The say they can’t keep inventory in stock.”

The current boom in residential real estate sales and improvements might not have legs, however. All these pandemic-related improvements could fade in importance if life returns to normal, or something approximating normal, in the coming year. Or a long-term recession triggered by the economic shutdown could crush the market for new homes and home improvements.

On the other end of the scale, we might see an even hotter market as people who’ve bunkered down during the last few months decide to make long-deferred changes to their living arrangements.

“Maybe they’re not ready to make a move right now,” Pendleton said. “They’re waiting to see what happens and how this shakes out and where they’re going to be working next year.” But “ when it’s time to move, I think they’re going to have a different set of preferences.”•