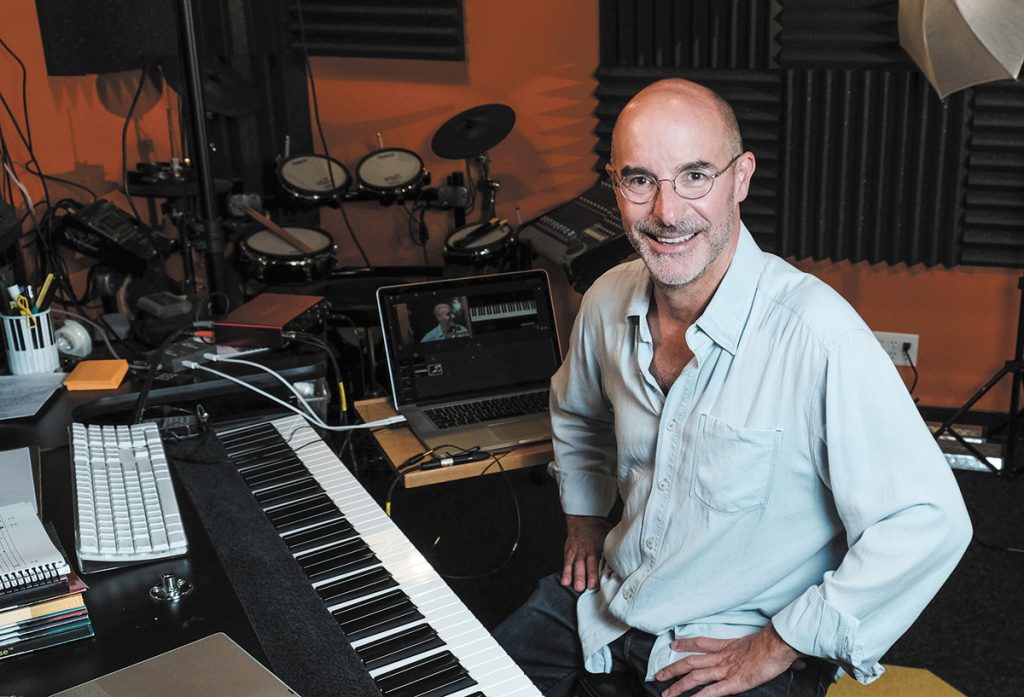 Scott Houston and his teaching tools: keyboards, his computer and the internet. (IBJ photo/Eric Learned)

The pandemic has Indianapolis musician and businessman Scott Houston playing a new tune.

Since March, Houston has gone from singing—metaphorically—Frank Sinatra’s “High Hopes” to belting out Louis Armstrong’s “What a Wonderful World.”

Of course, Houston knows there’s nothing great about the pandemic itself—but what it’s done for his business couldn’t be better.

Houston’s Indianapolis-based company, Piano in a Flash, teaches adults how to play the piano using a simplified version of sheet music. He said students using his online, interactive courses can learn to play songs in days, not years.

Houston founded Piano in a Flash in 2013 and saw steady—albeit slow—growth. Then in March, lightning struck.

If Houston’s name sounds familiar, it could be because his company is an active online advertiser. But you also might remember him for his starring role in “The Piano Guy,” an instructional TV show that aired new episodes on PBS-affiliated channels across the country from 2003 to 2012.

For his work on the show, which he also co-produced, he earned six Emmy Awards. The show still airs in reruns.

These days, the keyboard that occupies Houston most days is attached to his computer, not to the grand piano he used on the PBS show.

Houston answers his students’ emailed questions—complete with personalized video and audio demonstrations attached—within 24 hours, but thanks to the recent rapid growth, meeting that commitment is challenging. Houston said he’s answering 30 questions a day, three times as many as before the pandemic.

“I sit at my computer all day answering questions,” he said.

Piano in a Flash sales this year have

“Our revenue so far this year is up 230% over all of last year,” Houston said. “We’ve crossed the $4.5 million revenue threshold. It’s been a fun, but harried, existence this year.”

And while the tidal wave of growth has subsided a bit from its peak a couple of months ago, Houston said “the low tide now is still significantly higher than” before the pandemic.

Houston, 58, got his musical start as a hot-shot high school drummer. He enrolled in Indiana University with a dream of traveling the world as a drummer in a rock band.

However, during a summer music camp, Houston snuck into a piano workshop out of curiosity, and his life changed forever.

There, he learned how professionals play the piano through a modern, chord-based style. It not only revolutionized his views on music, but also instilled in him a passion for the piano.

Houston dropped out of the IU percussion program his senior year to focus on developing his piano skills.

Since then, he said, he has made it his mission to help others, particularly adults, “realize the joys of learning how to play the piano through a much simpler—yet musically correct—style of learning.”

But his path to starting Piano in a Flash is a twisty one.

After earning a business degree from IU, Houston worked in finance for two years. “And I hated it.”

He next lived the life of a “starving artist” for three years, then started a music publishing business in 1991 with his father, James, who played the baritone saxophone with some of the biggest names in the business.

“We sold education-print music,” he said. “You know, band music.”

His target market was music teachers and piano instructors.

“From that, it became obvious there was this completely underserved adult market,” Houston said. “I thought there was a giant opportunity to build a better mousetrap and figure out a way for adults to be more successful at playing piano.”

In 1996, Houston started doing 3-1/2 hour piano workshops for adults at colleges and universities. It grew to 100 one-day workshops a year.

Houston’s students said he was equal parts musician, teacher and comedian on stage.

“That’s where I got good at teaching adults how to play piano,” he said. “I figured out what works and what doesn’t.”

One of those charmed was Ken Mills, who took one of Houston’s workshops in 2003.

“I was impressed with him and thought this might be a course a lot of people would be interested in,” said Mills, who now serves as president emeritus and chairman of Mills James. “It came down to his personality and his way of communicating that was compelling. Scott is a very smart guy and he knows how to convey these lessons.”

Despite his intelligence, Houston was never pompous or condescending. “He had the patience of a saint,” Mills said. “And he was always quick with a joke. His use of humor is brilliant.”

Mills approached Houston with his idea to create a TV show.

“A TV show—what performer wouldn’t jump at that?” Houston said.

Mills and Houston produced a pledge special for PBS later in 2003. The show successfully helped PBS stations generate memberships and raise money. It also led to the regular production of “The Piano Guy.” 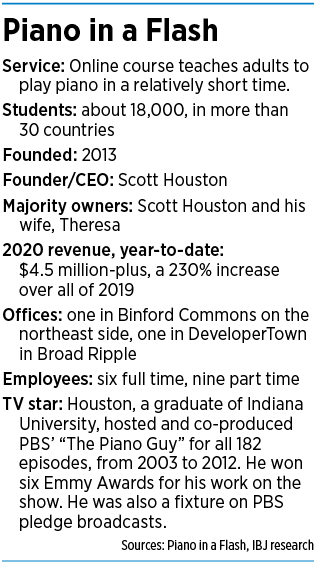 Over nine years, Mills and Houston co-produced 182 episodes of “The Piano Guy,” which aired in 90% of U.S. homes. In 2012, Houston took his hands off the keys—and the show ended its run.

“I had nothing else to say. I had described the C chord in as many ways as I could,” Houston said. “We had taught and played every tune everyone wanted to hear. I was definitely proud of the show, but I said, ‘That’s all folks.’”

Despite the show’s popularity, Houston said, it was a grind finding sponsors.

“It was difficult to break even doing the shows, but from a business standpoint, it was a fantastic brand-building exercise,” he said.

Meanwhile, the emergence of online video was giving birth to what Houston calls his “magnum opus.”

While doing the TV show, Houston had produced some instructional DVDs and was “making a modest amount of money” selling them, he said, but “there was no way for students to get feedback.”

Piano in a Flash combines the best of live and recorded lessons, Houston said.

“Providing live lessons creates a rigid schedule for students, and that can be difficult for adults with full-time jobs,” he said “With Piano in a Flash’s online videos, students can start, stop and rewind as often as they need to.”

He also sends students books and other printed materials to accompany the online lessons.

“Online and physical materials are a great one-two punch,” Houston said. “In the videos, I’m referring to the books.”

The third piece is the personalized feedback. If the volume of questions he receives continues to grow, Houston said, he knows piano players who can help answer them.

The biggest key to Piano in a Flash’s success might be its teaching method.

“The thing that stumps people from playing piano is not putting fingers to keys,” Houston said. “It’s that they never become good enough to read the notation.”

Houston knew from his own experience how easy the solution is.

“When I saw a lead sheet for the first time, I said, ‘For god’s sake, why didn’t we start with this?’ Reading [traditional sheet music] was like walking 10 miles trying to get to a place that was a mile away,” Houston said.

Mills explained that a lead sheet has “a single note melody line and, above that note, it has the chords. It can get you started playing fairly quickly. You don’t get overwhelmed by all those black dots.”

“The method I use to teach allows you to sound a lot hipper a lot faster,” Houston said.

RuthAnn Funderburk, a Texas schoolteacher, has tried for years to learn how to play piano. She got so frustrated in her attempts that the mere sight of the piano in her house was unpleasant.

Earlier this year, she ran across a Facebook ad for Piano in a Flash. She got sucked into Houston’s 90-minute infomercial and, before she knew it, she was paying $699 for all six Piano in a Flash courses. A single course—which takes about four months to complete—costs $149.

She started the program June 12. On the first day, the 66-year-old was playing “Amazing Grace” so well, her husband thought it was coming from the TV.

“It was a paradigm shift that was so amazing to me. It was 180 degrees from my previous piano lessons,” Funderburk said. “Now, playing is just too much fun.”

Less than three weeks in, she said, she can play 15 songs, including “Edelweiss,” “Ain’t Nothin’ But a Hound Dog” and “Aura Lea.”

“I think what Scott does with his class is a miracle,” Funderburk said.

‘This is for fun’

Houston insists he doesn’t “have a magic wand.”

“I don’t need one,” he said. “Just sit yourself down and I’ll teach you how to play. This is a days and weeks exercise, not a months and years exercise.”

Steven Metzger, a 76-year-old retiree living in Florida, started the Piano in a Flash courses 16 months ago after trying a free introductory online course.

“I was playing legitimate songs within weeks. I can play all kinds of songs, Christmas carols and show tunes,” Metzger said. “I think I’ve gotten pretty good with Scott’s lessons, and I continue to get better.”

Metzger, who started the courses on a small electric keyboard, got so excited by his progress that he bought himself a piano for his 75th birthday. “With my wife’s permission,” he added.

He’s had a regular email dialogue with Houston since buying all six courses. He’s on the fifth and thinks he’ll complete all six within two years.

“The man has a great personality and is always upbeat and has a little laugh in his voice,” Metzger said. “He just makes you feel good.”

And he’s not surprised by Piano in a Flash’s success.

“I’m on the internet a reasonable amount, and Scott pops up a fair amount and his pitch is very good,” he said. “And if word of mouth means anything, and if I’m a typical customer, I’m spreading the faith.”

Houston stressed that his class is not for people who “want to play at Carnegie Hall.”

“This is for fun. It’s to de-stress, not add stress. They call it playing piano, not working piano,” he said with a laugh. “This is my method, and I’m going to teach it. This is my magnum opus. And it’s an ass-kicking good value. If I get hit by a bus tomorrow, I know this will live on for a long time.”•