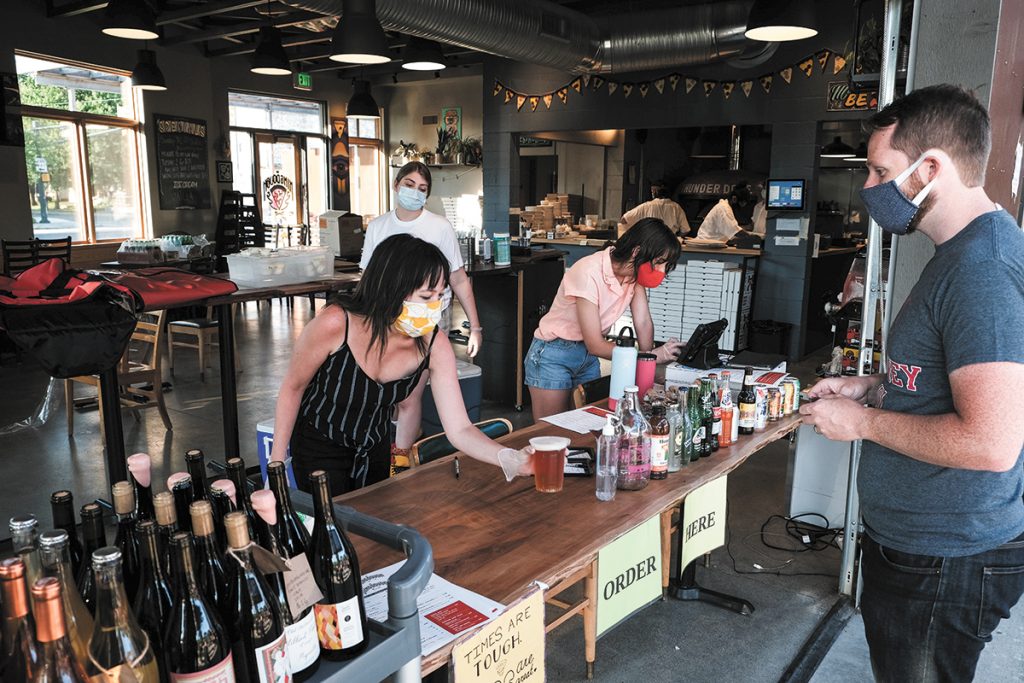 King Dough, 452 N. Highland Ave. in the Holy Cross neighborhood, is selling pizza, beer and other food for takeout but has not reopened for dine-in customers. Manager Ali Lindgren hands a customer a beer from several feet away. (IBJ photo/Eric Learned)

A spike in unemployment, waves of bankruptcies and business closures make it obvious the COVID-19 pandemic has deeply damaged the state’s and nation’s economies.

What lies ahead? That’s much less clear.

Even in ordinary times, economic forecasts are not 100% accurate. Now, with the emergence of a brand-new disease and all the health and economic uncertainties that surround it, economists are struggling to understand how bad the fallout might get and how long it might take to recover.

“What [economists are] really bad at is models when all the underlying conditions shift,” said Michael Hicks, an economics professor and director of the Center for Business and Economic Research at Ball State University. “The bigger the change, the less likely the models are going to be correct.”

A few months ago, Hicks thought Indiana’s economic downturn might be V-shaped—a sharp downturn followed by an equally sharp recovery. But now, he’s more pessimistic. “I think that’s no longer in the realm of possibility.”

He’s now predicting an economic cycle that resembles the Nike swoosh—a sharp downturn followed by a long, gradual recovery. “We’re still in the falling phase, and when we hit bottom, I think it’s going to be lengthy.”

Hicks said he thinks GDP will drop again in the second quarter, ending 2020 down 6% to 7% from last year. It should begin to recover next year, but a full recovery likely won’t happen until 2022, he said.

That view is shared by the Congressional Budget Office. In a report issued last month, that office said it expects GDP to shrink again in the second quarter before starting to recover, and that, by the end of 2021, it still will be slightly below what it was at the end of 2019.

The office also acknowledged all the unknowns caused by COVID-19, saying in the report that “an unusually high degree of uncertainty surrounds these economic projections.”

The Bureau of Labor Statistics, which releases unemployment figures each month, is also having trouble grappling with the data. The unemployment rate had been at or below 4% since March 2018 before climbing to 4.4% in March of this year, followed by a spike to 14.7% in April.

On June 5, when it announced May’s national unemployment rate of 13.3%, the BLS noted that the actual rate for March, April and May likely was about 3% higher than reported. The discrepancy was caused by a “misclassification error” in which some furloughed workers were categorized as employed when they should have been deemed unemployed, the BLS said.

The BLS counts people as unemployed if they are not currently working but want a job and have looked for work within the past month. Furloughed workers don’t neatly fit this description because, if they expect to return to their job, they’re not likely looking for another one.

“We don’t have good categorizations for these kind of things,” said Kyle Anderson, a clinical assistant professor of business economics at Indiana University’s Kelley School of Business at IUPUI. “I think there’s a lot of gray area with a lot of this data.”

Anderson said his economic outlook is actually more optimistic now than it was in March or April, because businesses are reopening more quickly than he anticipated. That said, he isn’t looking for a quick recovery. “I think we could be four or five years away from unemployment under 5% again.”

Anderson estimated that unemployment could be at 7% to 8% a year from now, “but I think there’s a lot of variability in that.”

The Congressional Budget Office, whose latest prediction runs only through the end of 2021, is less optimistic. Its prediction is for an unemployment rate of 11.5% in the fourth quarter, declining to 8.6% at the end of next year.

“Things will eventually recover, but it will be a much longer time than your typical recession,” said Cathy Zhang, associate professor of economics at Purdue University’s Krannert School of Management.

One factor, Zhang said, is that economic policies meant to ease this crisis aren’t necessarily having the expected effect.

As an example, she cited the Paycheck Protection Program, which offers forgivable loans to help companies stay afloat. Some of the small businesses the program is meant to help are finding it challenging to meet the employment levels and other requirements for loan forgiveness.

“A lot of smart people did think a lot about this,” Zhang said. “But because this is such a novel event, the consequences are hard to predict.”

And interest rates were already very low when COVID-19 hit, she said, effectively shelving a tool policymakers might otherwise have deployed. “There’s only so low rates can go.”

According to that site, Indiana consumer spending hit its low point on March 31, when it was 35.9% under what it had been in late January.

Spending then began to rebound. As of June 10, the most recent data available, consumer spending in Indiana was up 4.3% over January. The data, from data analytics firm Affinity Solutions, is based on credit and debit card purchases.

The data also shows that spending in some sectors of the economy has been hit much harder than others.

In late March, for instance, spending on restaurants and hotel stays was down 70%. As of June 3, that category was still 28.9% below January. Arts, entertainment and recreation spending plunged a stunning 94% in March; as of June 10, it was still 59% below January levels.

In contrast, grocery spending has mostly remained above January levels, spiking at 65.7% above the start of the year on March 18. Spending as of June 3 was 11.2% above January.

Spending on apparel and general merchandise dropped in late March to 57.3% below January levels before rebounding. As of June 10, it was 13% above January.

Consumer sales “are recovering in many places, but they’re not in the same sectors that they were,” Hicks said. “People are changing their spending patterns.”

Hicks offered his own family as an example: The Hickses canceled their summer vacation plans and instead spent money on home-improvement projects. They’re also socking away extra savings in the event Ball State institutes furloughs.

Hicks said it’s unknown whether consumers will resume previous spending habits as the economy continues to reopen or whether some changes will become permanent. Consumer spending is a major driver of the nation’s GDP.

Another “X factor” that’s clouding economic outlooks: the uncertainty around the disease at the heart of the downturn. When will scientists develop a vaccine or treatment? How successful will public-health officials be at getting people to wear face masks and avoid crowds?

“Obviously, there’s a lot we don’t know about how this is all going to play out from a health perspective,” the Kelley School’s Anderson said.

Even in the best-case scenario, he said, a COVID-19 vaccine is months from being available and a strong economic recovery won’t take root until science figures out how to conquer the coronavirus.

Brian Burton, CEO of the Indiana Manufacturers Association, said he has “great concern” about the possibility that a second wave of infections will lead to another round of mandated closures.

“It would be very difficult for the economy to handle another shutdown,” Burton said. “The federal government has pumped trillions of dollars into the economy, and at some point, their ability to continue to do that will be hampered.”

In an Indiana Manufacturers Association member survey last month, 85% of the 123 respondents said they remained in operation during the shutdown, though more than half reported reducing hours or trimming their workforce.

More than 90% said customer orders had dropped because of the pandemic, with 32% reporting a drop of more than 50%.

And 81% said they had applied for federal assistance in the form of a PPP loan or a disaster recovery loan.

The survey also asked respondents how optimistic they were about the health of their business going forward.