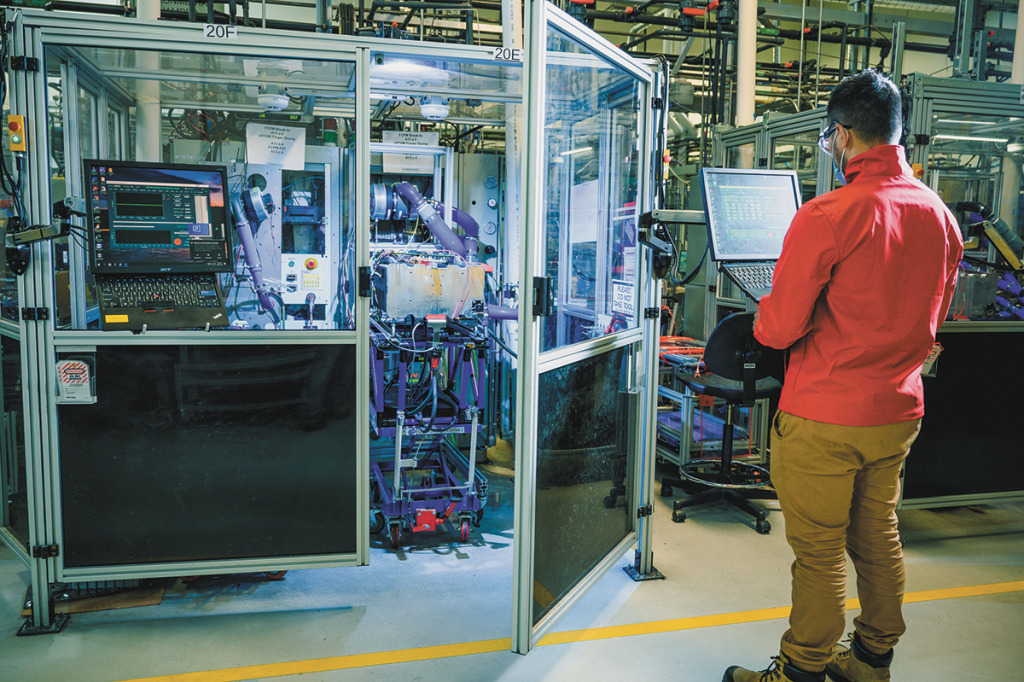 Let’s say it right upfront: It’s too early to know whether hydrogen power will ever catch on for widespread use. High costs and lack of infrastructure pose significant challenges.

Even so, Columbus-based Cummins Inc. is bullish on hydrogen’s possibilities to power everything from buses, trains and trucks to industrial equipment. The company famous for its diesel engines has invested hundreds of millions of dollars in hydrogen technology over the past year or so, while at the same time acknowledging it doesn’t know when, or if, these investments will pay off.

The bet is based on the premise that hydrogen can play a vital role in slashing emissions in highly polluting industries under pressure to reduce them. Unlike fossil fuels, hydrogen burns cleanly when mixed with oxygen in a fuel cell.

“We believe [hydrogen power] is a very substantial opportunity for the planet and for Cummins,” CEO Tom Linebarger said during an online program called Hydrogen Day that the company hosted Nov. 16 to tout its hydrogen investments. “The transition to a hydrogen economy will impact many industries.”

Cummins has been exploring hydrogen fuel cells for more than 20 years, but the company’s first serious investment in the technology came in September 2019, when it spent $235 million to acquire an 81% interest in Toronto-based Hydrogenics Corp., which makes hydrogen fuel cells and hydrogen-generation equipment.

It followed that with two investments of undisclosed amounts in Vancouver, British Columbia-based Loop Energy, which makes fuel-cell electric range extenders for use in vehicles like trucks and buses.

“The climate crisis has taken a much deeper, more meaningful shift over the past five years,” Davis said. “You’re starting to see people really committing themselves on the corporate side and the government side.”

“There are many regions around the world that have their own carbon-neutral goals. Europe is very aggressive on that front,” Elkott said. “Hydrogen is one vehicle to get us to those goals, those targets.”

As further evidence that hydrogen is hot, Volkmann referenced Nikola Corp., a Phoenix-based startup that is developing electric- and hydrogen-fuel-cell-powered vehicles. The company went public in June and saw its shares more than double in price within days.

“It was a big event, and when things like that happen, people take notice,” Volkmann said of Nikola’s public debut.

Cummins said its goal is to generate at least $400 million in revenue from electrolyzers by 2025. It already has a few projects in the works.

In Washington state, the Douglas County Public Utility District is building a hydrogen-power facility expected to be operational in 2021 that will use a Cummins electrolyzer.

Cummins is also supplying the electrolyzer for a plant in Becancour, Quebec, that’s expected to come online within a few months.

But Cummins isn’t expecting hydrogen power to be a profitable part of the company anytime soon.

The company forecasts that, between 2020 and 2022, its New Power Segment will lose a total of $500 million as measured by so-called EBITDA—earnings before interest, taxes, depreciation and amortization.

That’s a relatively small sum for Cummins. Overall, it reported EBITDA of $3.6 billion in 2019, with the New Power Segment losing $149 million.

The company hasn’t said when the segment might begin to turn a profit. That will depend on how quickly the technology is adopted. And Cummins and others acknowledge that the industry must solve formidable challenges if hydrogen is to gain widespread adoption.

Cummins, which has its own goal to become a carbon-neutral company by 2050, is focused on what’s called green hydrogen—hydrogen that’s produced by an electrolyzer that’s powered by renewable energy such as hydroelectric, solar or wind.

Right now, only about 1% of the 70 million tons of hydrogen produced each year is considered green. Most of the rest is produced using natural gas, which contributes to carbon emissions.

Currently, Cummins says, hydrogen produced with natural gas costs $1.50 to $2 per kilogram—an amount that can power a passenger car for about 60 miles. In comparison, green hydrogen costs $5 to $6 per kilogram.

“It is still pretty cost-uncompetitive at this stage,” said Jesse Kharbanda, executive director of the Indianapolis-based Hoosier Environmental Council.

The current lack of hydrogen infrastructure is another challenge.

The Hydrogen Council, an industry group Cummins belongs to, predicts that only 2.5% of heavy trucks will behydrogen-powered by 2030. In comparison, the council and Cummins predict that 10% of trains and buses will behydrogen-powered by then. The difference in adoption rates is in part because trains and buses typically return to a fixed base where they can recharge daily—unlike long-haul heavy trucks.

Cummins says it could capture about 15% of the hydrogen market as it develops.

Linebarger said government incentives could help spur private companies’ interest in building this infrastructure. He also said that, in order for green technology to become cost-competitive, government needs to place a cost on carbon.

Carbon cost, or carbon pricing, refers to a variety of tactics designed to reduce carbon emissions by spurring clean-energy production.

Volkmann said he doesn’t put much stock in Cummins’ hydrogen market predictions because some of the variables around hydrogen adoption lie outside the company’s control. “If we don’t have a price on carbon, it’s going to be tough, and that’s out of their hands.”

Kharbanda, too, said that, while green hydrogen shows promise, it’s too early to know which green technology might emerge from the pack.

“There’s just a tremendous amount of innovation happening, really driven in the European Union and China by public policy and driven in the U.S. by a combination of state policy and demand preferences,” Kharbanda said. “It’s extremely difficult to forecast.”•

7 thoughts on “Cummins investing in hydrogen power, although path to profitability uncertain”