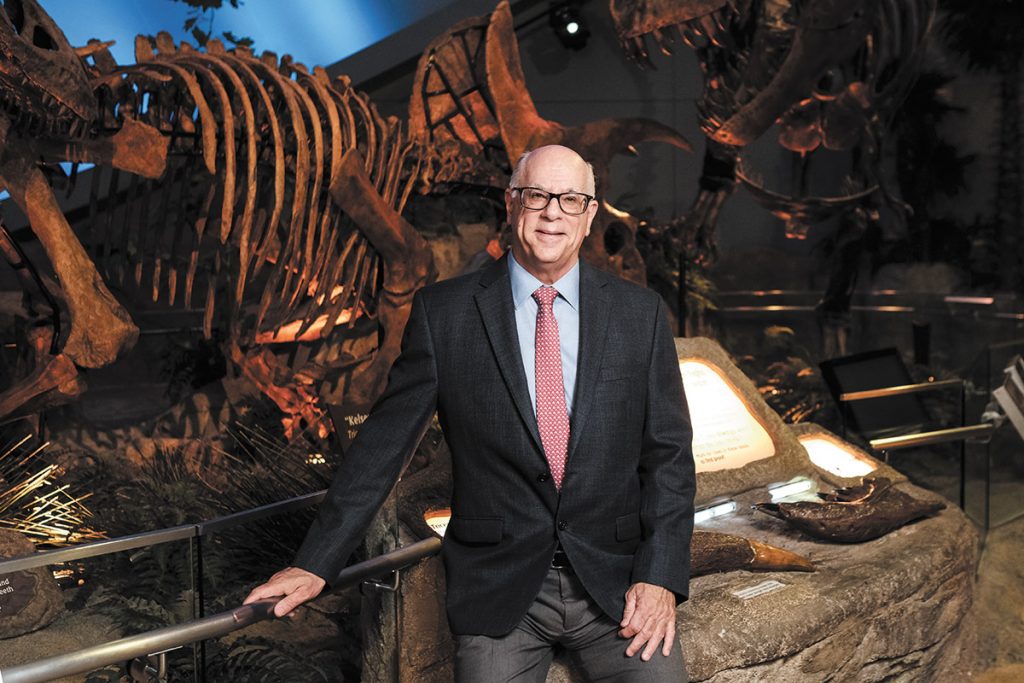 Jeffrey Patchen has seen a lot of physical change during his 20 years as president and CEO of The Children’s Museum of Indianapolis.

In the first decade after Patchen’s arrival in 1999, the 30-acre, five-story facility at 3000 N. Meridian St. added a 950-space parking garage, converted an in-the-round theater into its popular Dinosphere exhibit, and expanded its welcome center—an addition that increased the building’s size to 473,000 square feet.

Then, 18 months ago, the museum opened the Riley Children’s Health Sports Legends Experience, a $14 million outdoor sports park adjacent to the museum that’s backed by big-name sponsors like Lilly Endowment Inc., the Indianapolis Colts and the Indianapolis Motor Speedway.

But despite the monumental growth and change that central Indiana’s most-visited museum has seen in the past, Patchen keeps his eyes forward.

This is your 20th year with the organization. What do you consider the biggest accomplishments for you and the museum during your time here?

I always am looking forward to the exhibits. It’s always the exhibits that we’re working on, the ones that are coming in the future. But looking back, I think it is moving the museum from where it was in ’99 to becoming much more of a family institution and a family learning experience, so there is as much for grandparents and parents as there is for young children, which has been great for us because we are object-based. We have 130,000 objects that we own here at the museum, and objects—they tell stories, they put things into perspective, they allow grandparents and grandchildren to have conversations. So I think it’s moving to be more family-focused and family-learning centered.

The Children’s Museum spent tens of millions of dollars to create the Sports Legends Experience, an outdoor sports park. It’s unlike anything the museum has done before. How has the launch of that attraction gone?

It’s given parents and grandparents an opportunity to experience, many times, new sports. A lot of kids haven’t experienced tennis or golf or sometimes hockey here in central Indiana, so it’s been very, very successful. The numbers are up this summer over last summer.

Does that attraction have an educational component? Or do you see it as just recreational?

Where do your visitors hail from?

About 50% of our visitors come from Indiana—32% from the greater Indianapolis area and about 18% from the rest of Indiana. The other 50% is outside the state of Indiana or more than 100 miles away, which probably contributes to us being among the top 25 most-visited museums in North America. Being a regional, cultural tourism attraction is important for the city and the state, as well.

What is your favorite exhibit?

It’s always the exhibit that we’re working on. We’re working on an expansion to Dinosphere to add giant, long-neck sauropod dinosaurs from the Jurassic Period. We are leasing land in Wyoming, a square mile of prime Jurassic fossil land, and we are excavating at least two large animals that will be along the walkway as you go down Dinosphere. They’re 85 to 110 feet long. That’s pretty exciting. We hope late 2021 or 2022 for it to open.

You are fortunate to have a huge endowment. How large is it now? Can you comfortably draw from the endowment each year without cutting into the principal?

It’s about $325 million. We’ve been able to do that. We have two fiscal policies that are really important. One is, fund before we build, which means we don’t have to have all the money but we need to know exactly where it’s coming from, and sometimes it’s stretched out over a period of time. The other is, endow before we build. Our permanent exhibits, which require regular maintenance and upgrading and paint and all of that, we raise money for an endowment fund for that exhibit. Those have been two really important policies that, particularly through the recession in 2008, helped us not have to cut staff or raise prices more than necessary at the museum.

The museum has been hitting attendance records. What are you drawing annually?

We have about 1.25 [million] or 1.27 million annually. We had a wonderful June that set all-time attendance records, all-time membership attendance records. Some of that is attributed to the lineup of exhibits but also the outdoors and the Sports Legends Experience being open for its second year.

Long term, what are some of the projects on your wish list?

Oh, gosh. The Power of Children exhibit celebrates the lives of three children: Anne Frank, child of the ’40s; Ruby Bridges, child of the ’60s; and Ryan White, child of the ’80s, so we are looking to add a fourth child that we have not yet announced, that will be the child of the 2000s, which is very exciting.

Believe it or not, we’re coming up on 20 years since the second revision of the Carousel Wishes and Dreams Gallery where the carousel is, so we’re looking to make some changes there and have the other parts of that gallery be more interactive and a little bit more up to date.

What is your favorite part of this job?

I think it’s seeing the dynamic, immersive ideas that are multigenerational come to life, both in the museum—from how we go from concept or idea to raising the dollars to fabricating the exhibit and installing it and opening it—to the many donors that get engaged with the museum [who are] very excited about seeing their ideas and their investments come to life as well. Both are very, very exciting parts of this job.

And, of course, the smiling faces. Every day when I come to work and when I go home, if I’m having a bad day, it’s always a reminder of the joy here.•