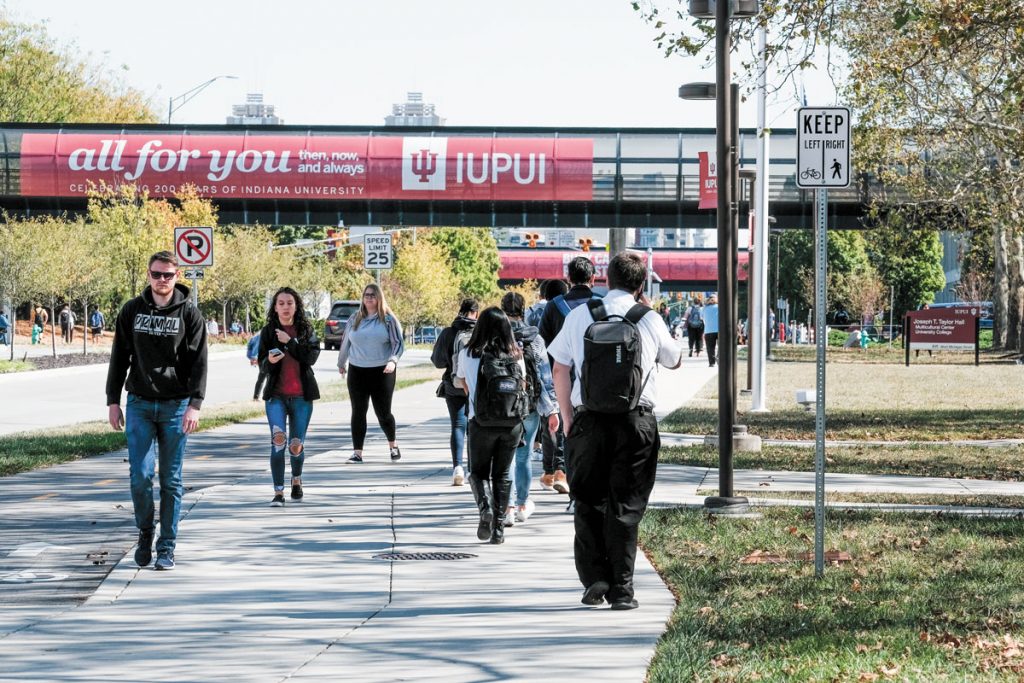 IUPUI is already widening its recruitment efforts beyond Indiana to prepare for the drop in graduating high schoolers. (IBJ photo/Eric Learned)

Colleges and universities across the nation have experienced an enrollment surge over the past decade, but a slowdown in birth rates means the good times will come to an end for institutions unwilling to adapt.

Schools in Indiana and nationwide are preparing for a significant drop in the number of high school graduates that experts say will eventually lead to a dramatic transformation of higher education.

Colleges that want to maintain their enrollments and their revenues will have to appeal to a different kind of student—and do a better job keeping the students they attract. Others might shrink or make do by dipping into endowments. Some schools are likely to consolidate, while others will probably close.

The key, experts say, is to start planning now for the changes, which will hit in 2026, if not sooner in Indiana.

“We will see consolidation in the industry, and some schools will be ahead of that and some schools, unfortunately, won’t,” said Brad Kelsheimer, chief financial officer at Indianapolis-based Lumina Foundation. 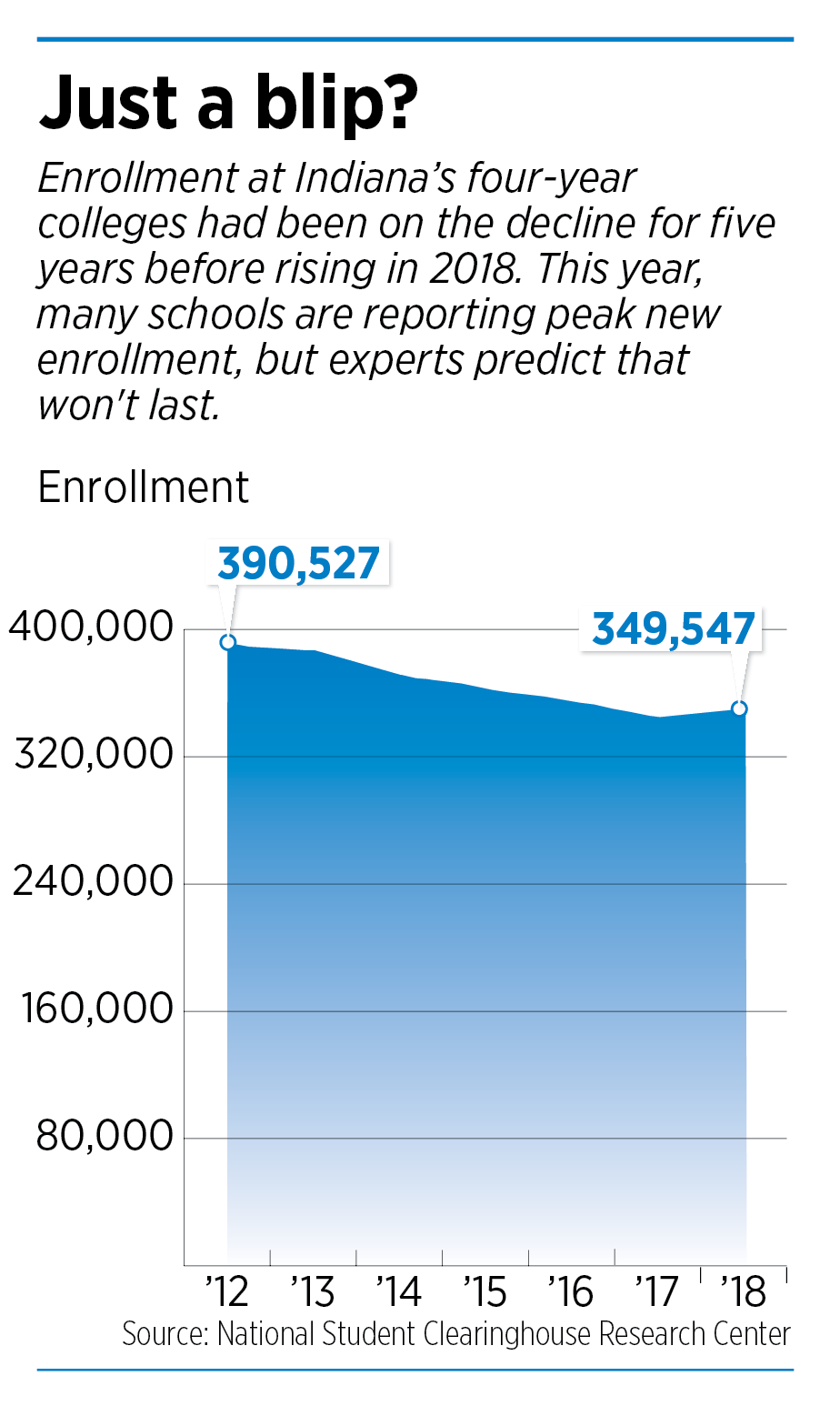 In 2019, 75,000 high school seniors graduated in Indiana—the most in the past two decades. But beginning this year, that number is expected to start falling, according to projections from the Western Interstate Commission for Higher Education, which tracks graduates across the country.

By 2032, the commission projects, the number of Indiana high school grads will have dropped 6,600—or 9%.

The national outlook isn’t any better, though some areas of the country are expected to fare better than others. Nathan Grawe, an economist at Minnesota-based Carlton College and author of “Demographics and the Demand for Higher Education,” predicts the college-going population (ages 18-25) will drop 15% from 2025 to 2029 and continue to decline beyond 2030.

What’s been described as an upcoming enrollment cliff can be linked to the Great Recession, when young families either held off on having children or avoided it altogether. Birth rates in the United States have continued to fall since then, and they’re not expected to suddenly rise.

In Indiana, universities and colleges are already revving up recruitment efforts, focusing on retention and looking beyond high school graduates for prospective student pools to position themselves to weather the storm.

Kelsheimer, who previously served as senior vice president for finance and administration at DePauw University, said some schools are already suffering decreased enrollment but the “big hit” is coming in 2025 and beyond.

Colleges that survive, he said, will be ones that focus on three strategies: improving retention, reaching potential students not currently served by higher education, and developing strategic partnerships with employers and other schools.

Grawe warned that not all college and universities will feel the demographic pain equally. He projected that elite schools—those ranked in the top 50 by U.S. News & World Report—will see a smaller enrollment decrease.

Highly ranked schools will likely fare well, Grawe said, but university officials need to be cognizant that many factors might change people’s attitudes about higher education in general. 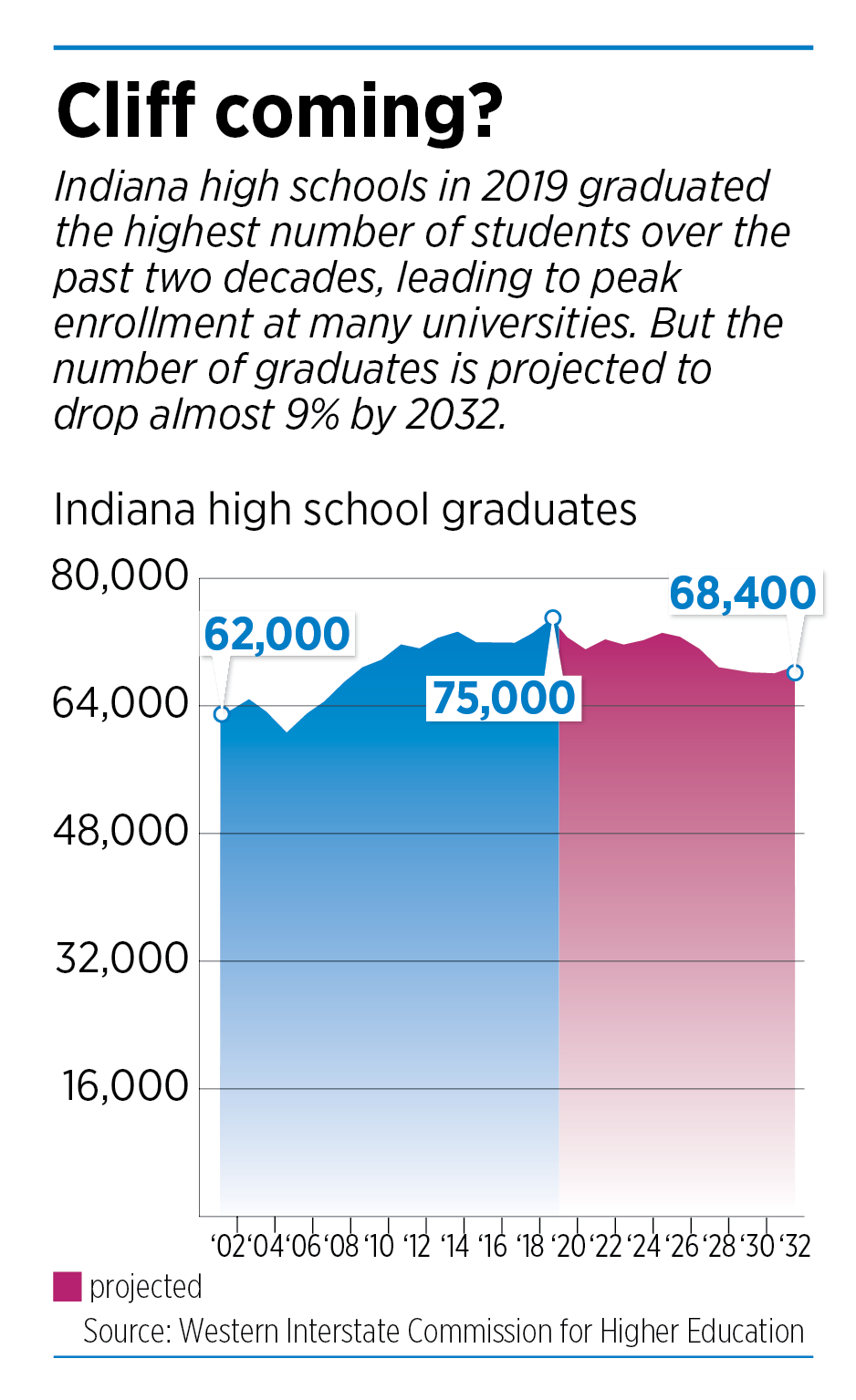 His research focuses on how schools will manage, based on the way college-going students have acted in the recent past. If those behaviors change, so could his predictions—especially as the competition for students grows fiercer.

The smaller pool of potential students will give those students more college choices, education leaders say.

Universities will have to prove their value more than ever before and differentiate themselves in the marketplace, said Kris Wong Davis, vice provost of enrollment management at Purdue University.

Potential students “need to see a really relevant reason to come into higher education and spend some time with us,” she said. “More than anything, it’s just going to be a very competitive atmosphere going forward that could be good for students but bad for higher education institutions.”

Generation Z—which the Pew Research Center defines as children born in 1997 and after—want an education package that is all-encompassing, Davis said. They’ll want to build their own pathways, by stacking credentials, for example, participating in demanding internships and having study-abroad experiences.

Gregory Hess, president of Wabash College, said the college spends a lot of time talking with prospective students and their parents about graduate outcomes and the value of a liberal arts education, focusing on the professional success of its graduates. Last year, for example, the school saw a 100% settlement rate—meaning all students had a job or went to graduate school six months out from graduation.

“We think stuff like that will continue to turn heads as we go into a softer, less-predictable market,” Hess said.

“We can’t just rely on the state of Indiana anymore to meet our enrollment goals,” Bradshaw said. “We really need to focus outside of that.”

The college participates in the Midwest Student Exchange Program, a consortium of states that offers tuition discounts to out-of-state students. Students in Illinois, Kansas, Minnesota, Missouri, Nebraska, North Dakota, Ohio and Wisconsin can attend IUPUI for $13,462 a year, instead of the out-of-state tuition fee of $29,806.

That program, plus the additions to campus housing and residential amenities over the last decade, increases the likelihood students from out of state will consider IUPUI, Bradshaw said.

At Earlham College this year, recruiters have expanded efforts beyond key feeder markets and are deployed in every state, meeting face-to-face with students and their parents, said David Hawsey, interim vice president for enrollment management.

The college is also working to broaden its international base, targeting high school exchange students already in the United States who could extend their time here.

And just this month, Butler University unveiled a strategy that focuses on increasing lifelong learning opportunities and making them more affordable and flexible. The initiative doesn’t specifically name adult learners, but the new opportunities include growth in customized corporate education programs, non-degree certificates and credentials, and community-focused talent development programs.

The new strategy comes as another wraps up. Butler 2020 included an objective to increase the undergraduate full-time count to 4,700, which the university achieved in fall 2018 with increased recruitment efforts outside Indiana as well as increased retention efforts, said Lori Greene, vice president for enrollment management.

Kelsheimer said approximately 600,000 adults in Indiana have some college credits but no degree. About 1 million more have no degree, no credentials and no college education. They represent a potential untapped market, he said.

Brad Wheeler, vice president for information technology and chief information officer for Indiana University, said a ton of education will be consumed in the next decade that is not related to graduating high school seniors, including career switchers, as the economy evolves and people just want to continue learning. Plenty of that will take place online, he said.

The caveat, Wheeler added, is that offering quality online experiences requires a lot of investment. Indiana University, in Bloomington and beyond, has already made that investment, he said.

Focusing on retention and completion strategies might help some colleges shore up total enrollment, Kelsheimer said.

“You know, you’re talking about a smaller group to recruit from, but you have students in the mix that, you know, in many cases are not graduating,” he said. “Publics in Indiana are graduating at a 41% rate. Bump that by 10%, and you have a different economic model.”

“I think there’s a ton of low-hanging fruit on the retention side,” he said.

Grawe echoed those sentiments, saying universities can prepare for the declining number of new students by doing a better job retaining the ones they already have, something many schools haven’t always prioritized.

That’s not the case at DePauw University, which has one of the highest freshman retention rates in the country at more than 90%.

Robert Andrews, vice president of enrollment management at DePauw, said there’s long been a general mantra that colleges can just go out and recruit more students if retainment rates fall. But since the enrollment cliff will prevent schools from relying on that tactic, Andrews said, he hopes they’ll do a better job of ensuring that students who enroll actually graduate.

Experts, including analysts for Moody’s Investors Service, predict small colleges will struggle the most in the upcoming competition.

“Their small size, their comparatively high cost, and sometimes even their traditional pitches about the lifelong value of a liberal-arts education work against them now, making their situation even more precarious than that of many larger institutions,” the Chronicle of Higher Education said in 2016.

“Small colleges are discovering—some faster than others—that they have to be acutely sensitive to the evolving whims of students and the concerns of parents, as well as nimble enough to meet the marketplace on its terms.”

Still, Indiana’s small colleges say their liberal arts education will help them through the coming years.

At Earlham College, officials are banking on the school’s Quaker values appealing to Generation Z.

“This is the school you want to attend to help be a change agent,” Hawsey said. “It’s a very challenged and difficult world right now. That’s what this school was designed to do. That’s why I don’t think we’re going anywhere. We’re going to be just fine.”

Additionally, Earlham has a large endowment for its size, he said. When the recession hit in 2008, many schools with small endowments found it difficult to make ends meet, but Earlham was able to leverage its endowment to close revenue gaps, Hawsey said.

A large endowment will make a small private school heathier in coming years, Kelsheimer of Lumina said, because it can offset shortages in private schools’ two other funding sources: tuition and annual giving.

Private schools with small endowments are much more reliant on tuition—an expense prospective students and their parents will weigh heavily in a competitive market.

“Those able to weather the storm are likely to have larger endowments,” he said.•