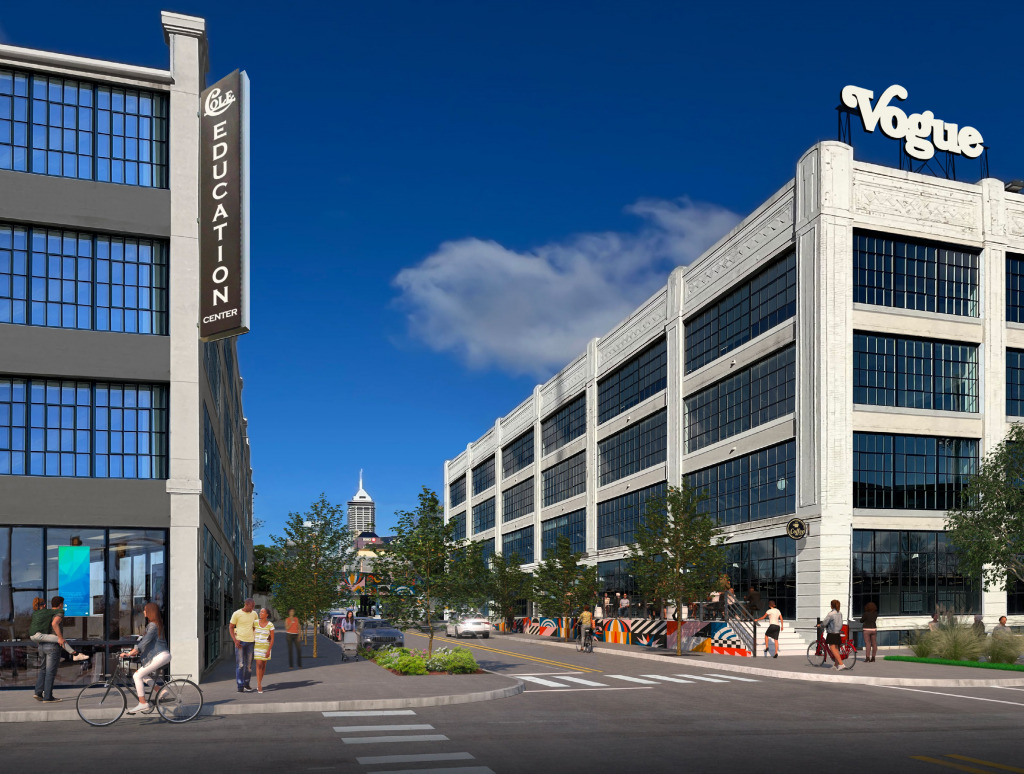 The Cole Campus, seen looking west toward downtown along Market Street. (Courtesy of the City of Indianapolis)

The Department of Metropolitan Development on Wednesday announced it has selected 1820 Ventures LLC’s $120 million proposed overhaul of the properties in a project that includes apartments, educational components, an event center, retail space and a co-working office area.

The project—which 1820 and city officials are calling the Cole Motor Redevelopment in an homage to original tenant the Cole Motor Car Co.—would complement $275 million in investment already planned for the Elevator Hill corridor.

It is the second proposal for the reuse of city-owned properties in as many months, following the city’s selection of Gershman Partners and Citimark for the development of City Market East in July. The city is trying to offload nearly 19 acres of property in the coming years.

“This is a highly-visible location … so, there’s an opportunity there to do something really meaningful,” said Jeremy Stephenson, managing partner of 1820 Ventures. “What we’re doing is kind of thinking bolder, particularly with the challenge of the perception as a jail—there’s a component that means we need to push further so we can change the perception and people’s minds around what’s possible” for the property.

The project is being co-designed by Indianapolis firms DKGR Architects and Meticulous Design and Architecture, the latter of which is a tenant at Elevator Hill.

The Jail II building is expected to feature 110 to 140 apartments—a mix of market-rate and affordable one-, two- and three-bedroom units—along with a rooftop deck and amenities including a dog park and fitness center.

The first floor of that building is expected to have a 15,000-square-foot space set aside for an Early Childhood Center, able to accommodate up to 300 children, and another 10,000 square feet of flexible space for a new Career Pathway Center, both from Ball State University. Indianapolis Public Schools is still considering involvement in the educational components of the Cole project, as well.

Details of those partnerships are still being finalized, though Stephenson said the educational component, in his mind, is critical to the growth of the neighborhood and downtown as a whole, Jail II’s structure will also have multiple retail storefronts along Washington and Market streets focused on local tenants

The Arrestee Processing Center property would be home to a new 60,000-square-foot concert and event venue from the operators of The Vogue in Broad Ripple, which would be housed on the third and fourth floors and able to accommodate anywhere from 500 to 3,000 people. The first floor would have 40 in-building parking spots and retail spaces, while the second floor would be home to the co-working space of about 30,000 square feet.

Both buildings would see improvements to their facades—including the return of large, historically accurate windows—as well as new signage advertising major tenants and the apartment spaces. Several pieces of public art would also be displayed throughout the campus.

Stephenson said a parking garage could be built adjacent to the project as demand grows. If constructed, it would be shared by Elevator Hill and the Cole project. A 100-space surface parking lot will also be accessible to users.

As part of the Elevator Hill and Cole projects, Market Street is expected to become a multi-modal roadway that focuses on pedestrians, while Washington Street—which will eventually have a new Bus Rapid Transit line—will retain heavy emphasis on vehicular traffic.

As part of the development, 1820 Ventures plans to formally offer to purchase both buildings: Jail II at 730 E. Washington St. for $5.07 million and the Arrestee Processing Center at 752 E. Market St. for $2.28 million.

DMD Director Scarlett Andrews told IBJ that details of the deal will need to be worked out, but the city is not expected to own the properties as the project moves forward.

“It was important for us to think about this being an entirely private development and privately financed in the future,” she said. “We are still figuring out the final actual mechanism of disposition, but we do expect that they’ll be privately owned.”

The properties have been controlled by the city since 1996, when they were converted to jail facilities. The buildings were originally built between 1911 and 1922 and were home to the Cole Motor Car Co. before it dissolved in 1925. Over the past near-century, the property has been used by a variety of tenants, namely Service Supply Co., which was a prominent industrial fastener supplier in the United States in the mid-20th century.

Andrews added that the project is meant to serve as a gateway for the east side of Indianapolis, bridging downtown with an area that has long been separated due to the interstate and the railroad tracks.

The project from 1820 Ventures was selected over proposals from Third Street Ventures and TWG Development LLC, each of which proposed similar uses—apartments, office space and retail, along with parking components.

TWG’s $63.6 million project called for about 200 total apartment units and the construction of three additional floors atop the existing APC building, as well as more than 300 spaces of parking. Third Street’s proposal, which would have been for a $77 million project, called for about 150 units in Jail II and the entire APC to be configured into office space and a first-floor parking garage. It would have also included about 30,000 square feet of artist studios and commercial space between the buildings, much of which would have been along Market Street.

City officials said 1820 Ventures was the only firm to deeply involve neighborhood organizations like the the Holy Cross Neighborhood Association and the Cole-Noble Commercial Arts District, something Stephenson said he felt was critical to the group’s plans for the site.

“If you think about what [this area] has been, and what it is today, it’s getting ready to change a great deal … in pretty short period of time,” he said. “What we’re trying to do from a use perspective is get them what they need, because they have different needs, from a use perspective. This project is going to be here much longer than we’re gonna be here.”

Scotty Z. Wilson, president of the Holy Cross Neighborhood Association, said “we view this project as an opportunity to help close the gap between the core downtown area and the near-east side. One site, one block at a time, hopefully this brings us closer to reimagining the potential of urban communities in Indianapolis.”

Jill White, president of the Cole-Noble district, was a member of the selection committee that ultimately chose 1820 Ventures’ project. She said neither of the other developers reached out to her to discuss their projects.

“We were excited when Jeremy …  came to us, prior to the project even getting submitted to the city, and they asked for input,” White said. “They implemented some of those things into their planning process, and then came back to us again and told us what they had been able to take from what we said. I think that their plan really accommodates us very well.”

The group also involved the Englewood Community Development Corp., and Stephenson met personally with the grandson of the founder of the Cole Motor Co., Joe Cole, to learn about the history of the buildings and their significance to Indianapolis.

The decision, he said, “was partially practical, and then it was a little bit emotional.”

Cole still owns the building where Sun King Brewing is located, around the corner on College Avenue, but sold the industrial buildings to Service Supply in the 1960s. 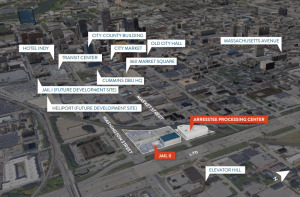 The project is expected to be mostly privately financed, with some funding  coming from members of Fred Abel LLC, a group of 20 local investors that owns the Elevator Hill campus. The involvement of members of the group has not yet been finalized, but Stephenson said it would be on an individual basis. IBJ Media co-owners Nate Feltman, Mickey Maurer and Bob Schloss are all members of the Fred Abel group. The development could also use outside investors, Stephenson said.

1820 Ventures is expected to work with the city to determine potential incentives for the project in the next several months, likely in the form of developer-backed tax-increment financing bonds in the same vein as what other developments have received in recent years. The project could also be eligible for federal historic credits, state redevelopment credits and New Market Tax Credits.

Stephenson said that while his firm will continue guiding the vision for the neighborhood, he is eager to continuing engaging with the community and other groups that want to have a voice in what direction that takes.

“Who do we bring into the room that kind of can help create ideas?” he said. “We’re not the only originator of ideas—in fact, most of them come from other people that are much better than our own. So, what can we do to kind of bring that into the table?

A preliminary timeline for the project calls for full construction on the APC and Jail II buildings to start in early 2023..