Written to be performed by two actors who can read their lines from printed pages in front of them, A.R. Gurney’s
“Love Letters,” in form, is simplicity itself. No special effects needed. No lines to be memorized or blocking
to follow. Heck, it doesn’t even require amplified sound or light cues. Think of it as the anti-“Avatar.”

Originally performed in 1998, the play is populated with just two flawed people by a frequently changing pair of
“name” actors, whose lives are bared in a series of letters written over a 50-year period. The contrast between
the messiness of a near-miss relationship and the commitment required to write down one’s feelings in letter form is
where the play draws much of its power. Never does it feel like the next step in these lives is a foregone conclusion. 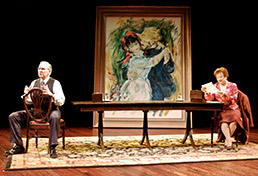 For the current Indiana Repertory Theatre production, director Janet Allen has opted to toss the core
conceit that Gurney uses to build his play. Unlike the original New York “Love Letters,”
the IRT show is limited to one pair of actors rather than rotating casts. The text, rather than read,
is fully memorized and staged. In fact, Allen’s production barely allows the actors to sit down.
They don’t make eye contact with each other, but they make full use of the IRT upper stage, where
their only other companions are a long desk (interesting in how it connects the two, even when their lives seem
far apart) and a reproduction of Renoir’s “Sketch after Danse à Bougival.”

Patrick Clear plays Andrew Makepeace Ladd III, and his name no doubt calls up a stereotype of WASP privilege,
something of which the character seems well aware. Priscilla Lindsay is Melissa Gardner, and if her blood
seems less blue, her commitment to the role is as solid, whether capturing her petulant grade school
years or her later, bitter life.

Gurney has left enough vagary to allow whatever two actors take on the parts to shift the balance, to
change our perception. Here, Clear is, well, clear, even in his bad decisions. Lindsay has a core bitterness:
Her sarcasm may be covering pain, but it’s also keeping the world at a distance.

“Love Letters” aches with moments of missed opportunities, of unsaid words, of bad timing
and misjudgments. It’s funny, yes, but it’s certainly not a comedy. The pain is too close to center
stage.

While there are clear upsides to giving “Love Letters” a fully staged treatment, there’s
also something lost. Moving the characters around puts more emphasis on the play itself, which falters when it seems to abandon
its own style. At points, letters are reduced to sentences that generate quick, short responses, as if the two were instant-messaging
way before their time. And, throughout, the sense of writing and reading is downplayed, which diminishes the impact of the
ending.

This approach also loses our chance to experience the play through different actors. After seeing it
at the IRT, I would have happily returned to it again with another pair of actors in the roles, not because of any disagreement
with the approaches of Lindsay and Clear, but because the nature of the play invites such revisits. I couldn’t help
but imagine the very different Andrew Ladds that could be sketched by Charles Goad or Eddie Curry or Michael Shelton or Robert
Johansen, to name a few. Or the Melissa Gardeners of Diane Timmerman or Constance Macy or Diane Kondrat.•