Here’s something you don’t see everyday: A public company whose founders hold special shares with supercharged
voting rights is giving up the special powers.

The company is Indianapolis-based athletic shoe retailer Finish Line Inc. Its shareholders approved a board-backed measure
a year ago to eliminate its special class of voting stock in June 2012. The structure being axed gives Class B shares held
by founders Alan Cohen, David Klapper and Larry Sablosky 10 votes apiece, while the regular Class A shares get just one vote
each. 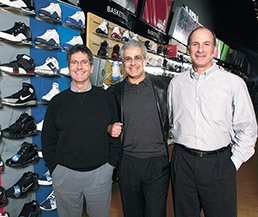 The change, made in consultation with the three men, reflects a changing of the guard at Finish Line. All are in their 60s
and retired from day-to-day management. Cohen’s resignation as chairman last month leaves no founder on the board.

“The company has new leadership, and, with that new leadership, new strategic plans and objectives are being developed
and pursued,” the board wrote in advocating the change last year.

The provision had been in place since 1992, when the company went public. Similar arrangements are in place at hundreds of
U.S. public companies, despite being widely criticized as unfair by shareholder activists.

But you can understand why entrepreneurs who build a business, then take it public embrace them. The riches that come with
an IPO can be immense. But the loss of control can be downright scary.

Those dynamics are playing out at two other high-profile Indianapolis public companies these days.

At Emmis Communications Corp., founder and CEO Jeff Smulyan owns just 17 percent of the broadcasting and publishing firm.
But thanks to his special Class B shares, his voting power is 69 percent—clout he has used to try to win support for
his plan to take the company private for $2.40 a share.

Under Emmis’ charter, Smulyan gets just one vote per share in going-private transactions such as the one he proposed.
So he couldn’t single-handedly approve his plan, which values Emmis at about $90 million. But he could vote down any
other offer.

The letter Smulyan submitted to board members in April pitching his buyout sent an unequivocal message that they need not
bother drawing out other offers.

“Just as a reminder,” it said, “Jeff Smulyan is not interested in any transaction involving the sale of
his … stock and will not support another transaction in his capacity as controlling common shareholder.” (For the
latest on the Emmis buyout offer, visit ibj.com).

At Simon Property Group, the Simon family appears sure to retain the right to elect four of 12 board members, despite efforts
by Bren Simon, Melvin Simon’s widow, to diversify her late husband’s estate. The seats are filled by holders of
the company’s 8,000 Class B shares, all of which are in the family’s hands.

The influence of founders’ families in public companies usually wanes over time. But few firms accelerate the process,
as Finish Line is doing.

When shareholders approved the change, founders owned 7 percent of the stock but had 41 percent of the voting control. Eliminating
the special voting rights could make the company more susceptible to takeover, board members acknowledged in last year’s
proxy statement, but they also argued that “a customary corporate governance structure” that puts more authority
in the hands of directors, rather than retired founders, was in the best interests of the company and its shareholders.

“The board of directors believes that in these challenging and uncertain economic times, it is in the best position
to determine the true value of the company and to negotiate more effectively.”

An intriguing 2007 analysis by Directorship magazine suggests Finish Line’s board did shareholders a favor.
It tracked 253 dual-class firms that went public from 1990 to 1998 and compared their performance with more than 2,300 single-class
firms that staged IPOs in that span.

“At dual-class firms, managers enjoy the protection of superior voting power, so there is no correlation between poor
stock returns and CEO turnover,” the magazine said.

According to Directorship, firms that eliminated the dual-class structure saw an immediate increase in share price
of at least 5 percent.•