Home » How CNO returned from the brink 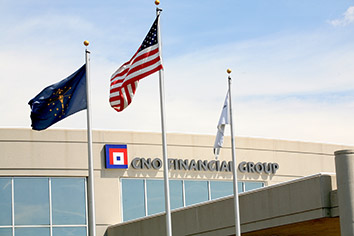 In March 2009, Conseco Inc. executives, including then-CEO Jim Prieur and then-CFO Ed Bonach, found themselves in a perilous corner.

The two had been charged just a few years before with turning around the struggling holding company now called CNO Financial Group, but the financial crisis was poised to derail their plans. Analysts had projected the company needed $400 million over the following year to stay afloat, but its stock was trading around 30 cents a share and its borrowing was already near its limit.

The options were slim for a company that went through bankruptcy just six years earlier.

But the Carmel-based insurer managed to escape another bankruptcy, yielding a company that today looks nothing like its former self. CNO stock recently traded around $17.50 a share, led in part by five consecutive years of profit. It has sold or spun off the last of its risky books of business acquired during go-go years, and it’s on the cusp of a significant bond-rating milestone.

While executives say there’s still work to be done, the comeback appears mostly complete, thanks to a combination of savvy moves to isolate poor-performing units, a well-timed cash infusion from a world-famous investor who saw value where others saw doom, and a more conservative approach to deal making.

“CNO has been a successful restructuring story,” Morgan Stanley analyst Nigel Dally said in a recent research note, “with initiatives such as strengthening its capital position, improving the consistency of its earnings, and shedding legacy exposures.

“Even after its recent strong performance, we continue to see reasonable upside,” Dally added.

Since CNO emerged from bankruptcy protection in 2003, one of its top goals has been achieving investment-grade status. The milestone appears close, thanks to 10 ratings upgrades since 2012. The company is now one notch from investment-grade status at A.M. Best, S&P and Fitch and two notches away at Moody’s. The label could come from at least one rating agency next year, granting CNO better interest rates and flexibility when issuing corporate debt, among other benefits.

The company is also looking for acquisition opportunities, something it hasn’t done in more than a decade. The idea harkens to the Conseco days of the 1980s and 1990s, when the company embarked on an acquisition spree. Some of those businesses set corporate fires that CNO managers spent years putting out, so the acquisition interest this time around comes with a more measured approach.

High-profile hedge fund manager John Paulson helped rescue the company in 2009, and Bloomberg reported last year that his firm recouped more than twice its $200 million convertible-debt investment. Paulson also purchased $150 million worth of common stock. CNO officials said Paulson and Co. had no CNO holdings as of the third quarter.

“CNO had a very sound business model and, with the financing we provided in September 2009, a much improved financial position,” a Paulson and Co. spokesman said in an emailed statement. “We put capital in when others hesitated because we saw CNO’s long-term potential once it emerged from the financial crisis.”

CNO’s turnaround has percolated for more than a decade, particularly since the 2001 recession knocked it into a tailspin. Before that, current executives said, Conseco had scooped up about 18 companies, including subprime mortgage lender Green Tree Financial.

The insurance businesses the company acquired were disjointed and many had under-priced, volatile products. Green Tree, which in part targeted mobile-home buyers, turned out to be a losing proposition. Conseco filed Chapter 11 bankruptcy in 2002—the country’s third-largest at the time as measured by assets.

The company emerged, stumbling, officials said. It saw some executive turnover until Prieur came in 2006. Prieur tapped Bonach a few months later. The primary goals were to cut the holding company’s risk and refocus the businesses that were doing OK—Bankers Life, Washington National and Colonial Penn—on middle-income Americans at or near retirement.

It wasn’t an easy task. The various businesses were basically stapled on the holding company, each with its own platforms and back-office administration. Many of the life and health insurance products were sold through third-party distributors, which largely meant they were priced to compete, not to reflect risk.

“And they were complex,” said Chief Financial Officer Fred Crawford, a former Lincoln Financial Group executive. “There might have been 10 or so versions of the same product.”

Prieur and his team moved to stop marketing the toxic, money-losing products, but still had to service them until they were sold. It found itself building mountainous reserves to cover the risk for some of these businesses. All the while, officials worked to remove redundancies in the three core businesses, consolidating underwriting and marketing, for instance.

Progress was slow and steady, but it was all nearly derailed during the financial crisis. The severe swoon hit CNO on two sides. First, the book value of the money it invests in financial markets was hit severely, meaning the capital it could draw if it had to liquidate would be less than originally invested.

Second, its bond ratings were downgraded along with other insurers’, which effectively led to stricter covenants including on debt-to-capital ratios.

The combination put CNO uncomfortably close to breaching its covenants in early 2009, prompting its auditor to issue a “going concern” warning.

“We were negotiating with lenders and investors like Paulson from a position of weakness,” Bonach, now CEO, said about having to inform the public markets about the going-concern warning.

“It’s a nightmare to have to face that perfect storm of events that you have to try to navigate through quickly and efficiently.”

The Paulson investment was instrumental, but it wasn’t the only factor in CNO’s recovery.

In 2007, the company sold a $3 billion block of an annuity business that had been known for low returns. In 2008, it spun off its low-returning, highly volatile Conseco Senior Health Insurance. The $3 billion business was mutualized and is now overseen by the Pennsylvania Insurance Department in the only deal of its kind, Bonach said. Both books of business would have been problematic during the recession, he said.

In 2010, the company bundled several underperforming businesses into a group called Other Conseco Business, or OCB. The group included Conseco Life Insurance Co., or CLIC, a $3.5 billion portfolio that had been CNO’s biggest source of volatility and litigation.

“One of the more savvy moves by CNO management was to isolate its troubled legacy positions in a newly created unit separate from its operating businesses,” Mark Palmer, an analyst at BTIG, said in an email. “This not only provided more transparency with regard to the troubled positions such that investors could more easily track management’s progress in addressing them, it also made it much easier for investors to value the company on a sum-of-the-parts basis.”

In late 2013, CNO reinsured—or transferred the risk—of a $550 million long-term-care business. The final Conseco demon, CLIC, was exorcised this past spring.

“With those two transactions, we really closed the ‘OCB’ block,” Bonach said, “And now we’re focused on our growing, go-forward businesses of Bankers Life, Washington National and Colonial Penn.”

CNO’s stock price increase has been partially fueled by its aggressive stock buyback campaign. Over the past few years, the company has spent more than $1 billion repurchasing stock and securities, including Paulson’s stake, with plans for another $60 million this year.

In addition to removing remnants of its past, CNO has been investing. Chief Business Officer Scott Perry, who was tapped for the position in 2007 after joining the company in 2003, is mostly responsible here.

The company’s leaders have achieved several efficiencies at the three core businesses. For instance, Perry said, 70 percent of CNO insurance applications are submitted electronically, compared to none in 2011.

And many of the 5,000 agents who work on the front lines of CNO’s controlled distribution network use tablets for their presentations, he said.

“So we’re making a lot of investments in the organic growth of our core franchises, but now we’re at a point where we have the capital,” Perry said. “We’re generating excess capital, we’ve stabilized the businesses, and we can begin looking for what I refer to as bite-sized acquisition opportunities.”

“We don’t want to go back to what got the old Conseco in trouble: taking on big, hairy, complex deals,” he said.

Company officials said CNO spent a lot of resources over the past two years on agents and other front-line operations, but that’s about to shift to the middle and back offices. More behind-the-scenes consolidation is coming, he said, including operations and administrative platforms.

“We have the products, the distribution,” Crawford, the CFO, said, “but we don’t yet have the infrastructure that is customary for a highly efficient, highly digitized middle-market company.”

He said one of the biggest challenges for any insurer—but particularly those in the middle market—is navigating the world of long-term care. Offering affordable products for middle-income Americans can get complicated as life spans increase, putting pressure on either consumer premiums or investor earnings.

“You have to attract the capital markets to the value proposition of what we’re selling; otherwise, capital will run away from us,” Crawford said. “And if capital runs away from us, we will exit the business.”

At least for now, CNO has weathered a seemingly decade-long storm and appears to be in a stronger position. It’s generating $300 million a year in free cash flow, officials said, which amounts to about $1.50 in free cash flow per share. It’s estimating low-double-digit sales growth in 2014, Bonach said.

“CNO has become one of the more interesting capital return stories in the financials space,” BTIG’s Palmer said, “as the company’s robust free cash flow has facilitated a healthy level of share buybacks.”•