Chuck Brewer describes himself as a Marine with an entrepreneurial streak.Now, the first-time politician seeks to take the baton from Greg Ballard and become the next Indianapolis mayor. The Republican says he has honed his leadership style during his military career, a decade in executive management at Sears Holding Corp., and time owning two downtown restaurants here: Potbelly and Soupremacy, both on Monument Circle.The next mayor, he said, should take an entrepreneurial approach to fixing the city’s public safety problems and securing a sustainable financial future. Though he’s been dubbed the underdog, as his opponent carries a major fundraising advantage, Brewer, 44, said he’s confident he’s the right man to guide Indianapolis into the future.

What motivated you to start your first business?

I was in the middle of my second combat tour in Iraq and, during one of the more stressful moments, I promised myself that when I got back to the U.S., I would pursue my dream of becoming my own boss and leave corporate America.

I learned in combat that life can be very short, and for us to spend time in life doing things that aren’t quite in line with our passion is an opportunity to examine it and hopefully make different choices. I did that. I prefer to create my own future rather than waiting for it to happen to me. I will embrace that kind of leadership philosophy as I think about our city’s future: taking control of our future, designing it based on our vision, and making it happen.

The restaurant industry is one of the toughest to navigate. What’s the key to success there?

The key to success in any business is customer service, and establishing the relationships with customers to make them feel as though they’re getting value for their money and make them want to come back.

As I think about those lessons relative to city government, there is an incredible amount of importance that I place on building relationships, not just among city leaders, but also with members of the community. Indianapolis has been blessed with some very strong community leaders. One of the things that has prevented us from being on the national headlines of neighborhood problems is the ability for us to engage with the community through strong relationships.

Why open up a soup shop? And what soup describes your personality? 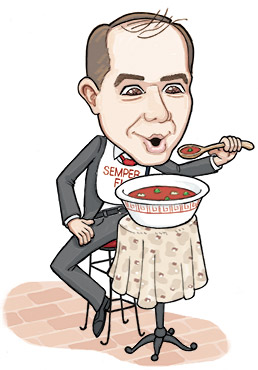 I was interested in creating a new concept that was original to Indianapolis and something we could own as a city. I grew up on beef stew and clam chowder—hearty soups—and I can remember as a child having a very strong affinity for good soup. There’s a certain comfort factor there.

The soup that describes me is called Hadrian’s Provender. It’s based on a recipe from a Roman soup with cabbage and vegetables that is traditionally still sold in the United Kingdom. It’s a mix between my love of Roman history and new yummy soups.

How have your experiences in the military and in business prepared you for being a mayor? And what sets you apart from your opponent, Joe Hogsett?

The Marine Corps is really good about shaping your leadership style and leadership principles and that’s been really formative in my life. I’ve got an entrepreneurial streak in me and [am] very much an innovator at heart, and that’s what differentiates my perspective moving forward. The city’s financial situation is such that it requires a very business-minded approach in order to navigate it through difficulties.

Career political candidates don’t have the kind of skill set to address these issues the way a business candidate would.

You’ve said that you’d like to create a criminal re-entry program in Indianapolis and motivate businesses to hire people who have committed felonies as they try to turn their lives around. Why do you think this idea is important?

If you’re trying to get your life back on track and not make the same poor decisions that have landed you in the spot where you had to serve time, you need to get a job and support your family. The systems seem to be set up so that it is very hard for people with felonies, no matter what level, to get jobs. Employers seem to have a blanket excuse not to hire them.

If we think about lifting up a very large segment of Marion County residents who need help, creating economic opportunity for them is really essential to changing and stopping this cycle of crisis. These are some of the best employees that I have. They’re very loyal and they are trying very hard to prove not just to themselves but to the community that they can add value and get back on the right track.

If you won the election, how would you work with Democrats to improve the city?

My leadership style is inclusive because good ideas are what shape the direction of good organizations. Too often in local governments or state governments, we become too focused on party policy and towing a party line. I’m not interested in that. I am interested in good ideas and progress. As a result, I envision a very close relationship with every city councilor and every state representative to ensure that there’s a level of comfort and a certainty that people with good ideas, no matter where they come from, will have a seat at the table.

Ballard has thrown his support behind your campaign. Has he given you any advice about how to approach the race?

Most of our conversations have been around the importance of grass-roots campaigning and getting out into the community and talking with people to really understand the issues as we craft the policies that will shape their lives for the next four or eight years.