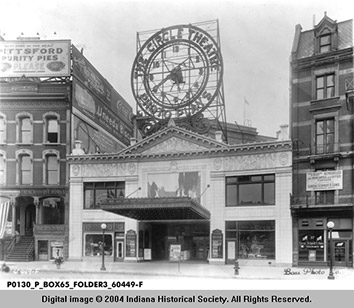 Because of its location at the center of a long-standing transportation hub, Indianapolis has served as headquarters for state and national not-for-profit, performing arts, women’s, and trade and professional organizations for nearly two centuries.

The city has always had a reputation for honoring its sons and daughters who served in the military. Construction of the Soldiers and Sailors Monument on the Circle downtown was perhaps the first representation of that laudatory public spirit.

In the late 19th century, Indianapolis had a strong chapter of the Grand Army of the Republic, the organization that catered to the needs of the white-haired veterans of the Army of the Cumberland and Army of the Potomac units that kept the union intact at Antietam, Shiloh, Chancellorsville, Perrysville, Gettysburg, Chickamauga, the Wilderness and hundreds of other battles from 1861 to 1865. The GAR, as it was known, visited Indianapolis for an encampment in 1893.

The organization selected Indianapolis for its 54th annual September encampment in 1920, 1921 and 1925. All three national encampments were organized by the Indianapolis Chamber of Commerce, the city’s largest trade and professional organization for more than a century. By that time, the GAR was rapidly losing members; 400,000 strong in 1899, it reported fewer than 90,000 in 1921.

By the 1920s, however, the city was home of the national organization founded to represent interests of the millions of U.S. veterans of World War I. Following a 1919 campaign to bring the national headquarters of the American Legion to Indianapolis, campaign organizers shifted their efforts to establishing a memorial to veterans of World War I. The city set aside the blocks between Vermont and North Street and Pennsylvania and Meridian streets for the proposed memorial, and after a nationwide search for an architect, the Cleveland firm of Walker & Weeks began designing a memorial building, auxiliary buildings, a mall and a cenotaph, a memorial specifically dedicated to the war dead. It was the second physical representation in the city of the gratitude felt for the sacrifice of others.

The city’s trade and professional organizations for more than a century have taken their cue from the Indianapolis Chamber of Commerce (now Indy Chamber), the Indiana Chamber of Commerce, the Better Business Bureau of Central Indiana, the Indiana Chapter of the National Federation of Independent Business, and the suburban chambers in the doughnut counties surrounding the Hoosier capital city. All have served as eloquent voices for their business members and promulgate and enforce standards for conducting business in the state.

Because of the city’s central location in Indiana, Indianapolis also has long hosted the state’s numerous professional organizations, including teachers, attorneys, CPAs, doctors and nurses. In the 20th century, the city also became a major center for business and professional women’s organizations, including Business Women Connect, the Indiana Chapter of the Healthcare Business Women’s Association, Delta Sigma Theta, and the Indiana Chapters of the National Association of Professional Women and the National Association of Women Business Owners.

Indianapolis has long been the center of a thriving number of fraternal organizations. Freemasonry traces its roots in Indianapolis to the mid-19th century. The Knights of Pythias, founded in 1854, had a chapter in the Hoosier capital as early as the Civil War. Indianapolis was awarded the second chapter of Kiwanis International (founded in Detroit in 1914) and was later designated the headquarters city for the fraternal organization. The opening of Scottish Rite Cathedral on the west side of Meridian Street across from War Memorial Plaza in 1929 gave the organization an architectural signature it retains to this day. Rotary, the Fraternal Order of Eagles, the Moose Lodge, the Knights of Columbus and other fraternal organizations also retain a strong presence.

Location also dictated that dozens of national fraternities and sororities made Indianapolis their home during the past half-century. The North American Intrafraternity Conference was formally organized in 1910 and has long been headquartered near the Pyramids on the northwest side. The conference, which represents interests of college fraternities and sororities, is near a number of its members in the Pyramids neighborhood.

One not-for-profit with health care roots has been a major philanthropic force for educational and community affairs in Indianapolis. Founded in 1937 by Josiah K. Lilly and his sons, and funded with stock from the pharmaceutical firm founded by Eli Lilly, Lilly Endowment has funneled hundreds of millions of dollars into its primary focus areas: community development, education and Christianity. Because of its role in helping organize and fund community foundations, Indiana has more community foundations than any other state.

A replica of the U.S.S. Kearsarge displayed in front of the Statehouse at the 1893 Encampment of the Grand Army of the Republic in Indianapolis.

Another performing arts organization with a long history in Indianapolis is the Indianapolis Symphony Orchestra. Founded in 1930 by Ferdinand Schaefer, a local music professor, the ISO hired Fabien Sevitzky as its first music director in 1937. The ISO became nationally known in the 1940s and ’50s with its symphonic recordings on RCA Victor and Capitol Records, and under Music Director Izler Solomon, the symphony embarked on national tours in the late 1950s and early 1960s.

Music Director John Nelson found the ISO a home at what’s now the Hilbert Circle Theatre, and he was succeeded by Raymond Leppard in 1987. Leppard served until 2001, and ISO’s 21st century music directors have included Mario Venzago and Krzystof Urbanski. The Indianapolis Symphonic Choir also traces its beginnings to the late 1930s.

Performing arts organizations in Indianapolis have a variety of venues to showcase performances. Clowes Memorial Hall on the campus of Butler University, and the Murat Theatre at Old National Centre downtown are two longtime favorites. The Atheneum Theatre, Phoenix Theatre and Theatre on the Square are prominent downtown venues. In recent years, first-class venues including the Palladium in Carmel, Warren Performing Arts Center and Pike Performing Arts Center have opened in suburban areas.•