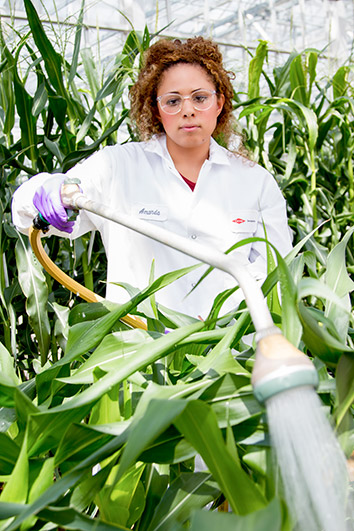 But that’s bad news for farmers, according to some farm groups and antitrust experts. They claim a combined DowDuPont would hurt farmers by raising prices on seeds and weed killers, reducing profits and retarding innovation.

They also worry it would spark other mergers of ag-industry giants, further amplifying those harmful effects.

If farm groups can get the U.S. Department of Justice or the Federal Trade Commission to agree, that could stymie plans to create an ag-products powerhouse. The fate of the deal will have a direct impact on Indianapolis, where Dow AgroSciences LLC is based and employs 1,500 workers.

“We expect regulatory and political challenges will be greatest in ag,” wrote Aleksey Yefremov, an analyst at Japanese investment bank Nomura Securities, in a Dec. 14 report to investors. He noted that, on Dec. 11, one day after Dow and DuPont announced their deal, the National Farmers Union and the National Corn Growers Association called for regulators to closely scrutinize the deal for harmful effects on competition.

Roger Johnson, president of the National Farmers Union, minced no words about the Dow-DuPont deal in an interview with IBJ.

“This proposed merger would be debilitating for competition in the marketplace,” said Johnson, who owns a 1,000-acre farm in North Dakota and is a former state ag commissioner. “Farmers are going to end up paying higher prices for fewer choices.”

But Ed Breen, CEO of Delaware-based DuPont, said the deal will lead to more choices, not fewer, because DuPont’s well-developed network of distributors will now be able to offer products of two companies, not just one.

When asked by a Wall Street analyst on Dec. 10 whether a combined DowDuPont would be required to sell off businesses in order to win regulators’ approval for the deal, he noted there is only modest overlap between Dow’s and DuPont’s businesses.

“It would be very limited where there’s product overlaps in almost all geographies. We’ve been through this, we’ve analyzed it in detail, so it would be very minor if there is any,” Breen said.

“These are highly complementary businesses,” he added, “and really it’s going to give our end consumer, our farmer, a lot of product choice here and diversity of choice, which is going to be just a real advantage from a market-share standpoint for us.”

It’s true that Dow’s and DuPont’s ag businesses have emphasized different parts of the ag industry. In 2014, Dow Agro derived $5.7 billion of its revenue from crop-protection products such as herbicides, pesticides and fungicides.

That was 78 percent of Dow Agro’s overall revenue of $7.3 billion, with the rest coming from sales of seeds and genetically engineered seed traits.

But DuPont’s business was nearly the inverse. It racked up sales of $7.7 billion in seeds—or two-thirds of its overall revenue of $11.3 billion. The other third came from sales of crop-protection products.

There are areas where a combined DowDuPont would have significant market share.

The U.S. market for corn seeds is the biggest example. In 2014, DuPont claimed 33 percent of the market, slightly behind St. Louis-based Monsanto Co., according to an analysis by Nomura Securities of data compiled by PhillipsMcDougall, a United Kingdom-based agriculture consulting firm.

But if Dow and DuPont had been combined, they would have claimed 39 percent of the corn-seed market. In the U.S. soybean-seed market, DuPont already was the leader with 34 percent, but adding in Dow would have boosted that to 37 percent.

But Diana Moss, president of the American Antitrust Institute, a think tank promoting competition, said a modest divestiture might not be enough, because the ag market is already so highly concentrated. Divestitures often fail to work out when there are so few, if any, firms that can buy a divested business and run it as competitively as the original owner would have.

“Any further merger activity in a market that’s already so concentrated is going to raise red flags from an enforcement perspective,” said Moss, a frequent critic of large corporate mergers.

Recent trends in the ag market make it even harder for new entrants to launch successful products. That’s because companies like Dow, DuPont and Monsanto have started linking genetic seed traits, the seeds themselves and herbicides so they work in concert.

For example, Dow launched a herbicide this year called Enlist. It’s effective against weeds that are resistant to Monsanto’s mega-product, Round-Up, but works only if farmers plant crops using Dow seeds. The product, now targeted by the U.S. Environmental Protection Agency, is predicted to bring Dow $1 billion in profits over its life.

Monsanto did something similar with Round-up and Round-up Ready traits in its seeds.

If the industry developed to where only two of these technology “platforms” dominated, it would be hard for any small company to bring a new kind of seed or new seed trait or new herbicide to market, because most farmers would be locked into a platform that did not work with that technology.

“That will stifle the incentive to innovate in these markets,” Moss said.

Dow and DuPont signaled that they would try to cut costs in their agricultural R&D departments, but said they would target only “duplicative” areas and would focus more on the development costs than on the innovation.

“We did not take out anything that could help these companies for growth in the future,” Breen told analysts on Dec. 10. “When I do cost cuts over the years, I always am very careful not to over-affect the person that is selling the product to the customer and the people inventing and making the product. And everything else in the middle is a little more fair game.”

Overall, Dow and DuPont said they could save $1.3 billion in their combined agriculture businesses.

Kendell Culp, who farms 2,000 acres near Rensselaer, said that if Dow and DuPont can make themselves more efficient and pass on some of those savings to farmers, farmers would, indeed, benefit.

“If that’s the goal and that’s the vision, then I think we’re going to be fine with it,” he said. “My only concern would be less competition and so higher prices. If that comes at today’s [depressed] commodity prices, that’s going to be hard to swallow.”

Those declines have hit after a decade of rapid increases in the cost of seeds, which have steadily offered new traits to increase yields.

According to annual cost analyses performed by Purdue University, the per-acre cost of corn seeds in Indiana has risen 265 percent over the past decade, from $34 to $124.

Over the same period, the revenue for an acre of corn has risen just 99 percent.

As a result, seeds now account for about 27 percent of corn farmers’ variable costs per acre, up from 17 percent a decade ago.

“A lot of farmers are looking at their balance sheets and saying, ‘Can I afford the new technology anymore? Maybe I should go back to the way I farmed 10 years ago,’” said Culp, who on Jan. 1 will become vice president of the Indiana Farm Bureau, a farmers’ trade group. “That’s never a good place to be in agriculture. We need to be looking forward.”•