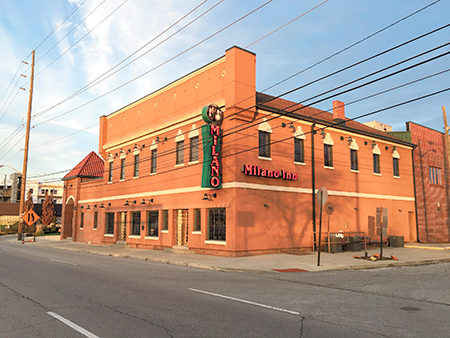 A South Bend-based real estate firm has agreed to buy the Milano Inn building and surrounding land with plans for a large redevelopment project that could include condominiums and a mix of retail and restaurant space.

Sisters Tina and Gina LaGrotte, who closed the Milano Inn at the end of last year, announced Monday morning that they have selected Holladay Properties to rehab the historic building at 231 S. College Ave. and redevelop the city block on which it sits.

Holladay doesn’t have a firm development plan in place yet but has begun talking to city and neighborhood leaders about what they envision for the property, said Dan Phair, a Holladay partner and vice president of development.

“We’re in the process of buying it and figuring out the future plans,” Phair told IBJ. “There’s been a lot of activity along Virginia Avenue, Fletcher Avenue and College. This is part of the wave of new development.”

Phair said condominiums and a mix of retail and restaurant space probably make the most sense for the property.

“Apartments are not our primary focus on the site,” he said. “We think there’s an opportunity for some for-sale [residential product].”

Phair declined to divulge how much Holladay is paying for the land. The firm hopes to begin its project by the end of the year.

To the north, apartment developer Herman & Kittle Properties Inc. is building 211 units on a 2.6-acre parcel as part of a project called The Vue. The LaGrotte sisters about two years ago sold that strip of land, at the southeast corner of College and Maryland Street, to Herman & Kittle.

The sale of the Milano Inn building and surrounding land to Holladay includes the entire block that fronts College and is bounded by South Davidson Street to the rear, Bates Street to the south and East Georgia Street to the north.

Angelo’s Grocery at 201 S. College Ave., which was started by the LaGrotte sisters’ grandfather and still operated by them, is included in the sale. Phair said it’s unclear what its future is.

Though closing the Milano Inn was a difficult decision, selecting Holladay to develop the property was not, Tina LaGrotte said in a prepared statement.

“We are confident that Holladay will improve the quality of the neighborhood and create something unique in Indianapolis,” she said. “As a resident of the neighborhood, I couldn’t be more thrilled with Holladay’s approach and initial thoughts.”

The sisters didn’t solicit bids on the property but accepted Holladay’s offer after the developer was introduced to them by a mutual acquaintance.

“We just entered the picture at a time when they already had made some decisions and started to talk to us,” Phair said. “They wanted to make sure whoever ended up with the property that that legacy would carry on.”

The Milano project would be Holladay’s first in downtown Indianapolis, although it has developed similar projects in northwest Indiana, South Bend, and Nashville, Tennessee.

Locally, Holladay has developed the 6.9-million-square-foot AmeriPlex industrial park on the west side and is building the $12.2 million Hampton Inn, with Schahet Hotels, near State Road 32 and U.S. 31 in Westfield. It’s expected to open in April.

The LaGrotte sisters closed the iconic Milano Inn on Dec. 31, ending an 82-year run that began in 1934 under previous ownership. The two had been involved in the restaurant since their father Leo LaGrotte bought it in 1980 and said in December that it was time to move on with the next chapter of their lives.

The Milano Inn was founded in 1934 by Mary and Joe Modaffari, who operated it until their deaths in the late 1970s. Leo LaGrotte purchased the restaurant from Modaffari family members who were struggling to keep the business going.