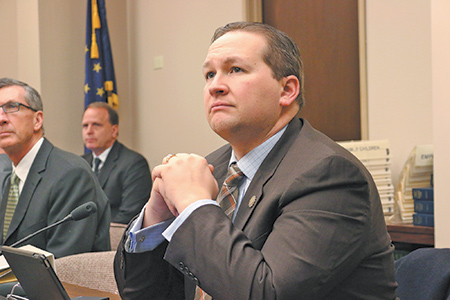 The Indiana Chamber of Commerce, organized labor groups and a bipartisan group of lawmakers have for years pushed the Indiana Legislature to join more than half the nation’s states in implementing a work-sharing program.

But the bill has never gained much traction in the Legislature. This year, it won’t even receive a hearing—to the frustration of its supporters.

“This seems to be an issue that loses momentum even though it hasn’t lost the support,” said Andrew Bradley, a policy analyst with the Indiana Institute for Working Families. “Something is killing this. When you ask about it, it seems to be a moving target.”

House Speaker Brian Bosma said legislators have received “some mixed signals” from first the Pence administration and now the Holcomb administration on the concept.

“I think there’s some question whether the Department of Workforce Development thinks it’s a positive for the state,” Bosma told IBJ. “And to the best of my knowledge, [legislators are] looking for advice from the administration in that regard.”

Gov. Eric Holcomb’s spokeswoman, Stephanie Wilson, told IBJ the idea is “not among the governor’s legislative priorities this session.”

DWD Commissioner Steve Braun did not respond to IBJ’s questions about his stance on the proposal, instead sending a non-specific statement saying the DWD works with the General Assembly on many issues.

In 2015, a DWD spokesman told IBJ Braun was analyzing data and still formulating an opinion on the program. But this month, his spokesman wouldn’t say whether he had arrived at an opinion.

Inside the Statehouse, Rep. Heath VanNatter, R-Kokomo, chairman of the employer, labor and pensions committee, said he decided not to give the bill a hearing this year after questions arose about the costs and benefits of the program. The measure was authored by Rep. Martin Carbaugh, R-Fort Wayne.

“I’ve spent more time on the issue than probably anything else this session,” VanNatter said. “I like the concept. I’m not saying I won’t hear it next year.”

One complication is that the Indiana Manufacturers Association—a powerful business lobbying group that is aligned with the Indiana Chamber on several issues—is not entirely on board.

“They’re the ones who would probably use this program more than anybody,” VanNatter said.

Indiana Chamber Vice President Mike Ripley said his group has “done all we can to get it moved.”

“If the IMA and the chamber were on the same page, I think it would get a hearing,” Ripley said.

But the IMA’s policy director, Stephanie Wells, said she doesn’t think the IMA is holding up the bill, even though the group has concerns about the proposal.

One is whether the Unemployment Trust Fund—from which payments to out-of-work Hoosiers are made—is solvent enough to take on the burden of the proposed program, Wells said.

“We tell everybody, and we said in committee [in previous years], that we are supportive of the concept,” Wells said. “We need to find an alternative funding source. If there was another funding mechanism that employers who will utilize it would fund it outside of the UI system, we think that would be a good solution.”

The trust fund essentially went bankrupt during the Great Recession when the taxes businesses paid into the system didn’t keep up with the payments going out to unemployed workers. Indiana borrowed some $2 billion from the U.S. Department of Labor to keep the system afloat.

In 2011, the Legislature increased employer taxes and trimmed benefits to help right the fund, and at the end of 2015, the state paid off its federal loans.

The balance of the fund is currently about $53 million.

“We just got the feds paid off and we’re just now building up a balance again,” VanNatter said. “We’re afraid of what [work sharing] could do to that fund.”

But the nonpartisan Legislative Services Agency said the program “should not impact the unemployment insurance trust fund.”

“A federal evaluation of these programs demonstrates only negligible impact to state trust funds as losses are typically offset by appropriately adjusted employer experience rates,” according to an LSA report. “It is possible that negative impacts may be realized if employer participation in a program of this kind increases dramatically at the same time that [state unemployment tax] increases and adjustments are constrained.”

Another concern, VanNatter said, is the cost of administering the program. According to LSA, the Department of Workforce Development estimates $2.5 million in first-year implementation costs and $1 million each year after that to manage it.

Carbaugh said concerns about the program’s costs are “valid,” especially if it’s used primarily during downturns.

A 2016 Department of Labor report showed usage of the program across participating states peaked in 2009 at the height of the Great Recession. That year, 288,618 people received their first “short-term compensation” payments. In 2014, just 53,565 people nationwide used the program for the first time.

Carbaugh said he hoped the opposing sides could come together this year to approve the program while the economy is still strong.

“Let’s get this in place before a recession hits so that, when it hits—not if, maybe we can ease in and ease out of it with a program like this,” Carbaugh said. “But we’ve got to get everybody on board and sell that the cost is worth it.

“One thing I’ve learned here is, you never say never on anything.”•