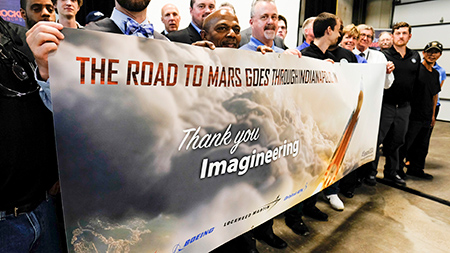 In its quest to send people to Mars, NASA’s road to the Red Planet passes straight through central Indiana.

The federal agency is spending billions of dollars developing a next-generation rocket that it plans to test launch in 2019, with the goal of sending people to Mars around 2030. More than 20 companies in Indiana—about half of them in the Indianapolis area—are contributing to the effort, which NASA calls the Journey to Mars.

At the highest level, NASA has five prime contractors responsible for the project, which encompasses three main areas: the Orion spacecraft, which is the capsule that will house the astronauts; the Space Launch System rocket, or SLS; and the launch pad and other ground infrastructure needed for launch.

But those contractors have a lot of help. They’re supported by more than 1,100 companies in all 50 states, plus Europe.

According to a NASA report released in April, the agency has invested more than $15 billion since 2012 on developing Orion, SLS and ground systems. NASA’s budget projections for sending humans to Mars exceed $210 billion by 2033.

The Orion capsule is small, with space for only four astronauts. Yet it’s exceedingly complex—it will be capable of sustaining a crew for up to 1,000 days in space, and it is made up of 250,000 parts, Price said.

Only about one-third of the work on Orion/SLS is being done in-house by one of the prime contractors. The rest is handled by the support network, including many small businesses with niche capabilities.

“These small businesses can do things that we can’t do as a big company,” Price said.

One of those specialists is South Bend-based Imagineering Finishing Technologies, which has about 125 workers at its headquarters and another 30 at an Indianapolis outpost on Emerson Avenue near East 30th Street.

Imagineering specializes in metal finishing. At both of its facilities, Imagineering receives metal parts made at other suppliers for both the Orion and SLS, then surface-treats the parts and inspects them for manufacturing errors.

About 25 percent of the work Imagineering handles at its Indianapolis facility is NASA-related, company CEO Jim Hammer said.

To acknowledge Hoosier companies’ contributions, a group of representatives from NASA and its prime contractors paid a three-day visit to Indiana Sept. 19-21. The visit included stops at Imagineering’s Indianapolis and South Bend facilities, as well as at Indianapolis-based Major Tool and Machine Inc. Major Tool makes components for both Orion and SLS, including rocket engine parts.

In addition to the company visits, the group participated in a program in Indianapolis to honor all the state’s NASA suppliers and visited Purdue Polytechnic High School in downtown Indianapolis.

“It’s all in the name of raising awareness and excitement about this,” said Ryan Metzing, executive director of the Indiana Aerospace and Defense Council. The council is a project of Conexus Indiana, an Indianapolis-based group that works to strengthen the state’s advanced manufacturing and logistics industries.

NASA is racing to meet a demanding timeline. In 2019, it hopes to launch its first test flight, an unmanned lap around the moon to make sure everything works. Then, no earlier than 2021, Orion/SLS wants to send a crew beyond the moon, farther into space than people have ever traveled.

After that, NASA hopes to build a lunar gateway—infrastructure that would serve as a point of departure for staging missions to Mars. If all goes according to schedule, NASA says, it could send people to Mars around 2030.

Visits like the one to Indiana help connect NASA’s vast supplier network to the bigger mission at hand, said Tracy McMahan, a spokeswoman for NASA’s Marshall Space Flight Center in Huntsville, Alabama.

“A lot of times, people are doing their job every day and they don’t really know about the big picture,” McMahan said. “There’s nothing like thanking someone personally, face to face.”

Former astronaut Brian Duffy, who now works for Orbital ATK, was part of the Indiana visit.

“Your legacy will be that you built the hardware that allows us to go do that.”

If the Journey to Mars program achieves its goals, it could help raise the profile of the nation’s space program. NASA is no longer in the public eye like it was in the past, when the moon landing and later space shuttle flights captured the nation’s imagination, said Dan DeLaurentis, a Purdue University professor of aeronautics and astronautics. He also directs the Purdue Institute for Global Security and Defense Innovation, and the Center for Integrated Systems in Aerospace.

President John F. Kennedy made the moon landing a national priority, DeLaurentis said, but presidential administrations since then have set differing priorities for NASA, which can be disruptive to long-term projects.

Purdue professors and students have been involved in NASA-related research on everything from hurricane forecasting to robotics. Purdue students also end up working at NASA and aerospace companies.

In all, 24 Purdue graduates have gone on to become astronauts, including some of the earliest and most famous—Neil Armstrong and Virgil “Gus” Grissom.

Exposure to NASA, DeLaurentis said, creates a “virtuous cycle” where Purdue students can take their knowledge and use it to innovate in the private sector.

When Purdue students interact with NASA officials on campus, he said, the students press NASA to pursue missions with long-term impact.

“The students aren’t happy with just another plant-the-flag mission,” he said.•