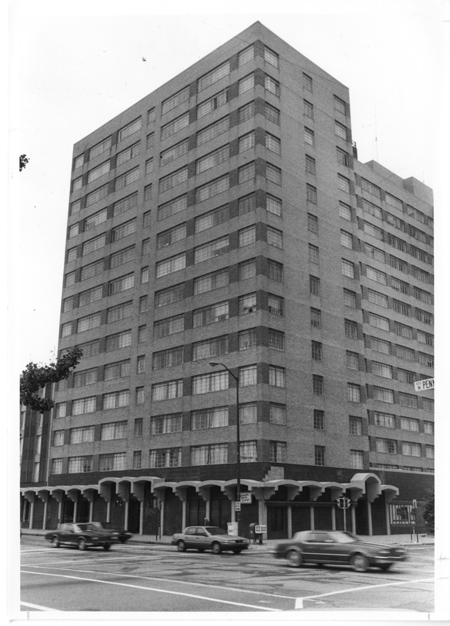 A downtown parking lot that for nearly 25 years has sat undeveloped—despite a zoning rule barring surface lots in the area—finally is poised to be built upon.

Boston-based Charles Street Investment Partners LLC has filed plans with the city to construct a $15 million, seven-story apartment-and-retail project at Pennsylvania and Vermont streets, directly south of The Residences at 429 condominium and office building.

The parking lot formerly housed the Essex Hotel, which was demolished in 1994. A legal battle between the property owner and the city followed, leading to more than two decades of inactivity at the site.

Now Charles Street is proposing to construct a 39,300-square-foot building with 165 apartments, about 2,200 square feet of retail and a 157-space parking garage.

The city’s Regional Center Hearing Examiner was set to consider the project on May 24. But Charles Street’s proposal has been continued until June 28 to give city planners more time to work with the developer on its design.

Peter Cleveland, a local attorney whose office is in the building next to the lot, is representing neighbors in the above condominiums. They don’t oppose development at the site but want to ensure the design meshes with the surroundings, he said.

“The massing, colors and materials are not appropriate,” Cleveland said. “The Regional Center guidelines are pretty specific and suggest an alternative plan be developed.”

Frank Dellaglio, a principal at Charles Street, said the company is amending its filing to satisfy city suggestions and has brought aboard Seattle-based NBBJ as its new architect.

“We are excited about the direction the project is headed in since making this change last month,” Dellaglio said in an email.

He and his team met with city planners on June 5 and had “very productive” discussions, he said.

Charles Street has the nearly one-acre lot under contract and is buying it from Cincinnati-based Chavez Properties, an affiliate of Parking Company of America.

Chavez bought the Essex in 1994 and needed to develop the site or turn it into green space to comply with a city zoning rule. The rule bars surface parking lots adjacent to the Indiana War Memorial and American Legion Mall along Meridian and Pennsylvania streets.

The city, though, agreed to a five-year extension after the owner demolished the 1950 building, which became the Essex House apartments after its glory days hosting high-profile Indianapolis visitors.

The hotel was prominent enough to be rumored as the home of The Beatles during their 1964 visit, causing fans to mob it as the Fab Four rested comfortably at the Speedway Motel, according to historicindianapolis.com.

But it also holds the distinction of being the youngest high-rise to be demolished in the city, standing only 44 years.

In 1999, with the lot still vacant, Chavez won a second five-year reprieve, as it worked to put together a deal for a high-rise condo project with local developers R.A.B. Investments and Eaton Investments. But the deal fell through in 2004.

So, the 165-space parking lot stayed, and in 2006 the owner petitioned the city’s Board of Zoning Appeals for another five-year zoning variance and a possible five-year extension after that. During a hearing in January 2007, apparently sensing a denial, Chavez amended its request to instead ask for a three-year extension.

The board voted to deny the request, and the owner filed suit in February to challenge the decision.

Marion Superior Court Judge Michael D. Keele ruled for the property owner in October 2007, noting in his decision a chronic shortage of parking in the area that the lot helped allay. He also said there were 10 similar surface lots nearby, and only one had as much landscaping as the Essex property.

After the ruling, Chavez asked the judge to grant the original request for a five-year variance with the possibility of a five-year extension. The city opposed the motion. The two sides eventually settled on a six-year extension, after which the company would need to seek a new variance.

The agreement set a new deadline of 2014, but the property has sat in limbo since without another extension.

“No code enforcement action has been taken as far as we know,” said Jeff York, a city senior planner.

Representatives of Chavez did not return calls from IBJ seeking comment on the property.

DMD Director Emily Mack is pleased to finally see progress at the site.

After more than two decades, it’s exciting to see a potentially transformative project planned for one of our city’s long-overlooked downtown properties,” she said in an email. “This future mixed-use development will not only re-establish an urban wall at this prominent intersection, but also invigorate this key node in Indianapolis’ core.”

Charles Street is proposing to use a mix of masonry brick, metal panel, phenolic wood and glass to construct the building, which is “appropriate for the location,” the Regional Center Hearing Examiner said in the case filing.

But the east and west facades create a heavy appearance with the dark materials, compared with the surrounding historic buildings that are designed with limestone or yellow brick, the hearing examiner said.

Other suggestions for the project include removing residential units along the street level and increasing the commercial space for improved public engagement.

“The residences on the first floor limit the available commercial space and will prohibit future commercial growth in a vital part of downtown Indianapolis,” the hearing examiner said.