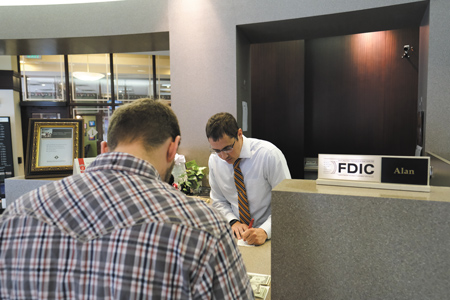 An impulsive outburst might not sound like the best inspiration for starting a business, but it’s worked out pretty well for The National Bank of Indianapolis.

The outburst came from local businessman Mickey Maurer, who was serving on another bank’s board when he announced in a fit of frustration that he would start his own bank. Maurer, who is also a shareholder in IBJ Corp., followed through on his word, partnering with his cousin—Morrie Maurer—in 1993 to launch The National Bank of Indianapolis.

And it’s done so by sticking to its original hyper-local focus and remaining independent—not the typical path for a startup bank.

“That is the exception, not the rule, for community banks,” said Mike Renninger of Carmel-based bank consulting firm Renninger & Associates LLC.

“They’ve created a very valuable franchise,” Renninger said. “And they’ve shown no propensity, as far as I can tell, of wanting to be something they’re not.”

The bank is currently worth $252.5 million, based on its appraised share price as of June 30 and the number of shares outstanding.

The bank got its start at a time of upheaval in the local banking market. Spurred by a change in Indiana banking laws several years earlier, a flood of out-of-state banks had swooped into Indianapolis to acquire local institutions, leading to a loss of local autonomy.

Local businessman Mickey Maurer was a board member at Indianapolis-based Merchants National Corp. when that institution was acquired by Ohio-based National City Corp. After the takeover, Maurer became a member of National City’s local board—and he didn’t like some of the changes National City was making.

When he heard about a small business client who had been asked to take his business elsewhere, Maurer, now 75, called a meeting with National City’s executives to get them to reconsider. They were unmoved, and in frustration Maurer quit the board on the spot. The executives did not ask him to reconsider.

“That made me even angrier, and so I blurted out, ‘I’ll start my own bank!’” Maurer recalled. “And then they started to chuckle—because it’s very difficult to start a bank.”

Launching a de novo bank—one established from scratch—is indeed difficult, said Indianapolis attorney John Tanselle, a partner at SmithAdmundsen LLC. Tanselle has served as The National Bank of Indianapolis’ outside legal counsel since the bank’s founding.

“It’s a huge undertaking. There are a lot of moving parts. For a bank, you not only are applying to a regulator to get a charter, but you’re also applying to the federal government to get deposit insurance,” Tanselle said.

Maurer pitched the idea to his cousin, Morrie Maurer, now 67, a banking executive who had recently left INB Financial Corp., parent of INB National Bank, after it was acquired by Detroit-based NBD Bancorp. They could start an intensely local bank that would fill the void left by all the recent mergers.

Morrie Maurer wasn’t initially convinced his cousin’s idea was sound. “I thought it was a very crowded market and it would be very difficult to compete against highly competitive super-regional banks.”

But after thinking it over, Morrie Maurer began to see that his cousin’s idea might work. “When I thought about his track record I thought, ‘Yeah, he’s probably right.’”

So the two set out to develop a business plan, attract investors and recruit employees.

It was the right approach at the right time, said retired investment banker John Reed, who moved to Indianapolis when state banking laws changed in 1985 and helped orchestrate more than 100 bank mergers.

At the end of 1984, Reed said, Indiana was home to 376 independent banking organizations. By the early 1990s, acquisitions had reduced that number by more than half.

“A lot of small and medium-sized businesses felt disenfranchised,” Reed said. “A whole bunch of banks around the state were throwing in the towel, which left a void which The National Bank of Indianapolis and a handful of others helped fill.”

From its beginnings, the bank has emphasized its customer service as a way to win customers.

In the early days, for example, the bank established a courier service so it could serve customers who were not near a bank branch. The couriers visited clients’ workplaces on a regular schedule so that the clients could handle their banking needs without having to leave work. As The National Bank of Indianapolis built more branches, it phased out that service, Mickey Maurer said.

Another example: The bank continues to use live receptionists rather than automated systems to answer customer phone calls. “It’s more expensive, but it’s a higher level of service,” said Morrie Maurer, the bank’s president and CEO.

A look at the numbers

According to FDIC call reports, the bank’s current financial metrics are solid, though not a standout among local peers.

Consider, for example, return on assets—a common measure of profitability that reflects a bank’s net income divided by its average assets. As of June 30, The National Bank of Indianapolis’ return on assets was 1.03 percent.

High-performing banks can achieve returns on assets of 1.25 percent or higher, Renninger said. As a point of comparison: Warsaw-based Lake City Bank, which has $4.8 billion in assets and whose footprint includes several Indianapolis-area branches, had a 1.51 percent return on assets as of June 30.

But National Bank of Indianapolis says there are good reasons why it hasn’t had higher return on assets. 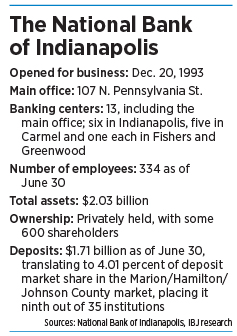 For one thing, Mickey Maurer said, the bank is conservative in its operations. That means it avoids practices that carry more risk but that also could yield higher returns. Another factor: The bank’s growth over the years means it’s had to spend money to keep up with that growth, which increases its expenses and thus reduces net income.

Efficiency ratios are another key banking metric that reflects how much a bank must spend to earn $1 in revenue. The lower the percentage, the more efficiently the bank operates. Highly profitable banks generally have efficiency ratios of 60 percent or lower, Renninger said.

The National Bank of Indianapolis’ efficiency ratio is currently 65.77 percent, down from 69.51 percent in 2014.

“They generate a lot of expense to generate their earnings, and in part that’s because they have a lot of brick and mortar,” Renninger said.

Traveling its own path

But in other regards, the bank’s performance is noteworthy.

The price of stock, which is privately traded, has appreciated strongly over the years, outpacing the S&P 500 stock index.

That’s despite the bank’s decision to reinvest profits into the company, rather than paying a dividend.

“The bank continues to grow, and we made the decision to redeploy the capital to support our growth,” Morrie Maurer said. 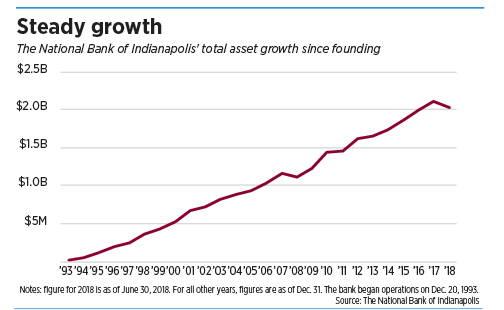 The decision not to pay dividends also carries tax advantages for shareholders, Morrie Maurer said. Dividends are taxed as income, but money made from stock sales is subject to capital gains tax—which is more advantageous to shareholders in high tax brackets.

Because the stock is not publicly traded, investors who want to cash out can sell their shares directly to the bank for the stock’s current appraised value.

The National Bank of Indianapolis' conservative operating philosophy served it well during the Great Recession. It hadn’t made any subprime mortgages and held no derivatives or credit swaps—the type of financial practices that landed so many other financial institutions in trouble.

The bank had some quarterly losses during that time, but it continued to post full-year profits. It never took federal bailout money.

“I’ve always been a conservative banker, and that’s when it really paid off,” Morrie Maurer said.

In its quarterly letter to shareholders in November 2008, the bank acknowledged the uncertainty of the current financial crisis while assuring its investors that “The National Bank of Indianapolis has remained as solid as a block of Indiana limestone.”

In fact, the bank picked up both loans and deposits during that period because “we ended up being perceived as a safe haven,” Morrie Maurer said.

The bank’s growth through the years has all been organic—not through acquisition. That’s by design, Morrie Maurer said, in part because The National Bank of Indianapolis, with its local focus, hasn’t seen another bank it thought would be a good acquisition target. “We didn’t see a strategic fit.”

Another of the bank’s distinguishing features is that it has remained independent.

De Novo banks are attractive acquisition targets for banks looking to enter a new market, Tanselle said. In part, that’s because they tend to be smaller institutions that offer a manageable way for acquirers to get their feet wet in a new territory.

Being acquired can also give a startup bank’s investors a way to cash out, Renninger said.

The strength of the Indianapolis market, and of the bank itself, would be positives should the bank ever decide to be acquired, Renninger said. “There would be a ton of interested purchasers. A ton.”

The bank, however, is not interested in a sale.

“We have no plans to sell the bank, and we never did,” Mickey Maurer said. “We want to remain an independent bank for central Indiana.”

Morrie Maurer agreed, adding that the bank is well-positioned to remain independent. “Most banks sell for one of three reasons: They can’t compete, they lack management succession or they’re unable to generate shareholder returns. We have all three covered, and this bank was built to stand the test of time.”

Morrie Maurer declined to give details on the bank’s succession plans other than to say that the plan covers the entire bank—not just top management. “We have a deep bench.”

For its part, The National Bank of Indianapolis says it sees plenty of opportunities ahead within its existing footprint of Marion, Johnson and Hamilton counties.

“We want to deal with local people and local projects,” Mickey Maurer said. “We are quite busy sticking to that mission. We still grow, and we still add customers all the time. So we don’t really need to jump out of our central Indiana core.”

“If Indianapolis continues to grow, they could easily continue to grow,” he said. “It kind of depends on the local economy, and the people who want to work for them.”

Al Smith, who serves as Indiana chairman for J.P. Morgan Chase & Co. and has spent most of his 54-year banking career in Indianapolis, characterized the relationship between Chase and The National Bank of Indianapolis as “a friendly competition.”

As a global financial institution, Smith said, Chase can offer a wider array of services than can a small bank. On the other hand, Smith acknowledged, The National Bank of Indianapolis can offer personalized services on a level that larger banks cannot.