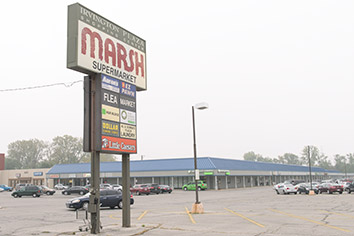 An out-of-town real estate advisory panel that spent last week in Irvington consulting with dozens of people has suggested that two deteriorating neighborhood properties could be revitalized through new mixed-use and recreational developments.

But it hasn't spoken with the owners of the properties in question.

Hired by the city of Indianapolis for $135,000, the Urban Land Institute panel offered suggestions for the Irvington Plaza retail center and the former Ford Visteon industrial site, each of which have declined over recent years.

Those ideas were formulated following extensive discussions with more than 65 area stakeholders and city officials, although the owners of the sites were not among them.

Alan Razak, who led the advisory panel for ULI, said none of the property owners were contacted for the study, saying it “wasn’t the charge of the panel” to understand their ideas for the property.

“The idea is not so much what the property owners want to do, but what we—from an urban design and an Indianapolis, regional standpoint—thought was the best mix of uses for the site,” he said.

Razak, principal of Philadelphia-based real estate development firm AthenianRazak, said he understands “it might look a little odd we didn’t talk to existing property owners,” but noted the panel stood by its decision.

The pitch for the plaza site, located in the 6200 block of East Washington Street, includes a $110 million mixed-use development with a public green space, pavilion, community arts center, housing and commercial uses across 28 acres.

The housing would be split between single-family townhomes and loft-style apartments above first-floor retail space.

The panel suggested converting the plaza's Dairy Queen into a pavilion with indoor and outdoor seating. It noted the public space surrounding the pavilion could be used year-round, including for ice skating in the winter.

Eric Becker, a Florida resident who owns Irvington Plaza, said he was not contacted by the panel or the city, and learned of the idea to redevelop the plaza through media reports.

He said that while he is open to discussions about the future of the site—he’s willing to sell the land, but didn’t say for how much—he was disappointed, but unsurprised, he wasn’t involved in the process.

“I believe that somebody should have contacted me and apprised me of what they were doing,” he said. “They can do whatever they want. I control the property, so right now they’re negotiating with themselves, basically.”

City spokeswoman Andrea Watts confirmed the panel “did not engage” Becker, and said it was the group’s decision not to do so. City officials have classified the study of Irvington as a “preliminary exploration” of options.

Becker said he has done “everything possible” to keep the dilapidated plaza afloat, but conceded any redevelopment of the area would likely mean the demolition of the property in its entirety.

He said it might be difficult to find a developer to take on such a project, given the costs involved, but said he was willing to have “serious conversations.”

“It’s too hard to develop a site like that unless you have a company with deep pockets that knows exactly what it wants to do,” he said.

The 137,000-square-foot retail center is leased through Midland Atlantic Properties, but in recent years has lost several big tenants, including anchor Marsh Supermarket in 2017.

Margaret Lawrence Banning, executive director of the Irvington Development Organization, said she does not believe Becker’s input would have made a difference in the panel’s recommendations.

Banning said Becker will ultimately have to sell the land if it is to be redeveloped, but said longstanding issues with the plaza seem to be reaching a boiling point in the Irvington area.

“There’s a frustration on the part of the neighborhood that this sits in the middle of the neighborhood and nothing is being done with it,” she said, pointing to the loss of Marsh, code violations and the condemning of an Irvington Plaza building as hot-button issues for neighbors.

Irvington Plaza was built in 1952 and has been in decline since the 1980s, with fewer than a dozen tenants still occupying space.

The Ford Visteon site about a half-mile southeast of Irvington Plaza at 6900 English Ave, also received a recommendation from the ULI panel. The group suggested that a variety of recreational sports fields could sit on the site, including football, softball and baseball, soccer and basketball facilities.

The plant at one time employed 2,200 people, but closed permanently in late 2011. Ford Motor Co. still owns the site, but it hasn’t made any moves to seek redevelopment opportunities.

ULI’s panel suggested the city could partner with a private developer on each project, financing the public portion through bonds and land-banking.

The group also indicated certain commercial and housing elements of the Irvington project could be watered down or removed to save money.

Emily Mack, director of the city’s Department of Metropolitan Development, said she was enthused by the advisory panel’s recommendations but noted it is “too early” to know whether the city could move forward with the proposed projects.

“This is not a detailed development plan; it’s conceptual (and) high-level,” she said. “But I think it serves as a starting point and provides a framework for us to be able to look at the redevelopment" of the sites.

As for the plaza redevelopment, she said such a project would likely be rolled out in phases over “several years” if it moved forward.

Mack noted several developers were among more than 100 who attended the panel's presentation on findings on Friday and that they would be part of the redevelopment process. The process would also require, at least in some capacity, involvement of the owners of each property.

The panel also stressed a need for walkability and public transit as important factors in any improvements to the Irvington Plaza site, noting that a stop for IndyGo’s Blue Line could serve as a gateway to the rest of the development.

According to “conservative estimates” by the panel, a project like the one ULI suggested would cost about $110 million to develop—including land acquisition—and could generate about $1.2 million per year in tax revenue.

ULI is expected to provide a full report of the advisory panel’s recommendations in the coming months. Mack said she doesn't expect much movement on the proposals until the report is finalized.