Home » Maggie Phelps: Being an influencer is about more than position 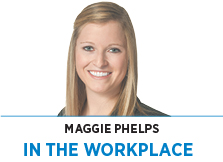 Who is an influencer? When I hear that word, I think of online accounts with millions of followers—the people all over the world with a blue checkmark on their Twitter accounts. Local influencers might not have the blue checkmark, but we see them everywhere. They’re frequent panelists and guest speakers at business networking events, they’ve self-published a book, and they’re featured in the “Who’s Who” lists published every year.

But influence isn’t something reserved for Twitter leaders, authors and public speakers. It’s something we all see and use every day. Influence exists at all levels.

In the business world, when you’re not in a position of leadership, it’s easy to feel powerless to the influencers above you. It can feel stifling and unnerving to feel the effect of changes but have no voice in the decisions that lead to them. It can be frustrating to have ideas that fall on deaf ears or come up with solutions that aren’t considered. When enough decisions are made for you rather than with you, it’s easy to throw up your arms and decide to just “stay in your lane.”

Other times, we need to accomplish something specific, to achieve a goal or complete a project, but barriers keep getting in the way—hierarchy, office politics, an unconvinced coworker, etc. We find ourselves saying, “If only [insert name of colleague] would stop doing X, we could finally do Y.”

I asked some friends of mine, also young professionals, for examples of times they needed to influence a change, but struggled to do so. One friend related the question to her work with clients. In her job, when the client says jump, you jump. And yet, there are many times she knows, based on her experience, that some of what they ask for is not only against their best interests but sometimes is outright wrong. And they don’t want to hear it.

Another friend described his boss as being inconsistent and overbearing. He finds it difficult to know when to seek feedback and when not to. He struggles with moving forward with his own instincts rather than asking for permission.

My guess is, we can all relate to these stories in some way. Most of us have faced similar situations that have challenged us to decide when to push back and when to back down.

I asked my friends how they handled their situations and what they learned along the way. The first friend said she’s found success by coming into a client conversation with the answer she wanted to hear already in her mind. She says, “I let it be their idea in the end.”

My other friend says he’s gotten in the habit of anticipating his boss’s feedback before he presents something to her. That way, he’s prepared the rationale for his decisions before she asks a question. He also smartly pointed out that he recognizes a need to prioritize which decisions he cares most about, so he can use his limited power more wisely.

After hearing these stories and others from my fellow young professionals, here’s what I’ve gathered.

People who do this well, do it genuinely. The best influencers build relationships because they want to, not because they “should.” It’s not about landing the next promotion or climbing the ladder. If all you’re interested in is what someone else can do for you, you’re missing the point. Relationships built on self-interest are transactional. They work for a while, but soon that influence runs out and the value in the relationship disappears.

We can’t win all the fights; we have to pick our battles. We should think of our influence as a reserve. It’s not something to throw around or overuse. It’s a powerful asset that should be saved and used strategically.

Becoming an influencer takes extra time and effort. You’re not getting paid to “build your influence.” You’re getting paid to get results. In order to get stellar results, though, we must be willing to put in some extra effort so that, when our battle comes, we already have what we need to fight it.

Good influencers allow others to have a voice and listen more than they speak. They guide rather than tell. They recognize that sometimes the process is more important than the outcome. So in the end, if achieving the goal takes twice as long to get there, it was time well spent.

We all use influence every day, consciously or not, to sway someone else to act or think a certain way. When we don’t have positional authority, or the ability to say “because I said so,” we must find other ways to influence. It’s hard to assert power when it seems like or feels like you have none. But we often have more power, or at least more influence, than we realize.•