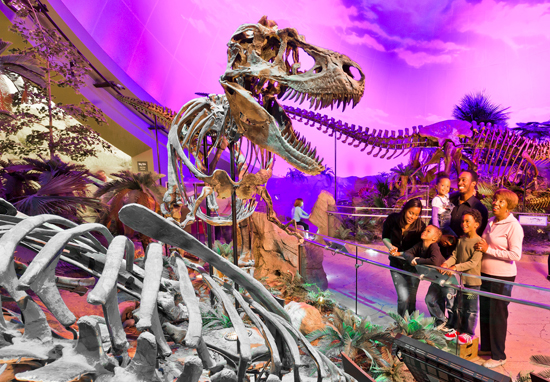 The Children’s Museum of Indianapolis is heading a huge research project into the Jurassic period that will include excavation of fossil-rich land in Wyoming and a major redesign of the museum’s dinosaur exhibit with two massive skeletons discovered on the site.

The museum plans to invest $27.5 million in the project, which has been dubbed Mission Jurassic. That figure will include costs of the expedition, recovering the fossils and then adding or reconfiguring exhibits in the museum's "Dinosphere" space, which currently focuses on the later Cretaceous period.

The museum plans to include an 80-foot-long brachiosaur and 90-foot-long diplodocid, composed largely of fossils found on the Wyoming site, according to Jennifer Pace Robinson, vice president for experience development and family learning. The remade space is expected to open in 2022.

The brachiosaur and diplodocid will be positioned adjacent to the descending ramp at the entrance to Dinosphere, emphasizing their long necks and overall length, Robinson said.

The museum already has raised more than $9 million for the project. On Monday, it kicked off a fundraising campaign for the balance of the $27.5 million.

The Mission Jurassic project will bring together more than 100 scientists from three countries to study fossilized bones, tracks and plants in northern Wyoming in an area known as the Morrison Formation. A specific stretch of the area called "The Jurassic Mile" already has yielded mammoth finds, including segments of the brachiosaur and diplodocid.

The museum, which has a 20-year lease to work on the property, is partnering in the project with The Natural History Museum (located in London), the Naturalis Biodiversity Center (Leiden, Netherlands) and the University of Manchester (Manchester, England).Tthe partner organizations are covering.many of their own expenses, while the Children's Museum assumes its owns costs and the expenses of leading the project.

Specimens from the fossil remains, including plant and marine life, will form the basis of the redesigned “Dinosphere." Fossils discovered at the Wyoming site also might be shared with the Natural History Museum and the Naturalis Biodiversity Center for possible display and/or traveling exhibitions.

“We are bringing together an extraordinary international team for the first time that will critically analyze portions of the Morrison Formation in new ways,” Jeffrey Patchen, CEO of The Children’s Museum of Indianapolis, said in a media release.

“This project reflects a natural synergy between three world-renowned museums, their research scientists and highly-respected research universities, each providing unique elements to complete one of the most interesting chapters in the evolution of Earth,” Patchen said.

The Children's Museum already has secured a $9 million grant for the project from the Indianapolis-based Lilly Endowment. The museum also credits "an extraordinary lead gift" from honorary trustee Susie Sogard and her husband, Jack Sogard. It still needs to raise about $18 million.

The project also calls for contributions by the SLAC National Accelerator Laboratory in Menlo Park, California, and Environmental Systems Research Inc. SLAC uses x-rays to determine the biological and elemental contents of fossils.