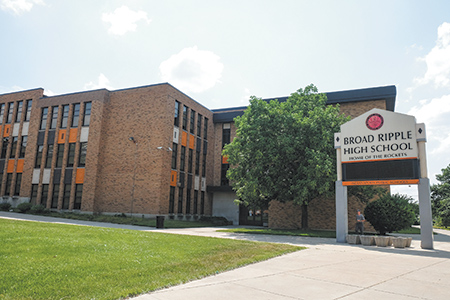 Indianapolis Public Schools offered a comprehensive analysis Tuesday, showing strong demand for housing, retail and office development on the 16-acre site of the closed Broad Ripple High School. But before the district can sell the property on the open market—instead of offering it up to a charter school — it needs the support of state lawmakers.

The future of the Broad Ripple campus has been in limbo for more than a year. That’s when the IPS board voted to close that high school and two others because of low district enrollment. The building, which is situated in a thriving and rapidly developing area, is one of the district’s most valuable assets, and leaders see it as a potential source of revenue for the cash-strapped school system.

At the time it closed the schools, IPS estimated the value of Broad Ripple at $6 million to $8 million, but a district official said that amount it is based on old analysis and it could fetch more.

The district’s options for selling the property, however, are limited by a state law that requires school districts to make vacant buildings available to charter schools for $1. In order to sell the building to a private buyer, the district would need legislators to amend that law.

“Part what we’re doing this evening is trying to demonstrate that there is a tremendous market for this property,” said Joe Gramelspacher, the district’s director of special projects. “But we are constrained, and this community is constrained by existing law.”

An IPS-commissioned study by Chicago-based SB Friedman Development Advisors found the Broad Ripple submarket could absorb extensive development at the 16-acre site, with the group laying out the amount of development in each category that could be absorbed.

The school district presented SB Friedman’s findings to a gathering of more than 250 people at the Indianapolis Arts Center on Tuesday night, as part of an initial step toward marketing the property for sale.

The findings include a buffet of options that range from single-family housing to tens of thousands of square feet of office and retail space, though developers would likely have to pick-and-choose which parts would be best-suited to reshape the site. The researchers said the submarket could handle:

— 80,000 square feet of office space, with moderate potential for absorption in the market;

— 30,000 square feet of retail space, with high potential for absorption;

Gramelspacher said alumni and members of the community have expressed interest in a continued scholastic use at the high school site, but seemed receptive to other uses for the property.

“There's a supportable market demand for, all five different classes of development that SB Friedman analyzed,” he said.

Gramelspacher said “a scholastic use could be one of many on the site,” potentially combining it with other elements to give Broad Ripple its most significant mixed-use development “in quite some time.”

A bill making its way through the state legislature would change the $1 law—potentially giving the district an easier route to selling the property, but one in which charter schools would still be able to use the building.

In buildings exceeding 250,000 square feet, such as Broad Ripple, the bill would require charter schools that want to lease or purchase the property to show they expect to occupy at least half of the building capacity and are financially able to support its operations. In the case that a large school is sold, a charter school would be able to lease space there at half the market rate. The law would also shorten the period in which buildings must be available to charter schools before they are put on the market.

IPS leaders have been in a protracted battle over the future of Broad Ripple since the school closed last year. Purdue Polytechnic High School, a charter school backed by former-governor Mitch Daniels, informally expressed interest in leasing the property in partnership with another charter network. When the district did not engage with the schools, instead pursuing a months-long public process to find another use for the property, it inspired frustration among some state lawmakers.

For a time, it appeared that Purdue leaders were no longer interested in the property. But the charter announced recently they will open a campus in a temporary location at the Broad Ripple neighborhood next school year, and many nearby residents are pushing for the school to stay there permanently. Some neighbors have vocally opposed using the property for housing and other commercial development, instead favoring an educational or cultural use.

Colleen Fanning, a city council member and the executive director of Broad Ripple Village Association, said that the site could be more than merely a private mixed-use development. She suggested it could house a school, a farmers market, and serve other communal purposes.

“I just want the process to get started, and I want the community’s input to be taken into account so we can get the process of rezoning and redevelopment started,” Fanning said. “It’s frustrating to me to see this amazing opportunity before us and to not be able to move with that in a timely manner.”

Last year, IPS released a request for proposals from not-for-profits interested in leasing some or all of the property, including charter schools. It received four proposals but none of them were viable, according to Gramelspacher.

Gramelspacher confirmed a proposal made by Indy Eleven team owner Ersal Ozdemir to buy the high school site for a mixed-use development—including a 20,000-seat soccer stadium—was not considered as part of the study, which began before the letter was sent to IPS in November.

“That letter didn’t exist when we commissioned the study,” Gramelspacher said. “They were looking specifically at those five product categories. By no means does that preclude a developer coming forward through a bid sale process and saying, ‘Hey, we want to build a soccer stadium.’

"But they did not look specifically at whether a soccer stadium is a viable economic development on the site.”

At the same time the district is lobbying lawmakers to change the rules governing the sale of school buildings generally, it is also soliciting feedback from the community about the future use of this building in particular. At the meeting Tuesday, it sought input from residents on the use of the site, and it has posted a survey on its website.

Melissa Wooton, a neighbor whose daughter attends fourth grade in the district, said that while she wasn’t won over by options presented Tuesday, she found the conversation to be constructive.

“I would like to see some more emphasis on cultural possibilities, see if there are some ways that we can also put some of the educational wishes of the community in there,” she said.

Carol Gartland, who has lived in the community for 37 years, said she favored housing and other commercial development in the property, noting: “I’d like to see it redeveloped into something that’s going to generate tax revenue so that the surrounding taxes don’t go up.”