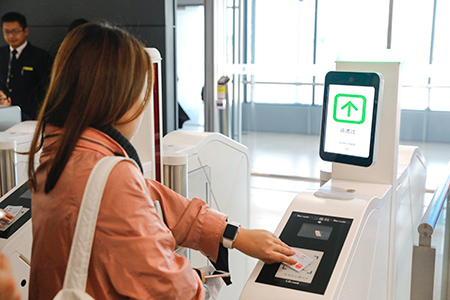 The global travel industry is looking to replace your paper tickets and security documents with your biometric data in an effort to ease gridlock.

The International Civil Aviation Organization, the U.N.’s aviation body, met in June in Montreal to discuss ways to bridge the gulf between physical and digital travel documents.

At least 53 biometric systems are used by the industry for everything from airline boarding to hotel check-in, according to the World Travel & Tourism Council. Each is typically unique to a particular venue. British Airways’ boarding gates in New York, Los Angeles, London and Orlando, for instance, use facial recognition, while Clear, a New York-based private security screening company, uses iris and fingerprint scans to move passengers through security checks. The current lack of global standards frustrates achievement of a seamless journey from airport curb to destination city.

“Right now, it’s very fragmented,” said Gloria Guevara, the council’s president and CEO. “We need to make sure that there is some interoperability among these different models.”

Reducing travel friction and increasing security are critical for the industry, which is expecting passenger growth from 4.6 billion this year to 8.2 billion in 2037—a surge that current methods will be unable to handle, Guevara said.

Beyond biometric security measures, airlines are working on new data standards for traveler records, called One ID, to “liberate the industry from a century of accumulated legacies,” said Alexandre de Juniac, CEO of the airlines’ global trade group, the International Air Transport Association.

“With One ID, passengers will no longer be subject to repetitive document checks from check-in to the departure gate,” de Juniac said while addressing a crowd in Athens at a symposium on aviation data. “Air travelers have told us that they are willing to share personal information if it removes some of the hassle from air travel, as long as that information is kept secure and not misused.”

Passengers have, in the past, expressed concerns about their privacy when asked to share biometric data. This summer, the Privacy and Civil Liberties Oversight Board, an independent agency in the U.S. government’s executive branch, said it would review benefits and privacy concerns arising from biometric tech use in aviation.

Through a spokesperson, the agency declined to comment on the issue but noted it’s at an early stage of its research.

For biometric traveling to gain acceptance, it will need to allow people to opt for a “single-journey token” for personal data that would be saved and used for a single trip, Guevara said. “When you hear [passenger privacy] concerns, that’s because they don’t see the benefit,” she said.

In June, Delta Air Lines said it would expand facial-recognition boarding for international flights at 49 gates at its Atlanta, Minneapolis and Salt Lake City hubs. The carrier has been using the tech since last fall in Atlanta’s Terminal F and claims 72% of surveyed passengers prefer facial recognition to standard boarding.

Delta and JetBlue Airways Corp. began experimenting with biometric data two years ago; American Airlines Group Inc. started tests with such boarding in Los Angeles in December. British Airways says more than 250,000 customers “have experienced a glimpse of the journey of the future” by using their face to board at three U.S. airports and its London Heathrow base over the past 18 months.

Later this year, some airports and carriers will begin tests on the next step of this digital evolution: a complete travel experience from curb to destination, involving all travel documents and security screenings. Routes planned include London-Dallas, Amsterdam-Aruba and Dubai-Sydney, according to the World Travel & Tourism Council.•