Home » With pups and personal service, Trust Hardware invests in brick and mortar 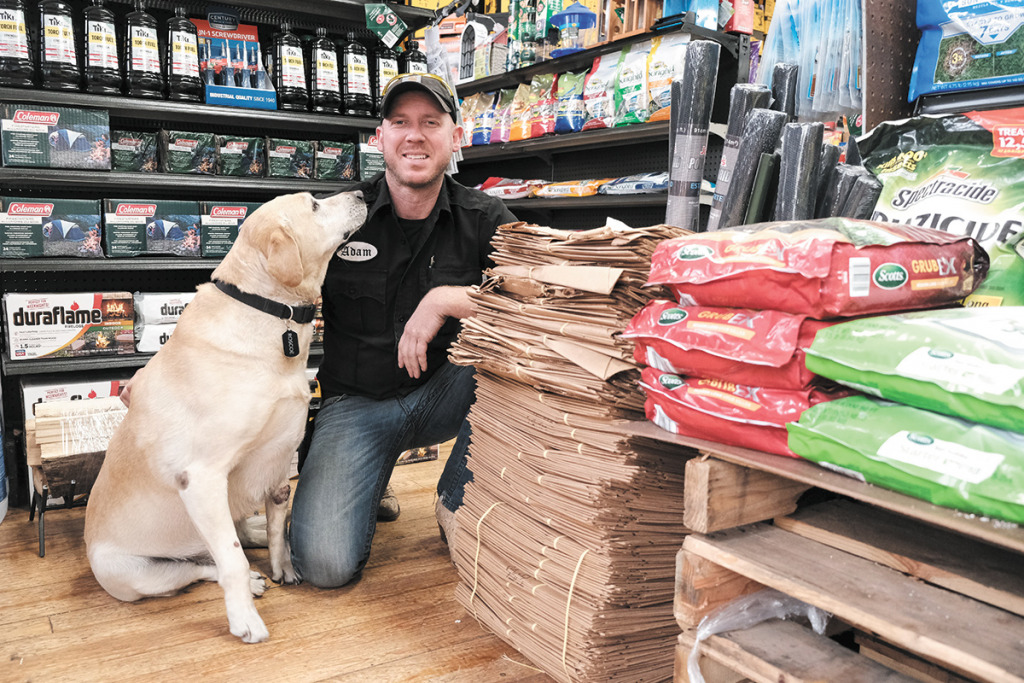 In a year in which the pandemic has shifted more and more retail activity online, Indianapolis-based Trust Hardware has found success by embracing a brick-and-mortar approach.

The company’s three stores are open 24/7. Each has a resident dog. You can also pick up everything from power tools to local honey to live bait. What you can’t do, at least for now, is order online. If you need plumbing supplies, a wheelbarrow or mulch, you’ll have to visit the store.

It’s all part of owner Adam Taylor’s strategy of building what he calls an “Amazon-proof” business. “You need things that are completely unique and different, that you can’t replicate online.”

It’s a strategy that seems to be working. Taylor, 38, opened his first Trust Hardware in 2012 along Pendleton Pike in Lawrence. His second store, at East 71st Street and Binford Boulevard, opened in October. His newest store opened this month at 911 Massachusetts Ave., right across from the new Bottleworks District development.

In 2019, Trust Hardware brought in $350,000 in revenue. Last year, that figure ballooned to nearly $1 million. Part of the growth came from the pandemic-fueled home improvement boom, Taylor said. Part came from the opening of the 71st Street store. And part came from a dramatic rise in sales at the Pendleton Pike store, which moved down the street in the fall of 2019.

This year, Taylor said, $2 million in revenue is within reach. He also hopes to pay off the stores’ debts by the end of the summer, eliminating the amounts owed for things like store fixtures, equipment and software.

“I would love to see two or three more stores this year. I think that is a very realistic possibility,” he said.

Taylor’s retail strategy has evolved quite a bit since 2010, when he opened a store called Dollar Video.

Video-store giant Blockbuster Video had filed for bankruptcy that year, and Taylor saw an opportunity to gain a niche foothold as a small local retailer of movies and video games. That store was at 11915 Pendleton Pike, in the Oaklandon Commons shopping center.

After a couple of years, Taylor realized the video-store era was fading. “You could fight it as long as you want, but people were shifting to digital media.”

So, in 2012, he transitioned that location into a hardware store—a type of store he felt would be successful even in the digital age. At first, the store was open from 5 a.m. to midnight so he could be open a little earlier than the big home improvement stores and stay open a little later.

Sometimes, customers wandered by after closing time when Taylor was still in the store. After a few years, he decided to remain open round the clock. He picked up some new late-night customers, plus a powerful marketing hook.

Taylor expects the all-night operating model will be especially popular on Mass Ave. He’s already seen some property managers at the store during the wee hours, seeking supplies for an emergency repair at a local apartment building.

The model makes for a lot of long hours for Taylor and his staff of eight.

“Without any exaggeration, I’ve been working 100-plus-hour weeks for 10 years,” Taylor said.

Keeping up this schedule, he said, is possible because he’s never needed much sleep, and he doesn’t have a wife or children. In order to find employees willing to put in long hours, Taylor pays them all at least $34,000 a year, some considerably more. All are full-timers.

The company’s director of operations, Kevin Bates, is a former customer that Taylor hired to run the more technical aspects of the business, including its software and inventory systems.

The dogs are another way Trust Hardware can distinguish itself from the online and brick-and-mortar competition. Roscoe is featured on Trust Hardware’s website, and the puppies have already popped up on its Facebook page in the weeks since Taylor acquired them. When people stop by the store, they want to visit the dog.

Retail expert Charles Aaron Lawry, an assistant professor of consumer science at Purdue University, said hardware is one of the few retail categories that have so far resisted the shift to e-commerce.

Partly, Lawry said, this is because customers value the advice they can get at a physical store.

“You cannot go to Amazon.com and ask someone how to install a doorknob,” Lawry said. “It’s a lot easier to drop in [to a store] and ask those types of questions in person.”

Because animals have individual personalities, he said, the dogs will help each of Trust Hardware’s locations develop its own vibe—a unique atmosphere that gives customers a reason to visit. “You cannot replicate that within a Lowe’s or a Home Depot.”

Hardware and home improvement purchases also tend to be items people don’t want to wait for, Lawry said. Customers might have an immediate need to fix a leaky pipe, for instance, or a sunny day might spur them to tackle a home improvement project.

Another reason hardware and home improvement stores are more resilient against e-commerce: They sell some items that are difficult or impossible to find online.

That, Taylor said, is one reason his stores carry propane gas, bags of ice and live bait. He also plans to add ice cream soon at his Pendleton Pike store. “People aren’t buying propane on Amazon—or ice, or bait.”

As the retail landscape continues to evolve, Taylor said, he is prepared to adjust his business model accordingly.

One idea he’s considering is adding home services—installation of products purchased at the store, for instance. Or maybe customers would be interested in recurring delivery service for their water-softening supplies.

“There’s so many opportunities to play in new sources of revenue as we continue to grow,” he said.

Landlords have taken notice of what Taylor is doing. “Every week, we get reached out to by landlords.”

Some of those queries have also gone to real estate broker Alison Melton, vice president of retail at Indianapolis-based ALO Property Group LLC.

Trust Hardware also appeals to landlords for other reasons, she said. “[Taylor’s] eating a substantial amount of space that has a very low parking requirement.”

Melton said she sees potential for additional Trust Hardware stores in the market, maybe nine stores total within the Interstate 465 loop. People don’t generally want to drive more than 20 minutes to reach a hardware store, she said, which means Trust has room to grow. “When you need to fix the water pipe, it’s right now.”•

6 thoughts on “With pups and personal service, Trust Hardware invests in brick and mortar”