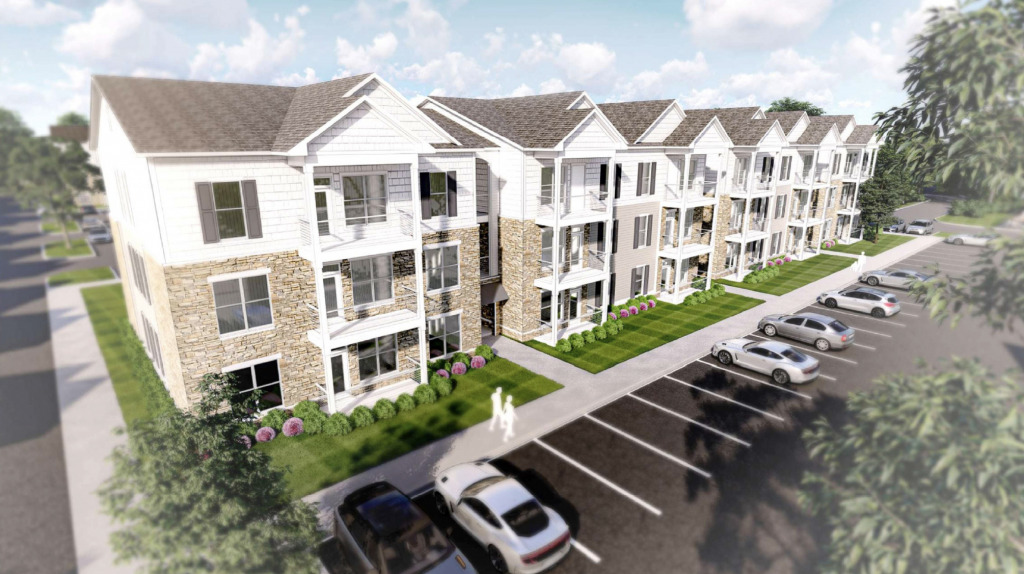 A Columbus, Ohio-based development firm plans to spend about $40 million to build a pair of residential real estate projects on acreage near Interstate 65 on the south side of Indianapolis.

The plan by Homestead Development LLC for 7525 McFarland Blvd.—between I-65 and East Stop 11 Road, on the west side of Emerson Avenue—consists of two components. The first would be a single 135-unit apartment building for individuals age 55 or older. The other would be eight buildings containing a total of 172 market-rate apartments.

The land is a mostly vacant portion of a 26-acre property owned by Southport Presbyterian Church and an affiliated Christian school. Homestead is asking for city approval to rezone about 13.6 acres from the SU-1, special use, classification to D-P, which allows for larger planned developments.

“We are excited to be able to bring more housing options to south Indianapolis,” Homestead Development President Matt Canterbury told IBJ in an email. “We have found a dynamic growth of businesses locating along the south [border of Indianapolis], and with that, diversity of housing needs of all types.”

He said the company initially had interest in developing only a new senior living community on the property, but that evolved into a larger project after the firm learned additional land was available.

The land is under contract pending necessary city approvals, including an OK from the city’s Metropolitan Development Commission and a confirming vote from the City-County Council. The MDC will consider the project during its meeting Wednesday afternoon.

The 55-and-older component would be developed as a three-story, E-shaped building on the northeast portion of the property with one- and two-bedroom units starting at $1,100 and $1,300, respectively, Canterbury said.

The $15 million building would be about 49,000 square feet, with about 10,000 square feet dedicated to amenities, and a surface parking lot with 117 or so parking spaces, including 10 covered spots. The entire senior development would take up about 4.5 acres

The $25 million apartment complex  portion of the project would be built on 8.8 acres to the west and south of the senior living structure. It’s expected to feature 72 one-bedroom units starting at $1,300 and averaging around 722 square feet and 100 two-bedroom units at $1,500 and 1,053 square feet.

Canterbury said the apartments are intended for individuals and families making at least 80% of the area’s median income.

The eight-building apartment community would have amenities including a game room, library, art room and business center, along with pet washing areas, a fitness center, a dog park and a community room. As proposed, the development would have 277 parking spaces, including 31 single-vehicle garage spaces.

Southport Presbyterian Church was founded in 1833 and its school, which serves about 85 students from kindergarten to fifth grade, was started in 1978. Matt Evans, the church’s communications director, said the campus will not be adversely affected by the Homestead project, as that land is generally underutilized.

In fact, the proceeds from the sale—a price for which has not been disclosed—will be used to pay off the remaining mortgage on the church property, fund renovations to the 25-year-old church and school, and allow for “financial rewards” for church and school staff, while also funding additional services to the congregation.

“After reviewing [Homestead’s] plans, that seemed like an excellent fit for our church and the neighborhood,” Evans said in written remarks. “Homestead Development has an excellent reputation in real estate development and property management. We felt their plans fit well with the existing community and highly valued what they could add to the church and surrounding area. As always, we are committed to being a part of the local community and we are thrilled to meet our new neighbors and join them in the community together.”

Homestead’s Canterbury said the projects are the company’s first in Indianapolis and the firm is evaluating additional sites for future projects.

He said the development is expected to add about $1 million to the area’s annual tax base. Homestead does not plan to seek city or state tax breaks tied to the development.

The project is set to break ground in the fall, with first units expected to open sometime in fall 2023. Columbus, Ohio-based Architectural Alliance is the design firm on the project.

Homestead, which has developed more than $200 million in real estate projects over the past 16 years, has completed at least four “active adult” communities so far and expects to develop about 40 over the next decade.