Home » Gardening: How to use mulch around your trees

Q: I have shredded bark mulch on all of my flower beds. Lately, I have noticed what looks like wet cornmeal on the mulch. These areas turn foamy and then turn leathery before turning into a brown powder. I spray them with the hose, but the spots just keep turning up in new places.

A: Your mulch has what used to be called “dog vomit fungus.” Now it is considered to be an organism called a “slime mold.” There are around 1,000 species of slime molds around the world, and they are very interesting. They normally live freely as single cells. They feed on bacteria, fungi and yeast cells that are decomposing the mulch and are probably very abundant. As long as the mulch remains damp, all of the organisms will grow.

At some point, the slime molds can chemically signal to one another to aggregate together—a process that is not completely understood. They form a large organism that may only have a single cell wall but is filled with cell nuclei.

Slime molds like the one in your yard can move and, if separated a little bit, can re-form into one piece. When in the multicellular form, slime molds can change the function of the cells. They can create stalks that have spores on top that can float on the wind to new locations. Each part of the main body, the stalks and the spores, were formerly single-celled organisms living independently.

There is nothing that needs to be done to the slime mold in your mulch, unless you don’t like the look of it. When you wash it with the hose, you just spread it around. It is easier to just pile some mulch or soil on top to cover it up. 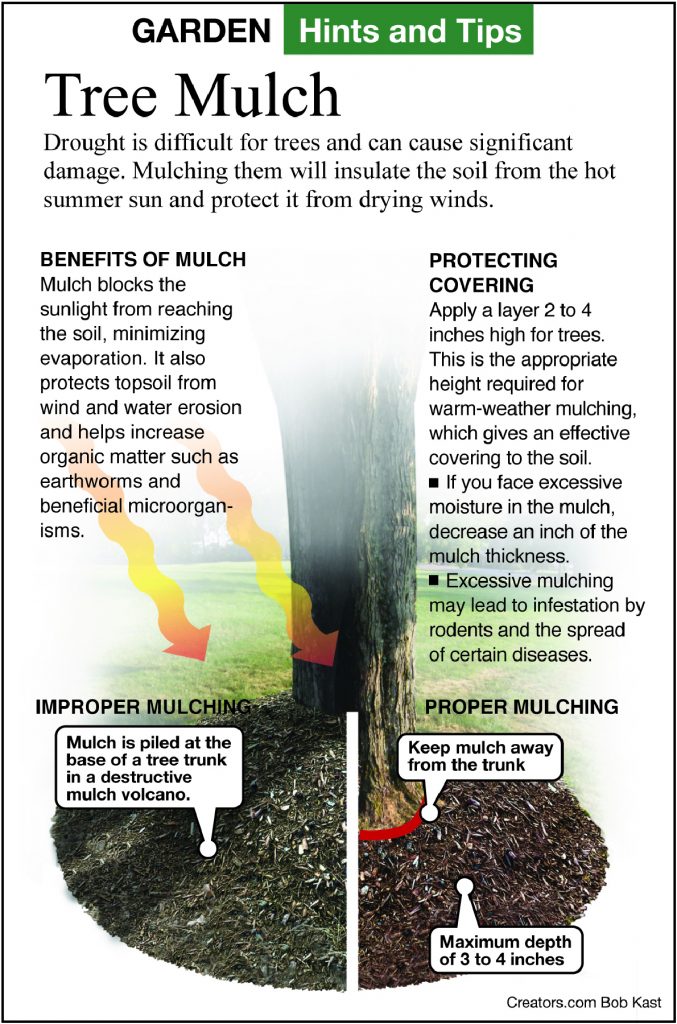 Q: Recently, I have noticed that several neighbors have piled mulch around their trees. These piles are way up on the trunk. Doesn’t this harm the tree?

A: Yes, mulch piled high on tree trunks is called a “mulch volcano,” which does have the potential to harm the tree.

There are a couple of problems with anything being piled up on the tree trunk. The way God made trees was that roots grow down, and stems grow up. Roots are designed to be constantly damp and in low levels of oxygen. Most stems and trunks are designed to be dry and in the air. When the mulch is piled on the trunk, it keeps the trunk too wet. The higher the pile of mulch, the more trunk that is covered, and the wetter the bottom area will be.

The bark on the trunk can rot, which, of course, kills the tree. Insects can bore into the trunk more easily when it is soft and wet, and insects are protected from enemies under the mulch. Rodents can also damage the bark after they burrow into the mulch pile.

Mulch is beneficial over the roots of the tree, especially a newly planted one. After the tree is planted, the grass should be removed around the hole for about six inches for each inch of trunk diameter, and the area should be covered with mulch. This removes the grass as a competitor for new tree root growth. The mulch then keeps the soil moist so the roots have a favorable environment to grow in. The mulch should be evenly spread a few inches thick.

Research shows that newly planted trees with grass up to the trunk grow much more slowly than trees with mulch covering the roots. Organic bark mulch is much better than any kind of gravel mulch. Until the tree has been in the ground for several years, flowers should not be planted around the base of the tree.

As the tree grows, mulch should always be left around the base of the tree but not on the trunk. If grass is allowed to grow next to the trunk, it will look unsightly. Then you will want to remove it. If you use a mower, you will have to scrape the tree to get all of the grass. If you use a string trimmer, you will tear off some bark each time you trim, and it will not grow back fast enough. You are actually cutting the tree down with the string trimmer. A ring of mulch around the tree prevents all this damage.