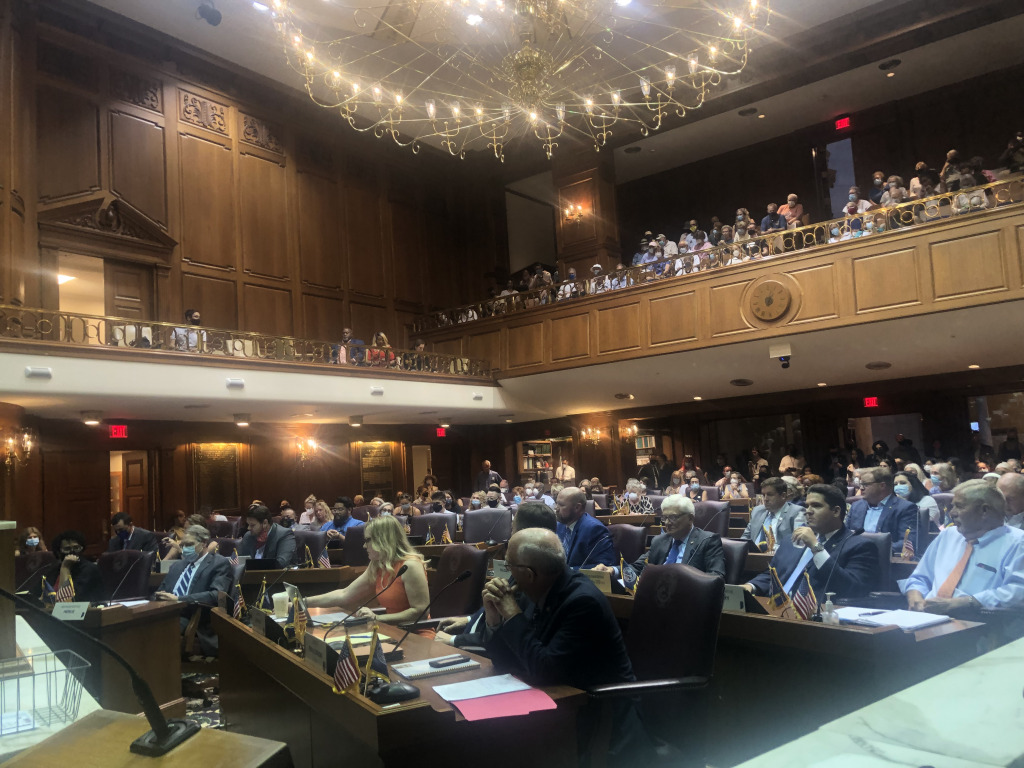 Hundreds gathered in the Indiana House Chamber for an initial redistricting public hearing before lawmakers begin to draw the maps. (Photo by Emily Ketterer)

Lawmakers heard more than two hours of testimony Wednesday at the Indiana Statehouse from citizens who spent most of their time asking for a fair redistricting process.

Hundreds filled the Indiana House chamber and overflowed into the Senate chamber across the hall for the final hearing in the initial redistricting listening tour held around the state by lawmakers tasked with redrawing Indiana’s state legislative and congressional maps.

The two-and-a-half hours of testimony came from citizens and individuals representing numerous organizations, including several people from the Indiana Citizens Redistricting Commission. Most of the comments covered common ground, with speakers asking for a fair process, more competitive districts, not to split communities, and for lawmakers to not consider political data when drafting maps. Several people also asked for additional hearings across the state once the maps are drafted.

More than 40 people signed up to testify, and all were heard, extending past the two-hour time limit for the hearing announced by co-chair Rep. Tim Wesco, R-Osceola.

Young people, high school and college-age, made up a large portion of those who testified. Most of them said they felt their votes did not matter, saying part of that came from the way the legislative maps are drawn in favor of one party.

Jack Wanninger, of Indianapolis, said he voted for the first time in the last election. As a Democrat, he said he knew it was “delusional” to ask lawmakers to draw every district competitively, but he said the Statehouse, where the Republicans hold supermajorities in the House and Senate, should not be composed of “that many members in a single party.”

“I don’t think 78% of people in Indiana are voting for Republicans,” Wanninger said.

Several of those testifying asked for more competitiveness, and gave examples of districts they thought were drawn intentionally to separate communities. Some mentioned districts such as Senate District 36, composed to include Marion County but also a small portion of Johnson County, or Senate District 28, which looks like a “middle finger slipping into the city of Indianapolis,” Irvington resident Kyle Mann said.

Speakers also called out the House Republicans for hiring Jason Torchinsky, a national GOP redistricting attorney, for legal services. Julia Vaughn, policy director for watchdog group Common Cause Indiana, said Torchinsky does not prioritize fair redistricting. He and his law firm have been known for defending GOP-drawn maps in legal battles and opposing independent redistricting commissions, she said.

“Putting Jason Torchinsky in charge of ensuring Indiana follows the Voting Rights Act is like naming a person convicted of arson as the fire marshal,” Vaughn said.

Wesco told reporters Wednesday that Torchinsky was hired because “federal law is extremely complex” and having counsel will ensure the Legislature is meeting legal guidelines when drawing the maps.

What is next for lawmakers as they go to draw the maps is unclear. Data needed for redistricting will be released by the U.S. Census Bureau on Thursday, and Wesco could not commit to a set timeline for when the proposed maps will be drawn, when they would be released and what day exactly lawmakers will return to the Statehouse.

He said it will take a few weeks to synthesize the data and then a couple of weeks to draft the legislation, so the rough timeline is for lawmakers to return mid-September.

The public will have two more opportunities for comment during the regular legislative process when the maps go through the House and then the Senate elections committees. Wesco said extending the redistricting process further by giving extra weeks for the public to review and comment more on the proposed maps in a second listening tour would not be an option, mainly because he heard some counties are concerned they will not have the redistricting data in time to prepare for the May primary election in terms of getting precincts ready.

“To delay this any longer than it’s already been delayed could create some significant ripple effects,” Wesco said.

As far as the hearings go, Wesco said public input is important in the process. He said comments specifically pointing out districts some thought were unfairly divided will be helpful for them to look at as they draw maps.

Pierce and the other Democrat lawmakers urged Republicans to open the doors behind the map-drawing process now, so the public can see how they are redistricting.

“We need to know who’s  going to be assisting the Republican map-drawing, who’s actually going to be sitting at the computer drawing these maps, what political and demographic data will be used?” Pierce said.

Pierce also said House Democrats will not be drawing their own “dream map” to present to the Legislature, even though all four caucuses were allotted $54,000 for redistricting expenses. The party supports independent redistricting efforts, even if it would mean their own districts could be affected politically.