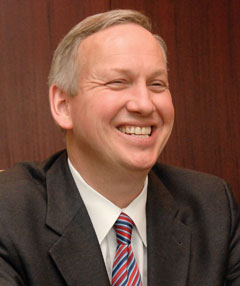 Hoosiers for Great Public Schools was created in April 2020 and is headed by Bart Peterson. The Democrat was mayor of Indianapolis from 2000 to 2008. He’s now president and CEO of Christel House International, an Indianapolis not-for-profit that operates K-12 public charter schools in high-poverty areas.

The Carmel-based PAC has since raised $1.6 million, but none of that money came from Hoosiers despite its name.

The donations were made by just two wealthy supporters of charter schools: Texas billionaire John Arnold and Netflix CEO Reed Hastings, who resides in California.

“This is a bi-partisan effort focused on supporting elected officials who share our belief in the need to fight for increased access to quality schools and more resources for all public school students, and especially low-income students and those of great need across Indiana,” Peterson told the Indiana Capital Chronicle in an email.

Although charters saw bipartisan support when introduced in Indiana 20 years ago, Democrats have also become less favorable to the publicly-funded, privately-operated schools. Lawmakers in Indiana’s Republican supermajority, however, continue to rally behind charter school expansion and other “school choice” options, including the creation of a statewide voucher program for private schools.

Where the PAC gets its money

Arnold’s one-time, $200,000 contribution in May 2020 was the PAC’s first. Half of those dollars went to Indiana’s House Republican Campaign Committee the next day before Hastings made his first donation—a separate $200,000 gift—a few weeks later.

Hastings went on to give the PAC another $500,000 in October 2020. The billionaire made another $700,000 donation earlier this year in February, according to campaign finance filings.

The Netflix CEO has dished out millions to start new charter schools around the country. He currently sits on the board of the California Charter Schools Association and previously served on the California Board of Education for four years.

Arnold is an outspoken supporter of charter schools and is steeped in the school privatization movement. His Houston-based foundation has previously gifted millions to The Mind Trust, an Indianapolis-based organization that has fostered charter schools throughout the city.

Peterson did not comment specifically on how Arnold or Hastings came to be involved with Hoosiers for Great Public Schools. Arnold and Hastings did not reply to multiple requests by the Indiana Capital Chronicle for comment.

“We are grateful to John Arnold and Reed Hastings for their support for this effort to close this significant opportunity gap for students in Indianapolis and across the country,” Peterson said. “We welcome other donors with the ability to contribute who share our mission.”

Former Democratic mayor at the helm

Peterson said charter schools, specifically those in Indianapolis, “are an important part of our public school system.” He noted that the schools serve majority low income families and families of color “who sought out quality schools for their children.”

The former mayor continued that he’s long supported making contributions to improve funding for charter schools—a move that bucks his own party.

“I’ve spent my career working across party lines fighting for equitable educational opportunities for students, particularly for low-income students in Indianapolis, and we support elected leaders who share this commitment to expanding access to quality schools,” he said. “We have fought for all Indianapolis public schools, and our families, to receive their fair share of state public education funding.”

But the Indiana Coalition for Public Education (ICPE) maintains that charters and “innovation schools” are not public schools — even though they are called such in state law. The advocacy group emphasizes that the schools often do not provide transportation to and from school, student enrollment is typically decided through a lottery.

The ICPE also stresses that charter schools do not share the same accountability requirements as public school districts, including a duty to serve all students within a given geographic area.

The privately-operated schools additionally lack governance by a democratically-elected local board, and are also exempt from certain teacher certification and financial reporting requirements mandated for traditional public schools, according to the nonprofit.

The Indiana GOP candidates who benefit

Dozens of lawmakers in the Indiana General Assembly’s Republican supermajority have benefited from the PAC’s contributions in the last two years.

In 2020, Hoosiers for Great Public Schools contributed a total of $150,000 to the House Republican Campaign Committee and another $50,000 to Republican House Speaker Todd Huston’s campaign, according to campaign finance records.

Hoosiers for Great Public Schools has additionally given to other PACs, including $200,000 to RISE Indy, which describes itself as drawing attention to issues around student achievement and equity in local schools, and $100,000 to Hoosiers for Quality Education, which broadly favors school choice. Peterson is also a RISE board member.

Since April, Hoosiers for Great Public Schools has doled out more than $130,000 to GOP lawmakers who face contested races in the November election.

It’s not yet clear what charter school-related bills could be introduced in the upcoming 2023 legislative session.

The state legislature passed a law in 2020 that says school districts “may” share referendum dollars with charter schools.

A separate bill that sought to go a step further, forcing Indiana’s public school districts to share revenue from property-tax referendums with local charter schools died in the Senate without a hearing, however.