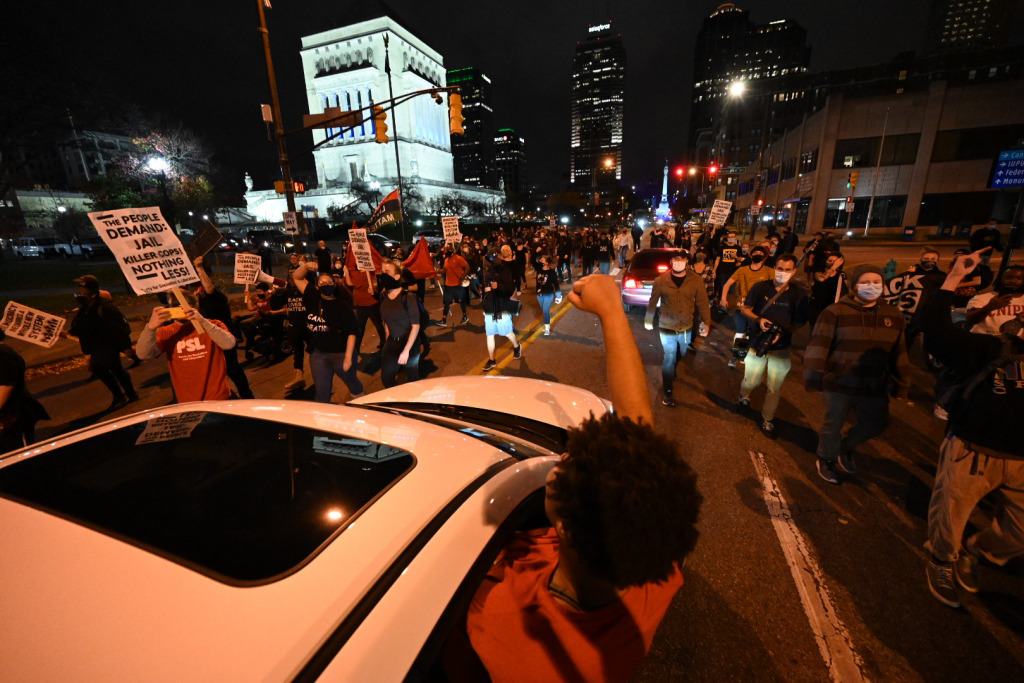 Protesters gathered downtown following a grand jury decision not to indict an Indianapolis police officer involved in a fatal shooting in May. (IBJ photo/Mickey Shuey)

More than 200 people gathered downtown Tuesday night to peacefully protest a special grand jury decision not to indict an Indianapolis police officer involved in a fatal shooting in May of a man accused of exchanging gunfire with the officer.

The protesters carried signs and chanted as they marched for more than two hours along Meridian, Pennsylvania and Michigan streets, calling for justice for 21-year-old Dreasjon Reed. The march initially continued even as heavy rain began to pelt the crowd, although protesters paused under an overpass on Pennsylvania to get a break from the downpour.

Throughout the evening protesters blocked streets and intersections but remained peaceful. Indianapolis police officers largely hung back, allowing the protesters to move freely.

However, dump trucks with snow plows appeared to be positioned a few blocks away and protesters speculated they would be used to block streets if police decided to crack down on the protesters.

Downtown businesses had prepared for the possibility of vandalism and looting, boarding up windows and blocking off entrances to buildings. But by 9 p.m., there were no reports of the kind of violent behavior and riots downtown experienced in late May and it appeared protesters were starting to disperse.

Protesters said they planned to regroup on Wednesday evening

Now at Delaware and Vermont Streets, blocking the intersection. pic.twitter.com/WAokgpCPXG

A number of individuals and organizations that represent African American called for peace on Tuesday, following Special Prosecutor Rosemary Khoury’s announcement that the grand jury had not found enough evidence to indict Dejoure Mercer, the Black officer who shot Reed, who was also Black.

“In our democracy, activism and peaceful protest are fundamental,” said City-County Council President Vop Osili. “The council urges those exercising their first amendment rights to do so peacefully.”

Indiana State Police, who investigated the shooting, made public several pieces of evidence Tuesday evening that they said show that Reed had pulled a gun during the chase and shot it twice. The evidence shows Mercer shot 13 times at Reed.

The NAACP’s Greater Indianapolis chapter issued a statement saying that it appreciated the state police and special prosecutor’s transparency in the investigation. The group called for nonviolent protests only.

“By remaining peaceful, the overall message of respect and transparency in policing will not get lost,” said Chrystal Ratcliffe, the group’s president.

The Indiana Black Legislative Caucus, which has a number of members from Indianapolis, also urged against violence.

“While we respect engagement and demonstrations, we want to encourage everyone to be cautious,” the statement said. “The IBLC will remain vigilant and continue to monitor the situation. We implore everyone to remain safe and remember that we are in the middle of global pandemic. Please treat each other with humanity and kindness.”