Home » Q&A: From microscopes to telescopes—tales of great Hoosier scientists 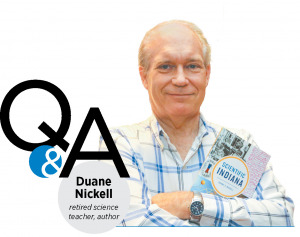 Scientists with a prominent Indiana connection have won a dozen Nobel prizes for groundbreaking discoveries, from the expansion of the universe to nuclear magnetic resonance, the basis of generating images of the organs in the body.

Duane Nickell, a retired science teacher in Indianapolis, decided it was time to collect the stories of 17 prominent Hoosier scientists. What resulted is a book called “Scientific Indiana” that’s hitting stores now.

What prompted you to write this book?

The idea occurred to me about 10 years ago. I like to browse bookstores, and I found some books of famous Indiana people. When you look through them, you see celebrities, athletes, artists, writers and politicians. But there were no scientists. And I just didn’t understand. I thought, somebody needs to write a book.

How did you choose which scientists to include?

There are some colorful and controversial scientists in your book, like Alfred Kinsey of Indiana University, who researched human sexuality.

How did you get interested in science? Did you have a chemistry set as a boy?

My dad was a sixth-grade science teacher. He actually got retrained back in the mid-’60s after Sputnik, when there was a big push for science education. Our whole family spent a summer at Murray State University. My mom was taking courses to get her degree after she had kids, and Dad was getting some extra certification in science teaching. I remember looking through the telescope on campus.

Who is the most underrated or little-known Hoosier scientist?

I would say Herman Muller. He was a geneticist, and he won the Nobel Prize in 1946 (in physiology or medicine) for discovering that X-ray radiation can cause genetic mutation. His life took a lot of twists and turns before he landed at Indiana University in the 1940s. He basically spent the rest of his life at IU being a professor of biology and genetics.

Are there any Nobel laureates now living or working in Indiana?

Not now. The last one living here was Ei-ichi Negishi, a retired chemistry professor from Purdue. He won the 2010 Nobel Prize in chemistry. He died in Indianapolis on June 6 (at the age of 85).

What was your biggest surprise in researching this book?

For my entire teaching career, I always taught that Edwin Hubble had discovered that the galaxies were all moving away from us. But in my research, I learned that Vesto Slipher, an astronomer who was born in Indiana and got his Ph.D. from IU, made that discovery. Hubble took it a step further and came up with the Hubble Law that the further away a galaxy is, the faster it’s moving away.

Well, I hope your book sets the record straight on that.

2 thoughts on “Q&A: From microscopes to telescopes—tales of great Hoosier scientists”