The state is preparing to spend $13 million to kick-start the process of combining the campuses of the state’s separate schools for deaf and blind students after the pandemic left the sometimes-controversial debate about consolidation largely at a standstill.

State officials say no final decisions about a combined campus have been reached, but they are forging ahead for now with the prep work, including the search for as many as 120 acres to house the schools.

In 2019, the General Assembly created a task force charged with considering whether to move the schools to a shared site. After a handful of meetings, the nine-member task force decided in late 2019 that a combined campus within a 10-mile radius of Interstate 465 would allow the schools to better serve their students.

But little has happened since then and Democratic lawmakers in Indianapolis who represent the legislative districts where the schools are located say they and some constituencies within the blind and deaf communities have been left out of a process led by the Republican supermajorities in the Indiana General Assembly.

A capital needs assessment found both schools would demand nearly $100 million in improvements over the next 20 years. And the task force determined that the size, condition, and the financial investment needed to maintain the existing campuses would detract from the ability of each school to focus its resources on students and staff.

That recommendation was the first step in what looks to be a long process. Last month, the Legislature gave $13 million to Gov. Eric Holcomb’s Department of Administration to start assessing what each school needs and find a potential property for a combined campus.

The money comes from a $550 million capital projects fund the General Assembly set aside as part of the nearly $2 billion revenue surplus the state found itself with two weeks before the end of the legislative session in April.

The funding will primarily go toward paying an outside real estate firm to scout land for a potential combined campus and allow the DOA to study each school’s culture and needs, said Matt Kent, the department’s chief financial officer.

It will now be the department’s job to determine if building a combined campus is feasible and can meet the task force’s recommendations. The task force has been dismissed and will no longer be involved in the process, but leaders of the blind and deaf schools will have input, Kent said.

Finding the right spot for the campus will be a challenge, hence the need for an outside real estate expert, Kent said.

Both the schools’ current campuses span massive amounts of land. The deaf school sprawls across 80 acres and has 21 buildings, and the blind school sits on 67 acres with 29 buildings. The task force suggested at least 120 acres for a consolidated campus to fit the needs of each school, which would be on the same plot of land, but operate separately from each other.

Several lawmakers on the State Budget Committee expressed skepticism about whether such a large piece of land could be found in Indianapolis. Sen. Ryan Mishler, R-Bremen, said 120 acres seemed “a little excessive.”

Parameters set by the task force are just recommendations, so the state is not bound to only picking a site that is 120 acres. But Kent said the state would like to stay close to that number.

The remainder of the $13 million would be used to start design, architecture and utility services, if land is acquired.

But construction and completion of a new combined campus are years down the road, even if the state decides to move forward with the project. Kent told the State Budget Committee he could not give a construction timeline, but he expects it would take at least four years to bring the entire project to completion. 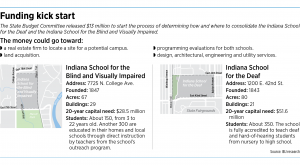 The allocation of $13 million from the State Budget Committee follows what some lawmakers and advocates described as two years of little transparency on the next moves the state would take to determine the fate of the schools.

The process is turning into a political battle between Democratic lawmakers, who represent the districts where both schools are located, and Republicans who control the Legislature and the Governor’s Office, said Rep. Greg Porter, D-Indianapolis.

He said he was largely kept in the dark regarding the task force’s work and called the decision-making process so far “abominable.” He said he did not know about the $13 million in funds going to the potential new campus until it was on the State Budget Committee agenda for June.

“I haven’t been in the loop. I’ve tried to be involved as much as they would let me,” Porter told IBJ. “This [Republican] supermajority is forcing a process on those two communities and two different cultures.”

Porter is worried the blind and deaf communities are being left out of the discussions.

“I just want transparency at the table. I’m worried that I don’t even think the stakeholders are at the table, they’re just on the menu,” Porter said.

But Sen. Liz Brown, R-Fort Wayne, who was chair of the task force, said the process was not forced and that officials from both schools and advocates in the blind and deaf communities were involved.

“We’re not forcing these two schools to live together,” Brown said. “This was a two-year process, and it was a very well-thought-out representation of the community.”

Two other Democratic lawmakers representing the district where the blind school is located, Sen. Fady Qaddoura and Rep. Carey Hamilton, also expressed concern to Kent at the State Budget Committee meeting in June about being involved in decisions for the schools.

“It is critical to engage those who represent the constituents that will be impacted by this,” Qaddoura said.

School administrators on board

Kent said the Department of Administration will work with each school closely to determine what they want as far as building designs, programming and the location of a combined campus.

Both schools are still on board with the idea of moving to a new combined campus, he said.

David Geeslin, superintendent of the Indiana School for the Deaf, told IBJ in a written statement he and the school are “excited about the prospect of a new facility and look forward to being involved in the process.”

Michael Dalrymple served on the board at the school for the blind for about eight years. Before he left two years ago, he was involved in several conversations about potentially combining campuses with the deaf school.

“This idea had been tossed around for years before the study or the task force was created,” Dalrymple said.

During his time on the school board, he recalled the pressure each year from the state to cut down on spending.

“We were given an annual budget, and if we met it after cutting something, then two years later, they’d come back saying, ‘You did such a good job last time with the budget; now you need to cut another 3%,’” Dalrymple said. “That same conversation happened year after year.”

Dalrymple attended the school for the blind until seventh grade, and his parents are alumni as well. The school has been a part of his life for as long as he can remember, he said,

He does not anticipate any harm in combining the two schools into one campus—as long as it helps relieve that spending pressure and the outcome is better for the students across the state.

“There’s no reason to think that it can’t be,” Dalrymple said. “You know, it’s not the building that teaches the students, it’s the programs.”

However, not everyone is on board with the idea of consolidation.

Holly Elkins with the Indiana Association of the Deaf told IBJ she is concerned the blind and deaf communities are not being represented in this decision.

The deaf school has been a touchstone for many families over its 100-year history, she said, and moving it is the equivalent of suggesting that Monument Circle be ripped from downtown.

She said the state task force’s recommendations are simply an effort to make the existing campuses available for redevelopment.

“This is a land grab of both existing campuses by shadowy businesses who have circled over the campuses like vultures waiting to pounce,” Elkins said.

The blind school in particular lies in Washington Township, which has few larger parcels available for development. Many high-value homes sit in the area, which means developers could pay top dollar for the property.

A number of homes in that area, from 75th Street to 82nd Street, are valued at more than $1 million, according to data from the MIBOR Realtors Association.

The deaf school sits in an area with homes priced in $100,000 to $200,000 range, according to MIBOR data, but that area could be of interest for an Indiana State Fairgrounds expansion.

Qaddoura said at the State Budget Committee meeting that since he took office, he has received numerous phone calls from residents near the blind school asking what would become of the property if the schools move.

Hamilton also asked that the General Assembly and the surrounding communities be involved in what happens to both properties, if the schools move.

“Folks in these neighborhoods all around will realize there is a public opportunity to do something good with this property,” Hamilton said.

Kent noted that the Department of Administration doesn’t make decisions on what the existing campuses could be used for.

One thought on “State to spend $13M to prep possible merger of blind, deaf school sites”