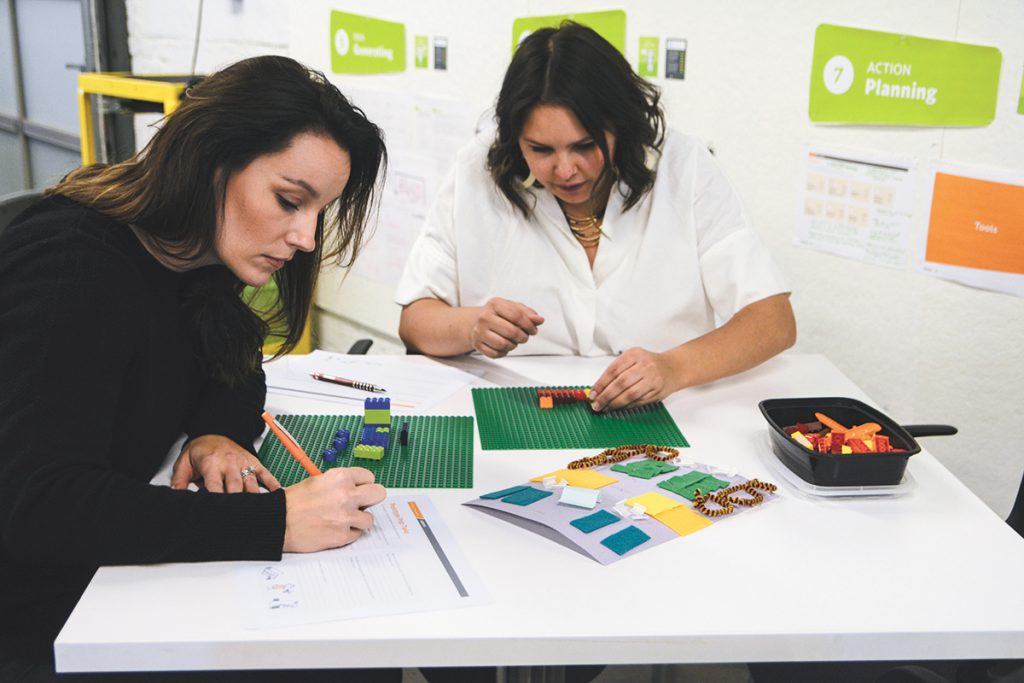 Meghan Tooman, left, who works for DORIS Research’s main office in Indianapolis, and Megan Little, who works for a DORIS franchise in Denver, use toy blocks and other materials to rethink office spaces. The team spends many hours gathering feedback from workers before designing their workspaces. (Photo courtesy of DORIS Research)

An entrepreneur walked into John McDonald’s office in late April with an idea that could transform the process of buying and selling a home. He had drafted a chart that laid out his plan, and now he needed an app and a website to make his vision a reality.

“The problem,” said McDonald, whose new Next Studios in Fishers just launched to try to turn ideas into products and products into companies, “is that at no point did he ask any Realtors, any homebuyers, any home sellers for their input.”

“If he continues to go down the pathway of developing this service, he might be right,” he said. “Or he might be wrong. In which case, he’s going to suffer a catastrophic failure in his business model because he failed to, at the very beginning, pressure-test the idea with actual victors or victims.”

So McDonald and his colleagues will be doing that pressure-testing with the entrepreneur using design thinking, the name for a particular way of approaching problems and situations to come up with solutions or products.

They’ll start with a session to gather input from potential users about his idea. That will yield information about their target persona—here’s whom they’re after and why—and they’ll use those findings to shape the rest of the process.

From there, McDonald and company might put the entrepreneur’s home-selling plan through as many as 14 exercises to test its viability. The purpose is to figure out how best to make the product faster, better, easier, more fun—and, therefore, improve the user’s life.

“This user-centric view has always been part of what I’ve been trying to do,” said McDonald, who founded and later sold the internet-of-things firm ClearObject. “Only recently have I discovered that it had a name and a process.”

What is design thinking?

Design thinking has been around since at least the 1960s. Sometimes it’s called “human-centered” or “customer-centered” or “user-centered” design. Initially, its focus was in areas such as architecture, graphic design and industrial design, to produce physical products.

“In many of these areas, people have never seen themselves as designers,” said Bergqvist, who has been teaching design for 35 years and has written or edited five books on design thinking and related topics.

Designers, he said, are good at getting to the core of an issue. If someone approaches a designer and says, “We have this problem and we want you to help us,” a good designer asks, “Are you sure that’s the problem?” They think creatively, openly and they also think in terms of the outcome—what are the consumers trying to achieve?

“The whole idea with this design-thinking movement,” Bergqvist said, “is that, when you change your mindset and you start to see yourself as a designer and you start to be aware of the possible approaches and methods and techniques that designers are good at using, things happen. You will now be able to do different things and you can do it in ways that lead to new and different results.”

Reuben Zielinski is co-founder of Carmel-based Redux, which developed technology to remove water from cellphones and other small electronic devices. He said the design-thinking process helps him sort through ideas in a logical way.

“By labeling it ‘design thinking,’ I use it as kind of a gut check of, ‘Are we skipping any steps here?’ If we start putting a design together and say, ‘Wait, we skipped the research part here,’ or, ‘This is taking too much effort if we haven’t proven there’s an opportunity yet,’ it allows us to back up,” he said.

“And whether it’s a questionnaire or anecdotal information or reviewing data we have from our existing users, it’s been a great way to make sure we’re not skipping any steps.”

Without the process, Zielinski said, “It’s easy to get excited about something and say, ‘Let’s order it and figure it out.’ We’ve proven time and time again, you keep following the steps.”

Redux’s latest invention, the Gen CM, a hearing-aid dryer, came to be because now-director of audiology sales Matt Hay’s hearing aid got wet during a ski trip to Michigan.

From the time Zielinski was presented with the problem, it took four months to talk to consumers and audiologists about what they wanted from the product and then design and redesign a smaller, faster, better box that can dry a hearing aid in 12 minutes—less time than the typical appointment with an audiologist.

Redux started working on the hearing-aid dryer at the end of last year. If all goes as planned, it will be on the market in mid-June.

Design thinking is in use in a wide variety of firms across the Indianapolis area—and in a variety of projects. SmallBox, a marketing agency that focuses on strategy, web and brand experiences for mission-driven organizations, helped a large not-for-profit figure out how its different state associations and worldwide organization could best complement one another’s work.

“We always start conversations talking about who it is we’re solving for and thinking of ideas for how we can begin to include them as co-creators in the process,” she said.

From there, the strategy was to frame the challenges and opportunities to create a difference in the customers’ current experiences, come up with ideas about how to implement changes, build prototypes of the ideas and test which ideas are best. In the final step, participants were given Monopoly money to fund the best idea.

“When you attach money to it, people really pay attention,” Herbert said.

The result was three ideas the organization is now exploring.

DORIS (an acronym for Design Oriented Research for Impactful Solutions) is a firm that uses design thinking to help companies rethink their workspaces. The firm consulted with a west-side food manufacturer to reconfigure its workspace to help make its employees more comfortable. The workers, called bakers, had a hard time at break times and lunch times with crowding and other concerns. Restrooms were too far away, and locker rooms were inadequate.

DORIS founder Samantha Julka and her colleagues went through an eight-step design-thinking process that prompted management to change the physical layout of the facility.

“It’s designed the way the employees thought it should be,” Julka said. “And once they reopened, they have outperformed month over month. Every month, they produce more. The inclusion of the bakers has paid off for them. They’re more productive and effective.”

KSM Consulting, which solves challenges in technology, data analytics and management consulting, worked with high school seniors in a large suburban school district to think through the projects designed for an innovation class.

KSMC took the students through a five-step process designed to think about the right way to solve problems, to understand how our minds process the world and problems they encounter, and to know how to separate traditional thinking from innovative solutions.

“Most of us have a real hard time being innovative in day-to-day life and tend to approach problems in traditional ways,” CEO Mark Caswell said. “Design thinking gives you a framework and a language and a way to talk about it, and it allows you to give your entire organization a way of doing things.”

Caswell’s advice: “The best way to learn design thinking is to just do design thinking. Just try it. You can’t mess it up. And even if you mess it up, that’s all part of the process, anyway.”•