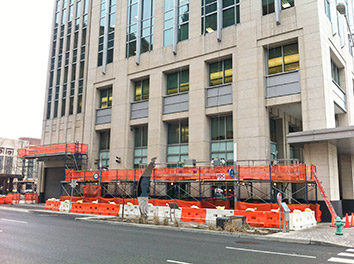 Building contractor Duke Construction Limited Partnership blames the problems on design flaws by CSO Architects Inc. The subsidiary of locally based Duke Realty Corp. is suing the local architectural firm for breach of design contract and negligence to recoup the cost of repairing the building.

Workers are making fixes to metal panels and can be seen performing the work on the east side of the 14-story structure at the southwest corner of Washington Street and Capitol Avenue.

In the suit, filed in November in Marion Superior Court, Duke Construction claims the metal panels have started to split due to excessive moisture exposure caused by CSO’s inadequate design.

But Alan Tucker, a CSO principal, maintains the problem is with the workmanship of now-defunct ASI Ltd., which manufactured and installed the building’s curtain wall.

“They’re no longer in business, so we’re sort of the last people standing on this issue,” Tucker said.

ASI, which was in Duke’s Anson development in Whitestown, abruptly shut its doors in December 2011. Its work downtown includes such buildings as the 33-story JW Marriott hotel, Lucas Oil Stadium and Central Library.

The suit does not specify the amount of damages Duke is seeking to make the repairs. But claims relating to design flaws can get expensive, said Mark Voigtmann, who leads Faegre Baker Daniels LLP’s construction law practice.

“Generally speaking, when you’re talking about a high-rise building that has water-intrusion damages, you’re likely talking about millions of dollars,” said Voigtmann, who’s not involved in the Duke lawsuit.

The $55 million Simon building opened in 2006 and earned architectural accolades by winning the Monumental Award, which recognizes excellence in local design and construction.

CSO, the city’s third-largest architectural firm based on 2013 billings, served as associate architect on the Simon project alongside lead designer Ratio Architects Inc., which also is locally based.

According to Duke’s lawsuit, CSO’s scope of work on the project included architectural and engineering services for the core and shell of the 370,000-square-foot building.

Simon began noticing troubles with the design in 2011, when the company notified Duke that composite metal panels on the outer shell had begun to split.

Officials at Duke and Simon declined to comment on the suit.

CSO has not yet formally responded to the suit. But an attorney for the firm, Nicholas Nizamoff of DeFur Voran in Fishers, said he hopes the two sides can come to a resolution without a court battle.

“Duke and CSO have had a good relationship and probably will going forward,” he said. “It’s probably something that the parties will get resolved amicably.”

The building is made of aluminum and glass with limestone and composite metal panel walls, with two large canopies on the north and south sides wrapped by metal panels.

After noticing the damage to its building, Simon in January 2012 hired Carmel-based engineering consultancy Keeler-Webb Associates to analyze the building’s design. The following April, Keeler-Webb issued a report concluding that the splitting of the metal panels was caused by their exposure to excessive amounts of moisture, and blamed the design.

Simon followed up by hiring Charlestown-based KPG Enterprises to examine not only the metal panels but also the curtain wall system. KPG determined horizontal trim pieces on the curtain wall should have been attached using mechanical fasteners but were not, and that the joints of the metal panels should have been designed in a manner to include caulking and stainless steel fasteners.

Armed with the information, Duke’s vice president of construction, Jeffery A. Stone, fired off a letter to CSO in January 2013, notifying it of the findings.

“The curtain wall system has experienced some unanticipated movement, which has caused certain trim pieces to buckle and has caused another portion of the system to move out of alignment,” Stone said in the letter, which Duke included in its lawsuit.

Duke paid CSO $284,500 for its work on the Simon project, according to a contract between the two firms.

“It can be design, it can be implementation of the design, or it can be a combination of those,” he said. “So it’s a highly specific analysis that the court or arbitrator would have to engage in to determine who’s right.”

Arguments arising over construction flaws are not uncommon.

The Carmel Redevelopment Commission, for instance, last month agreed to accept $5.3 million to settle a lawsuit over defects found in the structural steel web supporting the Palladium’s domed roof.

Rips in the structural steel discovered during construction of the $119 million concert hall halted the project for three months in 2009.

But perhaps the most significant court dispute to arise from claims of construction errors involved the Indianapolis-Marion County Public Library’s expansion of the downtown Central Library.

The library system collected more than $20 million from several firms as part of its legal quest to recoup cost overruns associated with the project. Library officials halted construction on the project in March 2004 after discovering gaping holes and other defects in the concrete of the underground parking garage.•