My friend Carl Richards is a certified financial planner, creator of The New York Times’ “Sketch Guy” column, and author of “The Behavior Gap—Simple Ways to Stop Doing Dumb Things with Money.”

In my last column, I passed along Richards’ advice to quit investing your precious and scarce resources of time and energy in things that hurt you. He said the things we have the most trouble letting go of are the things we need to let go of the most.

I hope we’ve all found something to set down and let go in the New Year.

Richards also advises to stop spending based on others’ perceived wealth.

According to Richards, the only thing worse than judging a book by its cover is making financial decisions based on what you assume the book might tell you. We’re hard-wired to compete. In the past, humans competed for resources and survival. Now, we compete for attention and social currency.

Richards says, “To figure out if we’re ‘winning,’ we use visual shortcuts, and money offers one of the easiest ones. We look around and compare how we’re doing with what we see.” 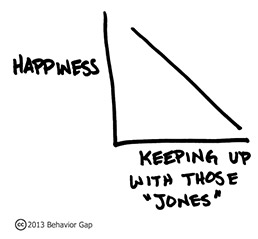 Richards points out, “When it comes to other people and their money, we’re making subconscious judgment calls constantly. Those judgments are based invariably on a broad set of assumptions. We see the car someone drives. We see the home someone buys. Then, we make judgments about their success and intelligence.”

The problem is, the consumption we see is the proverbial cover of the book. In other words, it does not necessarily tell you anything about what’s inside. Perhaps your neighbors are fabulously successful and wealthy. Good for them. It’s equally likely they borrowed 100 percent of the purchase price of the house with an interest-only mortgage, are upside down on their seven-year car loan, and have saved a pittance for their retirement and college for the kids.

As Richards says, we struggle with relative comparisons and money. He wrote, “Instead of focusing on what’s in our best interest, we compare ourselves with others and act accordingly.” We don’t measure our decisions against our goals; we measure them against what we see around us.

The challenge of being on this “positional treadmill” is that the goal line is always moving. Richards asks, “How close can we possibly get to our goals if we’re constantly chasing someone else’s?” Just like Sisyphus, you’ll spend your life rolling this financial boulder uphill, only to watch it roll back down again.

Make sure your spending choices move you closer to your goals. If you can apply that filter, it doesn’t matter what the Joneses are doing. You’ll be better off in 2017 and beyond.•

Kim is the chief operating officer and chief compliance officer for Kirr Marbach & Co. LLC. He can be reached at (812) 376-9444 or mickey@kirrmar.com.