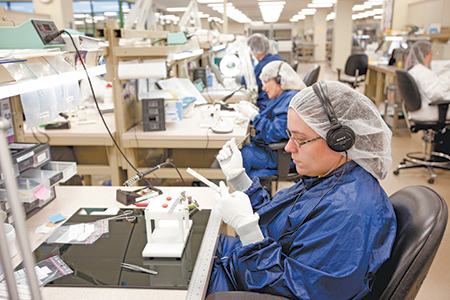 For years, it’s been a rallying cry for medical-device makers in Indiana and around the nation: A 2.3 percent tax on sales to help fund the Affordable Care Act has hurt business and slowed innovation.

Now, under a Republican president and Congress, they hope the controversial tax will die.

They seem to have good reason to hope. A bipartisan group of more than 200 representatives and senators has introduced two bills in recent weeks that would permanently repeal the excise tax, which is levied on products from tongue depressors and stents to hospital beds and MRI machines. President Donald Trump has said he would support the repeal.

Indiana is home to 155 device makers that employ about 17,000 workers.

The tax, which went into effect in 2013, was intended to raise $30 billion over 10 years to pay for subsidies to lower- and middle-class Americans to buy health insurance on the individual marketplace.

After lengthy protests by device makers, the tax was suspended for two years beginning in January 2016. But now, some say, that suspension could turn into a permanent repeal.

Indiana device makers who have protested the tax range from Cook Group in Bloomington, with thousands of employees across the country, to small metalworking and plastic-welding contracting shops that employ a few dozen people.

Cook said the tax has cost it $15 million a year, which has forced it to delay about five new projects, including products, plants and equipment. Instead, the company has tried to squeeze more capacity out of existing plants, but has fallen behind in delivering products.

“Some of the facilities are just stuffed to the gills,” Cook Chairman Steve Ferguson said. “If you build new ones, they’re going to be more efficient and better for business. … It’s just been difficult. We’ve got production running at full capacity.”

He declined to reveal which products or factories have been delayed, saying he didn’t want to tip off competitors.

Nevertheless, Cook still has gone ahead with some capital projects, including a $16.5 million expansion of a medical research and development facility in Indianapolis’ 16 Tech area.

That’s a 60-acre tract of land just north of the Indiana University School of Medicine campus that is expected to include a mix of research labs, business incubators, corporate offices, apartments and retailers.

Ferguson said he expects the tax to be repealed, but lamented that it has taken so long.

“I think it will happen,” he said. “It was just harder than it should have been.”

At Genesis Plastics Welding, a contract manufacturer in Fortville, workers use radio-frequency welding and heat-sealing technology to convert films into medical goods, such as deep vein thrombosis sleeves and containers for liquid bone cement.

CEO Tom Ryder said he works with big medical-device players to help them develop and prototype new products. But in recent years, his customers have slowed their development, blaming the excise tax. That limits growth for Ryder’s 100-employee company.

“If we don’t help them develop products, we don’t get to do as much long-term manufacturing, and we don’t grow,” he said.

The Indiana Medical Device Manufacturers Council, which represents dozens of companies that make devices ranging from orthopedic implants to hospital beds, said it favors a swift repeal of the tax. It said Indiana is the fifth-largest maker of medical devices in the country, representing an annual payroll of $1.5 billion.

Some companies have delayed hiring or capital projects as a result of the tax, which has hurt Indiana’s economy, said Kathy Heuer, the group’s executive director.

“Without full repeal, there is an atmosphere of uncertainty for our companies,” she said. “They’re not going to commit to expensive projects until they know what the future holds.”

But not all observers are banking on a quick repeal. Colleen Hittle, a health care and life sciences consultant for Navigant in Indianapolis, said the political climate in Washington is uncertain, and her clients are waiting for more telltale signs of a repeal.

“It is not going to be a slam dunk,” she said. “All bets are off in this administration. Things are very unpredictable.”

The push in Congress, nevertheless, seems to be picking up steam, with support from many Indiana lawmakers.

Sen. Joe Donnelly, a Democrat from northern Indiana, and Sen. Todd Young, a Republican from southern Indiana, are co-sponsors of the Senate legislation, known as the Medical Device Access and Innovation Protection Act. Donnelly also supported the measure to suspend the tax for two years.

“I have long said the Affordable Care Act is not perfect, and one way we can improve the health care law would be by repealing the medical device tax,” Donnelly said in a statement.

“After suspending the medical device tax, I hope we can repeal it in order to allow medical device manufacturers to hire new workers, invest in new research and technologies, and continue producing life-saving products.”

In the House, a similar bill known as the Protection Medical Innovation Act of 2017 is working its way through the system, co-sponsored by two longtime industry supporters, Rep. Erik Paulson, R-Minnesota, and Rep. Ron Kind, D-Wisconsin.

Paulson’s district is home to many medical technology companies. He has unsuccessfully tried three times to kill the tax. He said he thinks the fourth time will be the charm.

“With over 200 co-sponsors at the start of this new session, and with overwhelming bipartisan support in the past, permanent repeal should be a top priority for Congress,” he said in a statement. Several of Indiana’s nine House members also support the bill.

The nonpartisan Congressional Research Service has estimated that the effects of the tax on businesses have been small—neither as large as supporters have predicted nor as dire as opponents feared.

“The estimates in this report suggest fairly minor effects, with output and employment in the industry falling by no more than two-tenths of 1 percent,” the organization wrote in January 2015, two years after the tax went into effect.

The tax applies only to final goods sold to health care providers, such as doctors and hospitals. It does not apply to consumer goods, such as contact lenses, hearing aids and wheelchairs.

And the tax has its supporters, who say it helps fund the Affordable Care Act, which has provided health insurance to millions of people.

The Center on Budget and Policy Priorities, a left-leaning think tank, said the tax is fair, and is actually helping the industry, saying more insured people will use more health services.

“It is one of several new levies on sectors that benefit from expanding health coverage, including hospitals, health insurers, drug companies and device manufacturers,” the center said in a recent blog post.

But some device makers scoff at that, saying most of their customers are already on private insurance or Medicare. They say the growth in sales has been negligible.

“So I would say, not only I didn’t believe it at the time … but I think the facts have proven otherwise.”•