This story has been corrected.
____

At first, small-business owner Jim Dodson figured the problem must be a technical glitch. During a routine analysis of aging unpaid invoices last September, one of his employees couldn’t tie the latest figures to the company’s ledger. So Dodson asked his longtime chief financial officer, a trusted friend, to check it out and report back the next day.

The next morning, CFO David Sullivan didn’t show up for work. Dodson soon began digging into archived spreadsheets. And with each discovery, his worst suspicions curdled into downright fear.

Accounts receivable for his company, the Dodson Group, had been overstated by $2.7 million—double their true value. And $422,539 was missing from the firm’s coffers.

In a flash, Dodson, 48, understood the implications: scandal, possible bankruptcy for his firm, and prison for the 11-year employee he says had pulled off the scheme.

Dodson contacted authorities, spawning an investigation that culminated Aug. 17 in the filing of a felony wire fraud against Sullivan, 45. If U.S. District Court Judge Larry McKinney accepts a plea agreement submitted the same day, Sullivan could be sentenced to up to 20 years in prison. Sullivan could not be reached, and his attorney declined to comment.

For Dodson, the financial shenanigans spawned the most daunting business challenges he has faced since starting the office-products-distribution-and-supply firm 23 years ago.

Plenty of negotiating lay ahead, since seven-figure bank loans and supplier credit lines had been based upon company financials that were flat wrong.

First, he had to untangle the web of falsified figures that he claims allowed Sullivan to steal a little at a time for years. After that, duty demanded Dodson explain the situation to key outside stakeholders, like his bank lender, and beg for mercy while negotiating new terms. 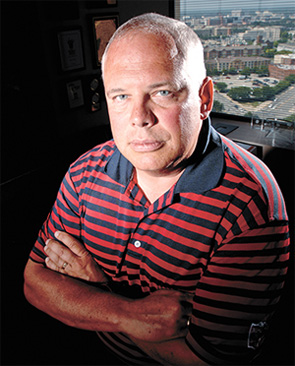 By the time the ordeal ended, Dodson had reduced the size of his business and laid off almost one-quarter of its staff, leaving the work force at 41. He now feels the company, which had $16 million in 2008 sales, is on solid footing again.

But back in September, the crisis was like a fire in the boiler room. Without a rapid investigation and recovery plan, Dodson knew his business could collapse. So would his reputation and net worth.

Years spent donating 10 percent of the Dodson Group’s annual profit to local charities would be forgotten. Instead of writing checks to support good causes, Dodson feared he’d soon be defaulting on all his debts and handing every employee a pink slip, with the last one reserved for himself.

“There was a long time when I didn’t know if [creditors or law enforcement investigators] were going to ask me for the keys to the door,” Dodson said.

There’s never a good time to learn your company’s been the victim of fraud. But in the recession, experts say stories like Dodson’s are becoming increasingly common. And small organizations are most likely to be victims, since their financial responsibilities are handled by just a few people, or even a single person.

The Penrod Society, a not-for-profit that stages the annual Penrod Arts Fair, has been experiencing a similar odyssey since December, when it accused its ex-treasurer, Brandon Benker, of embezzling $380,000. It sued Benker this summer, and a criminal investigation is continuing.

“In these economic times, hours are cut, people are laid off. People feel discouraged and some of the key people who provided management controls are gone,” said Greg Wright, a certified fraud examiner with locally based private investigation firm Jack Sandlin and Associates.

“Safeguards are gone as companies shrink in the recession. People are pressed into a corner, and they do things they normally wouldn’t do. These are times employers should be particularly wary of potential fraud.”

The risks aren’t just financial. Particularly for smaller organizations, fraud can redefine an organization’s public image, scarring its reputation. The stain of stinging headlines is sometimes all anybody remembers.

Dodson Group had a long, successful history before Sullivan, and Dodson believes the best years are still to come. He discussed his company’s struggles at length with IBJ in the hope that doing so would help other entrepreneurs avoid similar ordeals.

The roots of Dodson’s company are in West Lafayette. Nearly three decades ago, Dodson was a Purdue University student trustee as well as treasurer of his fraternity. He noticed Phi Gamma Delta was paying a kitchen supplier $2.25 for a gallon of milk. Meanwhile, the grocery store down the street had it for $2. After some checking, Dodson learned Purdue was buying it for $1.65.

That’s when he first fully understood the power of mass purchasing. Following graduation, Dodson chafed at the corporate environment at his first job with Procter & Gamble. So he founded his own firm with two partners, Tom Jackson and Jay Geshay. All remain active in the business.

The Dodson Group began by offering bargain services to other businesses for their overnight deliveries. Later, it expanded into discounted procurement of other key business needs, everything from telecommunications and software to office furniture and stationery. It does most of its business under the brand name SaveItNow!

Dodson, plain-spoken with an easy grin and a casual demeanor, is a fixture in local philanthropic circles, thanks to his efforts on behalf of groups like the Sycamore Foundation and the Indiana Achievement Awards. He and his wife, Dori, have four kids. Three are at Purdue. A fourth is in high school.

Eleven years ago, the Dodson Group was expanding and needed a new CFO. A fellow philanthropic board member recommended Sullivan, a former Ernst & Young CPA. And for years, Dodson said, Sullivan seemed like a great hire: thoughtful, hard-working, friendly. Dodson even gave him a stake in the company.

But after discovering the accounting discrepancies, and after Sullivan failed to send him an e-mail explaining what had happened, Dodson confronted the CFO.

Dodson said that, during a phone conversation Sept. 30, the day Sullivan failed to show up for work, he admitted cooking the books for half a decade, but claimed he hadn’t stolen anything.

According to Dodson, Sullivan said during that call that he had made a mistake years earlier and had decided to cover it up rather than admit his mistake. Dodson fired Sullivan on the spot, and the two men haven’t spoken since.

Dodson noted that he had hired professional accounting firms every year to verify the company’s math. But they missed all the indications of fraud, too.

“I sign all the checks that go out the door, so I thought I had pretty good control,” Dodson said. “Why didn’t I catch it sooner? If somebody really wants to do you harm, they can find a way, even with the best procedures.”

He said financial schemes frequently involve trusted employees who start stealing small amounts, then escalate. Such misdeeds are often committed by people who assume they’ll never be caught. They may also feel underappreciated, and that the company owes them more for years of unrecognized work. Personal financial difficulties can be the trigger.

“When one person controls all sides of a transaction, it becomes very, very easy for that person to become a fraudster,” Marks said. “It’s the old adage, trust but verify.”

Dodson said he doesn’t know what would have motivated Sullivan to take money.

To confront the crisis, Dodson built an investigative team that grew to include forensic accountants, lawyers, an interim CFO and a business reorganization specialist. Dodson’s father, Pete, 73, came out of retirement to assist. And his eldest son, Matthew, skipped a college internship to do the same.

“It’s kind of like triage,” Dodson said. “It was effective, but it was painful and ugly, and you sure don’t want to do it again.”

The first order of business was to schedule an emergency meeting with National City, the Dodson Group’s lender.

“They can do two things: They can gather information and learn more before making a decision. Or they can reflexively shut down, batten down the hatches and say, ‘Let’s get what we can get.’ The easy thing to do would have been to say, ‘I don’t want to deal with this.’”

O’Neil said it took plenty of persuading, but National City eventually agreed to work out new terms with Dodson, thanks to their long-standing relationship, his open disclosure, and his ability to prove the business remained sound.

Even so, the process took agonizing months.

“The core of the business was not broken,” O’Neil said. “You had a balance-sheet issue, as opposed to an earnings problem.”

Ultimately, the bank realized it would recover more from a reorganized Dodson Group than a liquidated one. Dodson next went through the same wrenching process with his largest supplier, Chicago-based United Stationers Supply Co.

“We wanted to continue to have them as a customer going forward,” said Larry Nimmo, vice president of sales for United Stationers’ Midwest region. “We valued the relationship in the past, and so we did what we needed to do to work with them and help them through the process.”

The Dodson Group completed its reorganization June 4. In all, the bank, United Stationers and a handful of company shareholders restructured $3.7 million in debt. Since then, Dodson has been quietly informing his customers about the ordeal.

Dodson hopes one day to rehire some of the dozen employees he let go. He wants to wait for the business to grow as large as the falsified books used to show.

“It was a difficult eight months. But we came out the other side a better company in a lot of ways,” he said. “We see the light at the end of the tunnel, and it’s not a Mack truck.”•