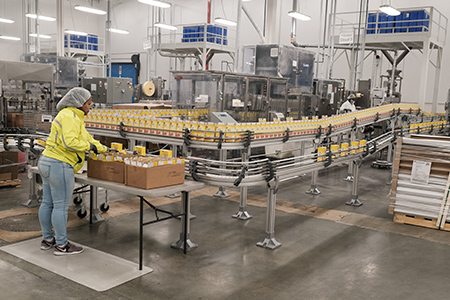 Carmel-based Heartland Food Products Group is the manufacturer of Splenda.

A study published in the journal Cell Metabolism by a group of Yale researchers found that the consumption of the common artificial sweetener sucralose (which is found in Splenda, Zerocal, Sukrana, SucraPlus and other brands) in combination with carbohydrates can swiftly turn a healthy person into one with high blood sugar.

From whole grain English muffins to reduced-sugar ketchup, sucralose is found in thousands of baked goods, condiments, syrups and other consumer packaged goods—almost all of them containing carbs.

The finding, which researchers noted has yet to be replicated in other studies, raises new questions about the use of artificial sweeteners and their effects on weight gain and overall health.

Splenda is owned and made by Carmel-based Heartland Food Products Group. Heartland, which acquired the Splenda brand in 2015 from Johnson & Johnson subsidiary McNeil Nutritionals LLC. About 850 of the company’s 1,100 employees work in Carmel and Indianapolis at the corporate office and in manufacturing and distribution facilities.

Heartland also makes a variety of non-branded products that include artificial sweeteners including sucralose.

In the Yale study, researchers took 60 healthy-weight individuals and separated them into three groups: A group that consumed a regular-size beverage containing the equivalent of two packets of sucralose sweetener, a second group that consumed a beverage sweetened with table sugar at the equivalent sweetness, and a third control group that had a beverage with the artificial sweetener as well as a carbohydrate called maltodextrin.

The molecules of maltodextrin don’t bind to taste receptors in the mouth and are impossible to detect. While the sensation of the third group’s beverage was identical to the Splenda-only group, only this group exhibited significant adverse health effects.

The artificial sweetener by itself seemed to be fine, the researchers discovered, but that changed when combined with a carbohydrate. Seven beverages over two weeks and the previously healthy people in this group became glucose intolerant, a metabolic condition that results in elevated blood glucose levels and puts people at an increased risk for diabetes.

The finding follows a study in the journal JAMA Internal Medicine last year that found that consumption of two or more glasses of artificially sweetened soft drinks a day increased deaths from circulatory diseases. And a 2008 study by scientists at Purdue University showed that artificial sweeteners alone could result in higher blood pressure, weight gain, and increased risk of diabetes, stroke and heart disease in rats.

The scientists in that Purdue study fed yogurt sweetened with glucose (a simple sugar with 15 calories/teaspoon, the same as table sugar) to a group of rats. A second group got yogurt sweetened with zero-calorie saccharin. This group consumed more calories, gained more weight, put on more body fat and didn’t make up for it by cutting back later. The researchers developed the “uncoupling hypothesis,” theorizing that disconnecting sweet taste from calories results in an impaired ability to use sweet taste to guide how much to eat and the perception of satiation.

Dana Small, divisional director of nutritional psychiatry at Yale, and her colleagues in the Cell Metabolism study wondered something about the methods in Purdue’s experiment. It was that yogurt, high in carbs.

“The uncoupling hypothesis made a lot of sense,” Small said by phone. “But we wanted to evaluate it in humans.”

The researchers found that artificial sweetener on its own did not affect metabolism, “but when you have it with a carbohydrate it’s mishandled in such a way to have an adaptation in the brain and the sensitivity to sweetness is changed.”

Insulin was significantly higher in the combination group. That means they needed to release more insulin to achieve the same blood glucose levels, an indication of decreased insulin sensitivity. That can lead to metabolic dysfunction and weight gain.

Frank Hu, professor and chair of the department of nutrition at Harvard’s T.H. Chan School of Public Health, who has done extensive research on low-calorie sweeteners, says that while this is an interesting study, the findings are somewhat surprising and need to be replicated in future studies.

“The study was short-term, and it is unclear whether the effects could last in the longer-term and translate into clinical outcomes such as weight gain and obesity. Data from previous randomized control trials lasting six months to one year have shown that substituting low-calorie sweetened beverages for their regular-calorie versions results in a modest weight and fat loss.”

Hu says that this study focused only on one type of low-calorie sweetener and a liquid form of carb, but that since each low-calorie sweetener has unique and metabolic characteristics and potential differences in liquid and solid forms of sugar, it is difficult to generalize the findings.

The FDA has approved the five artificial sweeteners saccharin, acesulfame, aspartame, neotame and sucralose as well as the natural low-calorie sweetener stevia. Splenda is one of the most popular ones on the market, debuting in 1998. It’s 600 times sweeter than table sugar, the FDA says. Its main ingredient, sucralose, is sugar that is rendered indigestible by replacing certain atoms with chlorine.

“Sucralose has been proven safe in more than 110 well-executed scientific studies over 25 years, and is supported by the American Diabetes Association and American Heart Association, and by food-safety regulatory bodies around the world,” said Ted Gelov, CEO of Heartland Food Products Group.

He said that while sugar has been proven to lead to obesity, heart disease, diabetes and other health issues, Splenda has helped millions of people to lose weight.

And yet, sugar consumption in the United States has declined over the last two decades even as obesity rates have continued to skyrocket. According to the American Medical Association, nearly 40 percent of American adults are obese.

Small and her team say the carbs and sucralose work together to confuse the brain, which then miscommunicates with the rest of the body and blunts its ability to metabolize sugar appropriately.

Ali Webster, director of research and nutrition communications for the International Food Information Council, a public relations arm of the food, beverage and agricultural industries, says the study’s methodology is flawed.

“Take this study with a big grain of salt,” Webster says. “This had no measurement of food intake over the course of those two weeks. You’d want to keep track of everything else they are eating and drinking.”

Small acknowledged, “We had no measure of food intake.” But she said: “All three groups were exactly the same at pre-test and were randomly assigned to one of the groups. The chance that there was a systematic difference in eating only in those people assigned to the combo group would be statistically highly unlikely. In no study can you ever account for every factor-that is why we randomize.”

“The question is,” Small asks, “are artificial sweeteners bad for you? We need to figure out the mechanism, but the hypothesis is that this would work with any carbohydrate.”

Lisa Lefferts, senior scientist at the Center for Science in the Public Interest, also cautions not to lump all artificial sweeteners together. Sweet’N Low, made from saccharin, has bulking agents to make its volume more comparable to sugar. Aspartame, a common sweetener in diet soda, with brand names NutraSweet and Equal, loses its sweet taste when heated (and is thus not useful in baking). Pregnant women are discouraged from using saccharin and consumer groups have cautioned about the use of aspartame and neotame since they contains a compound that breaks down to methanol.